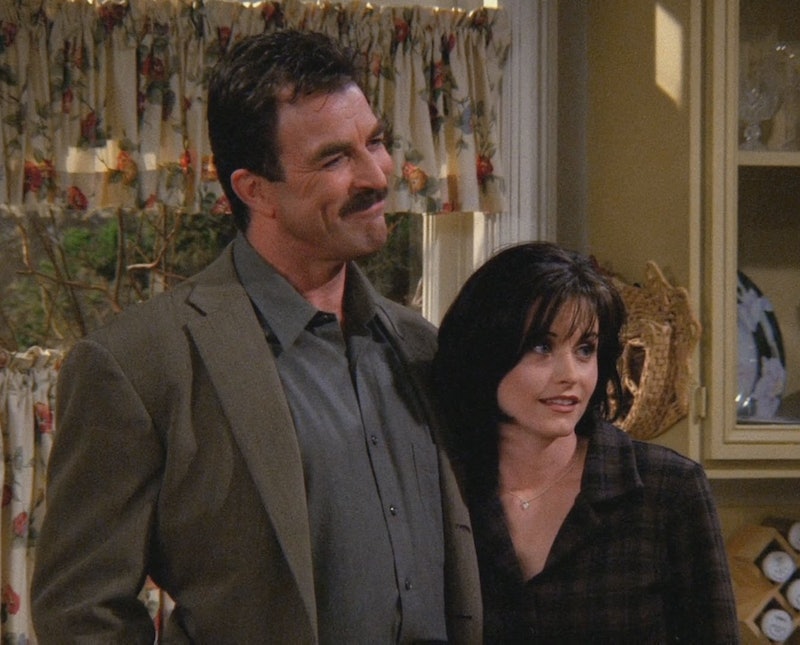 By now, I'm sure you've heard all about Hank Azaria's revelation to The Huffington Post that Phoebe almost ended up with Dave and not Mike (aka the glorious Paul Rudd) in Friends. As all fans of the show know, this would never have worked. Mike and Phoebe had adorable chemistry which was off the damn charts — and Dave? Well, he was great and all but he definitely didn't come close to Mike. The news also sent my brain into overdrive, and suddenly I was reminded of the one couple from Friends who I never actually approved of. Sorry Friends fans, but I'm of the controversial opinion that Monica and Chandler should never have been endgame. In fact, there's one person who I always believed Monica should have married, instead — Richard, played by the forever handsome Tom Selleck.

Truthfully, I could approve of Monica and Chandler's relationship up until a certain point. As friends with benefits, hooking up in secret and having a great time sneaking into each others beds at night, they were perfect. But as an actual romantic couple? They lacked long-term chemistry. They reminded me of so many romantic relationships (my own and those of my own friends), which felt as though they were born more of convenience than they were of a genuine spark.

As supremely close friends, Monica and Chandler totally worked, but their romantic plot line felt contrived and born from a desperate panic over being alone. It was the coupling of two friends exchanging loneliness for companionship, simply upgrading their friendship to romance because it was easy to.

Monica's relationship with Richard, on the other hand, was the complete opposite to this. It was complicated, difficult and full of obstacles, but ultimately, it was also full of true love and unbridled chemistry. Sure, there was the fact that Richard was a friend of Monica's parents, had held her as a baby (so weird), the age difference, and that time that Monica kissed Richard's son Timothy — but true love conquers all, guys. And I honestly believe that they could have made it work.

When Monica and Richard eventually broke up, it was over the fact that Monica wanted to have children with him. Richard, having already had kids (and even grandchildren, by that stage), made it clear that he was happy to compromise if he "had to" in order to stay in a relationship with her. Obviously, this was less than pleasing to Monica, who wanted to hear that her boyfriend emphatically wanted to have more of his own children with her, not just as a compromise.

However, he was more than positive in relaying how happy he'd be in doing the whole "4 o'clock feeding thing" and being a doting father to their child. Monica's response of breaking up because Richard felt as though children was something he had to do rather than something he wanted to do, felt a little hasty. After all, compromise is a big part of all healthy relationships, and to simply dismiss Richard's offer as being less than perfect felt as though she'd idealized a scenario which is often less than perfect.

Instead, Monica entered a relationship with Chandler, a man who would happily provide her with children and who was happy to allow Monica to take the lead in dictating the structure and the terms of their relationship. Though their relationship felt genuine and possibly healthier than the one she shared with Richard, it also felt as though Monica was simply settling for a man who could give her an idealized version of her future on her terms.

I don't know, maybe I've been blinded by notions of romance my entire life, but I do strongly believe that a healthy relationship isn't just one that's based on a solid friendship and respect, but also one that's still bustling with some kind of passion at every stage. Perhaps that in itself is an idealized concept too, but beyond their shady hook-ups at the start of their relationship, Monica and Chandler's romance barely felt passionate. It felt stable, sure, and that's great, but where was the chemistry?

In Season 6, when Chandler (pretty foolishly, let's face it) pretends to play cool with Monica's heart in order to truly surprise her with a proposal, Richard sweeps back into her life. As he tells her everything that she needs to hear (but obviously, a little too late), Monica is portrayed as being understandably confused over how she feels about her ex-boyfriend. If her feelings for Chandler were as strong as they should have been, however, then surely she would have had no doubt over her feelings and would have simply told Richard to move on with his life and forget about her. But she didn't.

The most telling moment about who may have made the better suitor for Monica comes when Chandler turns up at Richard's apartment looking for his girlfriend, and the two have a chat about their relationship with her. Not only does Chandler make the heinous joke of telling Richard off for making his girlfriend "think," (oh, so not cool, fella), but he's also clearly only worried about his own feelings, not Monica's.

He comes off as sounding like an immature kid, shrieking "it's not fair!" and referring to Monica as simply, "my girlfriend" for the majority of their conversation (come on, Chandler, don't just define her by your relationship with her — she has a name). Richard, however, just wants whatever will make Monica happy. As such he graciously takes a step back to allow her to make that decision herself, and to allow Chandler to propose to her so she can do so.

Of course, Monica does think things through and eventually proposes to Chandler. They have twins and go live in the shiny suburbs of Monica's dreams, where she can lay down coasters and obsessively hoover their supremely clean floors forever more in total joy. But she could have also have had this life with Richard had she realized that his compromise for having kids was actually an incredibly sweet and realistic offer. Furthermore, their relationship would have no doubt been so much more passionate and fulfilling than the one she had with Chandler likely wound up being. And just think how great that "yeah, I once kissed my stepson" story would have been at dinner parties. So wonderfully weird, guys. I live for those moments.