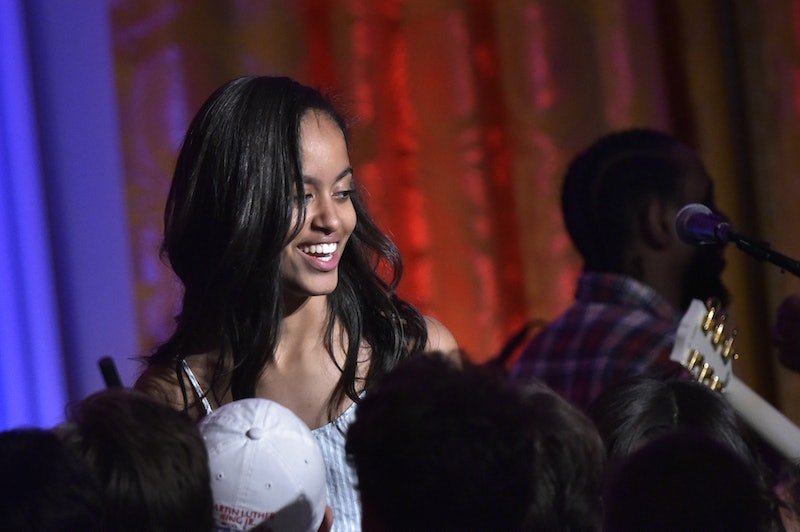 In a deviation from the presidential election but still in the political realm, a video of Malia Obama allegedly "smoking pot" has provoked all kinds of ridiculous reactions. The 18-year-old has been in the public spotlight since she was just 10, so navigating what a "normal" childhood would look like hasn't been easy. However, in attempt to pursue her personal interests, Malia has gone to Lollapalooza for the past few summers to join in the ever-popular music festival with her friends. But of course, as the current President's daughter, anything Malia does (that countless other teens are doing, too) is instantly scrutinized. And the reactions to this video of Malia at Lollapalooza prove how tough it can be for her to just live her life.

On Aug. 10, a video of Malia was published by Radar Online. In the video, it appears as though Malia holds something up to her mouth as other Lollapalooza attendees are dancing in front of her. The worst part of the Radar Online's coverage, though, was that they called this alleged act of "smoking 'pot'" a "new low" for the "wild child." These allegations depend solely on one, anonymous eye witness, according to Radar Online, but one thing is for sure: Malia's attending Lollapalooza does not maker her a "wild child" and whatever she chose to do as an 18-year-old, Harvard-bound teenager is no one's business.

It's completely unclear what Malia is exactly doing in the video. Yes, you see her hand raise to her mouth. But the video shows a slip-second of this moment, so it's pretty difficult to know for sure. Despite this, publications quickly demonized Malia. For example, the New York Post bluntly put that Malia was "caught smoking what looks like a joint" (again, you can barely see what's in her hand). They also said she "won't be able to roll her way out of this one," aka yet another ridiculous reaction.

Others have taken to Twitter to share their unwanted comments criticizing Malia. One user called for CNN to show the video on air, or else "they better NEVER say another negative comment about the Trump kids." Not sure that's how it works, but ok.

Luckily, these absurd reactions are quickly falling under the abundance of support that people have shown Malia in this time. As many are saying, she's a teenager at a music festival enjoying herself as any other normal teenager would. Malia graduated from the prestigious Sidwell Friends School in Washington, D.C., and has been accepted to Harvard University for college. She can dance how she wants and partake in whatever recreational activities she wants, and at the end of the day, it's no one's business but her own.