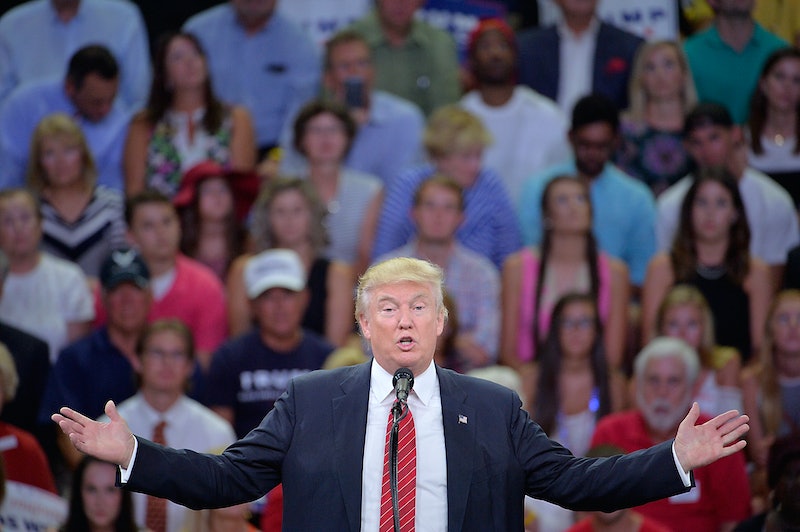 The New York Daily News has never been supportive of the GOP nominee, but according to the new editorial the paper posted online, the divisive Republican candidate has now officially gone too far. The Daily News called for Donald Trump to quit the presidential race, claiming that his comments about rival Hillary Clinton's position on the Second Amendment finally crossed the line.

Many, including The Daily News, took this as an insinuation of violence against Clinton, though Trump has adamantly declared it was misinterpreted by the "media," and it proved to be a breaking point for the long-standing news organization, which ran the editorial in Wednesday's paper.

"Trump hurtled past offensiveness into dangerous recklessness on Tuesday by suggesting violence as a means to prevent Clinton from nominating U.S. Supreme Court justices," the editorial reads. "Trump can offer no apology sufficient to make up for insidiously making light of murder. Nor can he explain away or justify planting a notion that could spur a demented follower to kill a political rival, a President or Supreme Court justices."

The Daily News has run scathing articles and cover stories about Trump running all the way back to the 1980s, including the now infamous picture of Trump in clown makeup that graced the cover after he announced his candidacy last June. Yet the newspaper had refrained thus far from calling for Trump to drop out of the race, apparently lacking sufficient cause to call for his removal. The latest comment is both shocking and enraging, but in the context of all that Trump has said and done throughout this campaign, it's sadly not much more surprising than many of his previous comments.

The Daily News' editorial is ultimately unlikely to have much impact on the election either. Although it's important to keep the story alive while much of the news cycle is currently focused on the Olympics in Brazil, the editorial is probably not going to dissuade any current Trump supporters, particularly because gun control is such a divisive and central issue in the campaign. Trump has cornered the anti-gun control movement, and those voters are unlikely going to vote for vocal gun control advocate Clinton.

The Daily News' editorial is reassuring in that there are news outlets that recognize how out of hand Trump has gotten. But it simply highlights the fact that very little is going to change. Trump has been making outlandish, offensive, dangerous comments such as this throughout his entire campaign, and nothing seems to be able to stop him. This is a scourge the American people and the international community will have to endure at least through November, and hopefully, no longer than that.