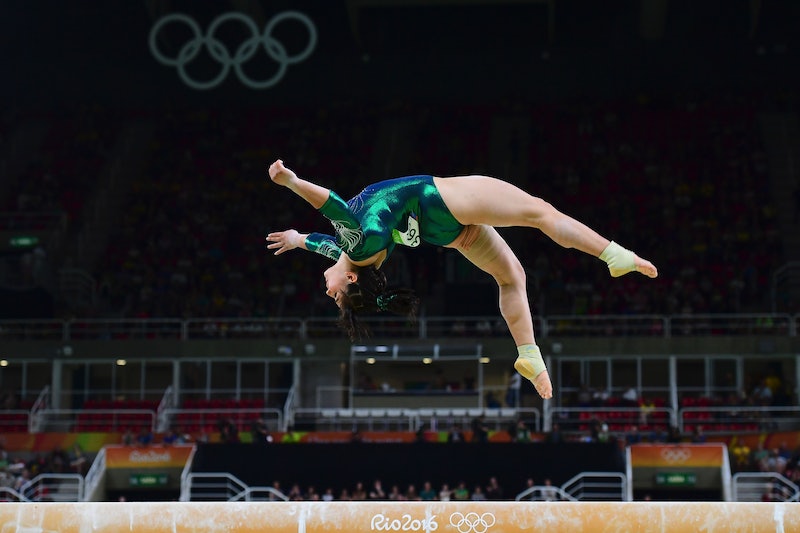 Alexa Moreno has been training as a gymnast since she was just 3 years old, and her dedication and skill have brought her all the way to the Rio Olympics. Competing this week in the Games, she finished 31st in the world, including a 12th place finish in the vault competition, which is a pretty incredible accomplishment — on top of, you know having made it to the Olympics in the first place. That is huge.

However, some people seemed less concerned with her performance or her athletic achievement, and more interested in making fun of her body.

The whole thing is not only outrageous, it also doesn't even make sense. Body-shaming is never OK, not for any person, no matter who they are. In Alexa Moreno's case, however, it is also baffling; you can't say that someone isn't fit to be an Olympic gymnast when they're already an Olympic gymnast. So the legions of people calling her fat aren't just bigoted and gross, they're also, objectively, incorrect.

Besides, this woman can do some incredible things with her body, like flip over in the air multiple times. Any body that can do that is awesome, end of story.

Plus, check out this video of her talking about her training regimen.

Something tells me the people criticizing her body aren't half this awesome.

Sadly, though, this emphasis on a woman's body over her achievements isn't exactly shocking. The hyper-attention to women's appearance and bodies that is already common in our culture is often dialed up even further when it comes to female athletes. We as a society don't seem to know how to handle women doing physical things without focusing on physical appearance instead of accomplishment — or without crediting a woman's accomplishments to the nearest man.

In this case, however, the trolls were drowned out by voices supporting Moreno in both English and Spanish.

Translation: "Congratulations to #AlexaMoreno for your great participation in the Olympics! One more reason to be proud despite all the criticism"

Translation: "We are with you."

Translation: "It is a great honor that athletes like #AlexaMoreno represent my country. #Mexico #Olympics2016"

It's always nice when the voices of decency drown out the trolls and haters.

Alexa Moreno is a world class athlete. She ranked 31st in the world at something. So honestly, unless someone is one of the 30 people ranked ahead of her, any criticism they have to offer is really just noise.