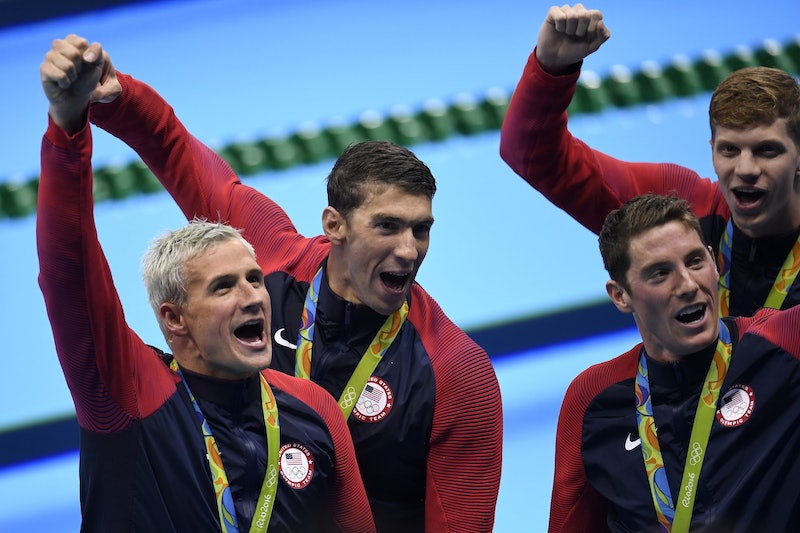 Are friendships born in the pool inherently cuter than friendships born outside of it? It's quite possible, if only given the evidence of one adorable bromance between two Olympic athletes. If you haven't been watching the Olympics, that's OK — but you definitely should be keeping an eye on the friendship between two Olympic swimmers. Michael Phelps and Ryan Lochte are great friends, even though they are also great rivals: the swimmers competed against one another in the 2004 summer Olympics in Athens, Greece, the 2008 summer Olympics in Beijing, China, and again in the 2012 summer Olympics in London, England. Now, the two are once again competing in the pool for the final time at the Olympics in the 200 individual medley. Fortunately, they're doing so as competitors who make one another better, rather than bitter, resentful rivals. Isn't that the best kind of friendship there could be between athletes?

According to Lochte's biography on SwimSwam, the first time he met Phelps was at the Olympic trials in 2004, in which he qualified second to the elite swimmer. Though Phelps is noted to be the toughest swimmer to beat out there (he has perpetually placed ahead of Lochte in Olympic events) Lochte doesn't hold that against his friend. The swimmer told USA Today Sports that while he doesn't want Phelps to win, he's not letting their shared dreams come between their friendship:

It's a challenge to beat him because he's so good... Every time I step on those blocks, a lot of swimmers think, 'I'm swimming to get second or third because [Phelp]'s in there.' No. When I go on those blocks, I'm swimming to win. It's a challenge because he doesn't want me to win, and I don't want him to win. We bump heads, and that's why our rivalry is so good. We have a friendship. Win or lose, outside of the pool we're going to be friends.

Phelps seconded that notion to ESPN:

Him and I can't stand losing to one another... We both want to beat each other as many times as we can. That's the competitiveness we both have. When we do get in the water, we're going to do everything we can to get our hand on the wall before [the other]. In every single race. And it's the same for him. We'll fight to the end, in any stroke, in any event we swim... It's a fun competition, a fun rivalry, a friendly competition. We bring the best out of each other. It's just fun racing.

It's not all about swimming with these two, though. Phelps seemed to agree with that notion when he took to Instagram to share birthday wishes for his buddy:

OK, so maybe it's a lot about swimming. But considering that these two are the most decorated swimmers in the country, it makes sense for them to bond over their love of the sport.

Seriously: look how happy these two look, bro-ing out!

These two may be forever engaged in a battle for the pool, but it's good to know that these athletes have one another's backs outside of it.