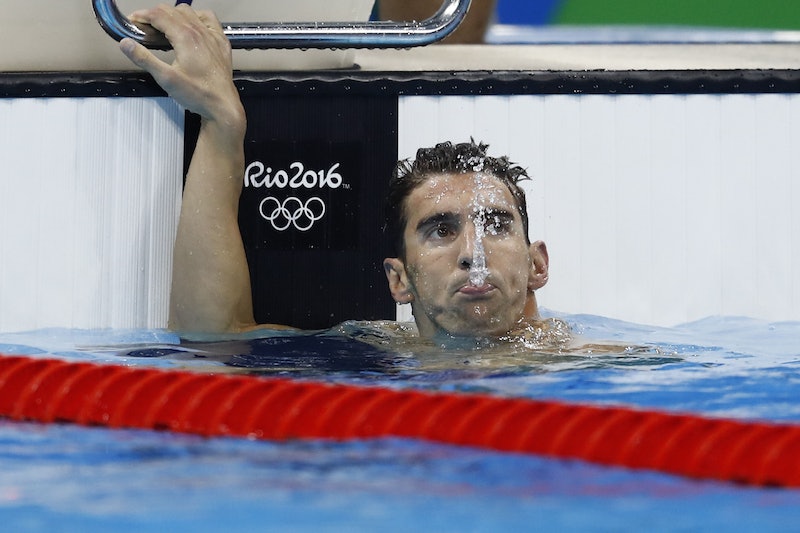 Though it might be hard to believe now, great athletes had to start somewhere. For the most decorated Olympic athlete in history, that somewhere has nearly always been in first place — at least during his Olympic career. So, while it may not be #TBT just yet, this cute photo of young Michael Phelps is the perfect throwback. And years later, as it turns out, Phelps is still dominating his sport.

Courtesy of The Baltimore Sun's very own Dan Rodricks, this photo from the paper's archives was shared on social media after the now 31-year-old Olympic dynamo took home the gold in the 200-meter butterfly — his signature event. Phelps was the youngest male athlete in 68 years to make it onto Team USA when he qualified for the 200-meter butterfly at the 2000 Summer Games in Sydney. Although he ended up coming in fifth place, he showed up at the 2004 Summer Games in Athens and took home gold in the 200-meter fly, as well in five other events. Clearly, the swimmer was destined for greatness.

With a record-breaking 25 medals on his mantle, Phelps isn't just the most decorated Olympian of all time. He's also made Olympic history as the first swimmer to make it to the finals for five Olympics in one event. This photo was taken in 2000 before Phelps had even participated in his first Olympic games.

All in all, definitely not a bad outcome for 16 years of solid work. Check out this photo of Phelps before he was the Olympic rock star that we know and adore today; not only is it adorable, it highlights a remarkable transformation from suburban swimming star to a global force to be reckoned with.

The dashing pool powerhouse is also coming pretty close to crushing another obscure Olympic record, but this time it is one that is actually from over two thousand years ago. Leonidas of Rhodes racked up 12 individual crowns (gold medals in today's games) by 156 BCE. If Phelps is able to win gold in the 100-meter fly, or in the 200-meter individual medley (or both), he'd end up besting a record that is a whopping 2,168 years old. Not a bad way to finish off a long, fruitful career.

Regardless of whether Phelps is able break Leonidas of Rhodes' longstanding record, he has come a long way from his days tearing through the Towson High School pool just outside of Baltimore. Would he do anything differently? Probably not. But you can always just ask him — if you are able to catch him, that is.