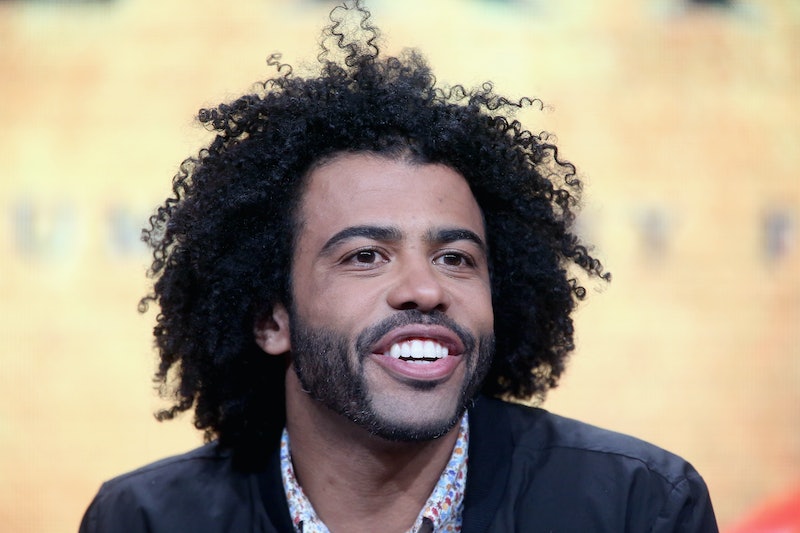 When Netflix's The Get Down premieres on Friday, the series will take viewers back to a whole other time: The Bronx in the 1970s. The show created by Baz Luhrmann and Stephen Adly Guirgis focuses on a young man named Ezekiel "Zeke" Figuero as he is introduced to hip hop, but gives the audience a glimpse of him in the '90s as a successful rapper narrating past events. So who plays older Zeke in The Get Down ? It's none other than Daveed Diggs, the Tony-winning actor who has earned acclaim for his amazing rapping and singing ability in the hit Broadway musical Hamilton. (Listen to the song "Guns & Ships" and just try not to be impressed with Diggs' skills.)

Earlier this summer, Diggs won the Tony Award for Best Featured Actor in a Musical for his roles as Marquis de Lafayette/Thomas Jefferson in Hamilton, which takes place in New York City in the 1770s and 1780s. His last show was on July 15, giving him time to take on new roles. With The Get Down, Diggs is again lending his voice to history, but this time it's a much more recent era: the '90s. As an older Zeke, aka "Books," who narrates the story of the show from (spoiler alert) onstage at Madison Square Garden, according to The Independent, Diggs raps some rhymes penned by Nas, one of the Netflix series' executive producers.

And if you only know Diggs from The Get Down or Hamilton, that's a shame, because his impressive career is so much more than those two projects. But don't worry, I can fix that. Here's what you should know about the incredibly talented Diggs' past roles and exciting future.

Diggs will join the ABC comedy series for its third season, Variety reported, as Bow's brother Johan. "He’s sort of a hipster, entitled kid who gets on Dre’s nerves,” showrunner Kenya Barris told Variety. “He’s constantly on a search for the best conditioner for his hair. He’s probably gone to Penn or Wharton and could have gotten a great-paying job, but he’s trying to find himself. That attitude more than anything makes Dre want to strangle him.” If you weren't already watching black-ish, this is yet another reason to start.

According to IMDb, Diggs wrote and performed the "Parlez-Vous Rap" for the 2016 Disney animated flick. Listen for it at 0:12 in the video above.

Last year, the actor appeared in two episodes of the long-running NBC crime drama as Counselor Henderson. One of those Law and Order episodes was even with his former Hamilton co-star Leslie Odom Jr., a fact that was highlighted during this year's Tony Awards.

Diggs is part of this Los Angeles trio along with William Huston and Jonathan Snipes, according to Pitchfork. Earlier this summer, they released an EP called Wriggle (above), which is a follow up to their 2014 LP called CLPPING.

The actor and musician is also a member of this avant-garde group with Brian Kinsman, Margot Padilla and Signor Benedick the Moor. Last month, Entertainment Weekly premiered their latest single "Modern Art," which is from their double LP soft rules currently streaming on SoundCloud (above).

Luckily for fans of his music, Diggs is currently working on his own album for release later this year, as he told the The Needle Drop Podcast earlier this year. His solo debut Small Things to a Giant was released in 2012 and is currently available on BandCamp, if you want to get an idea of what his non-Hamilton sound is like.

It's clear that Diggs' post-Hamilton future will be quite bright and it's already begun with his new role in The Get Down.