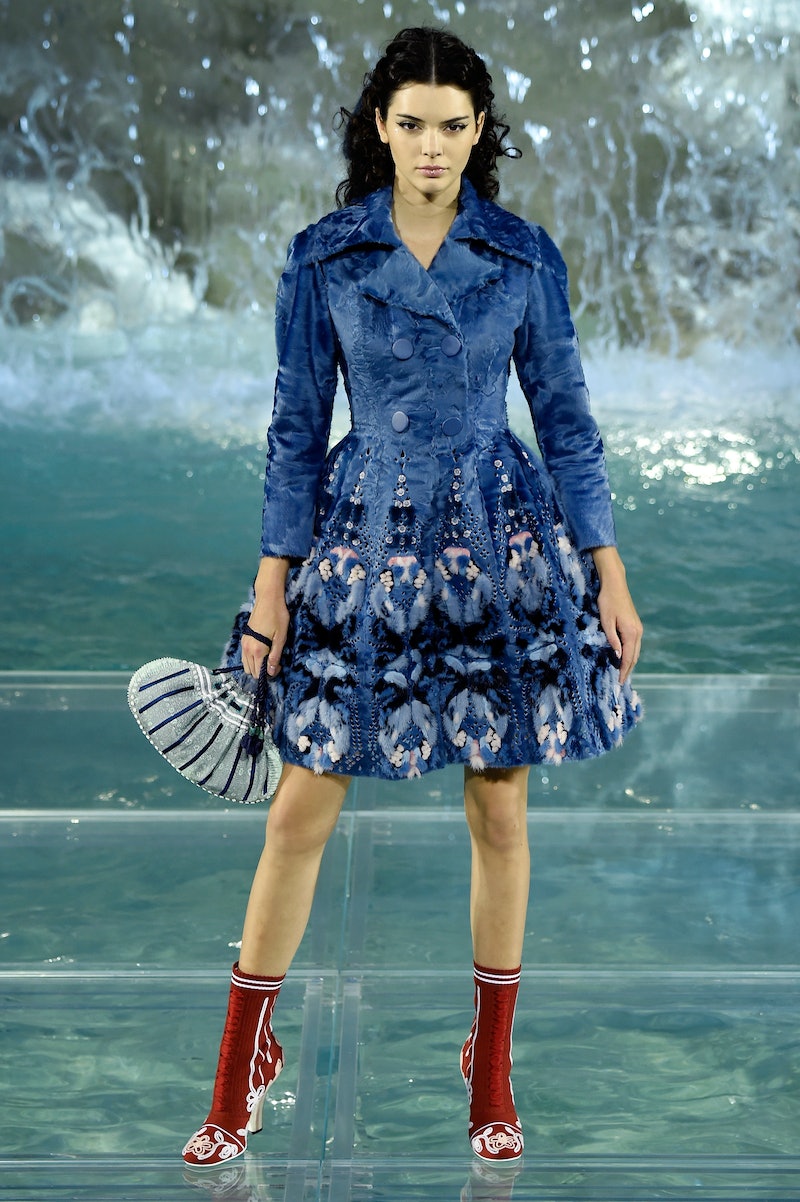 She did it — the "it" refers to one of the worst-kept secrets in fashion. Kendall Jenner covers U.S. Vogue 's September issue. This particular issue is the biggest of the fashion bible's yearly editorial calendar, so much so that a documentary was made about the infamous " Vogue September Issue" and about editor-in-chief Anna Wintour's influence. It's that much of a "thing." Nabbing this cover is a maj move for Jenner's modeling career and her fronting of the September issue has been rumored for a while.

This cover nod signals that Jenner has truly arrived. It was only a matter of time before Wintour put the supermodel on the cover of the American version of the mag. The satellite Kardashian looks insanely sexy, thanks to her bra-less, bows-and-brocade, matador-like ensemble. She shows a little sideboob and one of her eyes is obscured by her cascade of brown hair. It's about the hints of skin and what you can and can't see that makes it so hawt. Does the September 2016 edition serve as Jenner's first Vogue cover?

Update: Jenner's outfit is by Gucci. Gucci PR reps confirmed to Bustle that the model is wearing the brand via email.

No, actually. It is not Kendall Jenner's first Vogue cover. Jenner has covered several international versions of Vogue. She also covered a supplement to the April 2016 U.S. issue, which featured the always innovative and influential Rihanna on the cover.

However, this is Jenner's first proper American Vogue cover. Observe!

So that's why she chopped her normally long brown locks into a lob a few months ago. #Obsessed. She looks uh-maze!

Here are Jenner's previous Vogue covers, which all lead up to this moment.

This was the supplement to the April 2016 American edition. She was fresh-faced and crop-topped. It was also an indirect and perhaps unintentional primer for the September ish.

Jenner was red hot on the cover of the Chinese version of Vogue.

What a lovely smile and fun locks for the Brazilian edition.

She was furry and glam for Vogue Japan.

Jenner rocked quite a fierce stare and a serious collar on Paris Vogue's cover.

Jenner has also had Teen Vogue covers. So she has been embedded with the family of publications for a while now.

It's interesting to me that her debut U.S. Vogue cover landed the day after her little sister Kylie's 19th birthday, too.

The Jenner Sisters are having a grand week. Congrats to Kendall Jenner on slaying Vogue's September issue, circa 2016.