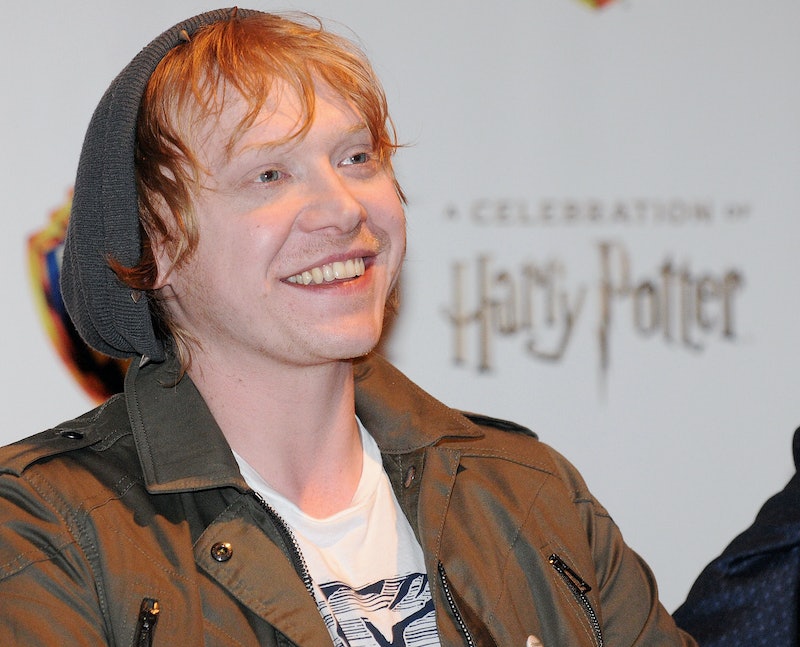 Get ready to feel all kinds of emotions, Harry Potter fans. On Wednesday night, Rupert Grint met Cursed Child's Ron Weasley during the West End production of Harry Potter and the Cursed Child. The official Twitter account for the London-based play shared photos of Grint meeting Paul Thornley, who plays the grownup version of Ron Weasley. To see the two actors side by side and know that they've portrayed the beloved red-headed HP character is wonderful, to say the least. As you can see below, they appear to be just as happy to meet and take pictures together as I'm sure every Harry Potter addict is to look at the photos.

Like Grint, a few of his other co-stars have also seen the play and met their counterparts. In July, Emma Watson met Noma Dumezweni, who obviously has taken on the role of Hermione Granger. Too bad Watson, Grint, Dumezweni, and Thornley weren't all there at the same time, because that would've been truly fantastic (and emotional). Like her movie brother, Bonnie Wright met Poppy Miller, aka Ginny Weasley in the Cursed Child production. Now, when the heck is Daniel Radcliffe going to show up and meet his Harry Potter counterpart played by Jamie Parker? He really needs to get on that and follow in his BFFs' footsteps.

Until that happens, Harry Potter fanatics can enjoy the meeting of movie Ron Weasley and play Ron Weasley.

Here They Are Posing

Here They Are Having A Chat

I think they're discussing how lucky they are to be with Hermione.

Here They Are With The Entire Cast

Just because I know you want to look at their meeting, too.

Yeah, these two are adorable.

More like this
At 14, Jenny Han Wrote Rom-Coms About Her Friends & Fan Mail To Leo DiCaprio
By Alyssa Lapid
Everything You Need To Know About The 'Knives Out' Sequel
By Grace Wehniainen
Howard Stern's Net Worth: Is He The Richest Man In Radio?
By Hugh McIntyre
The 'Hocus Pocus' Sequel Finally Has A Release Date & It Makes Total Sense
By Shannon Barbour and Radhika Menon
Get Even More From Bustle — Sign Up For The Newsletter