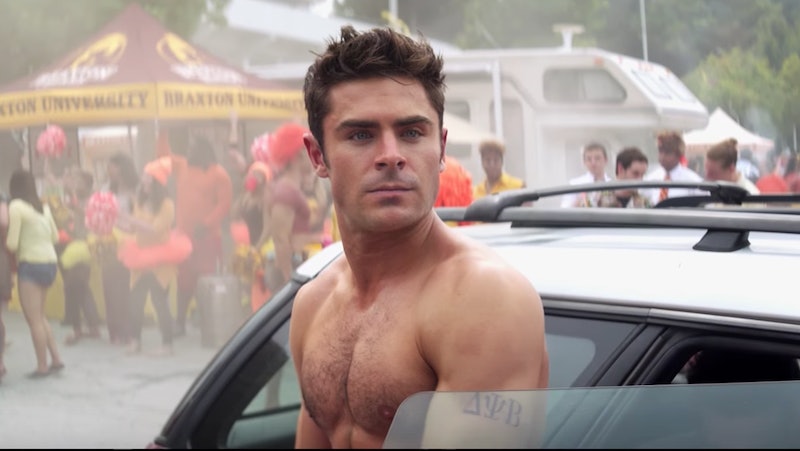 It's been a really hot summer. So hot, some days you just want to lock yourself in a room, turn up the air conditioning and pretend that the sun doesn't even exist. But, the extreme, sweaty heat is a small price to pay for the hotness found in summer movies. Summer movies are notoriously all about fun — and superheroes...and kids' movies, but mostly fun. And that fun often includes sex. This summer hasn't been overrun by sexy movies, but that doesn't mean there haven't been any standout sexy scenes. (Thank you, movie gods, for Zac Efron.) And the nine sexy scenes from summer 2016 movies will definitely make you stop and take notice.

As with any string of films, sexy summer movies aren't necessarily about sex. Some, as mentioned above, just happen to feature sexy stars like Zac Efron or Margot Robbie. Others features sex scenes, sexy dancing, or both. All in all, it's been a good season when it comes to sexy scenes, but not great when it comes to sex scenes, so, if you're looking for love scenes, you're out of luck. Love scenes aside, feast your eyes on the nine sexiest scenes from summer 2016 movies.

Kate McKinnon's wild dance in Ghostbusters definitely plays for laughs, but there's no denying that her smooth moves and hilarious facial expressions help McKinnon reach a special level of sexy that just isn't accessible for us normal folks.

Basically everything Hemsworth did in Ghostbusters was steamy, but there was something about evil Kevin that was particularly hot. Especially when he danced.

This shot will go down in history as one of the best frames in superhero movie history. Period.

5. Tarzan & Jane In The Legend Of Tarzan

Tarzan was raised in the jungle, so, when he gets it on with Jane it's pretty animalistic. You go, Tarzan and Jane.

When Mila Kunis' Amy finally gets her groove on with Hot Dad Jessie (Jay Hernandez), it's pretty steamy. Who said moms couldn't have some fun?

Harley Quinn wasn't too overly sexualized in Suicide Squad, but, let's be honest, the entire scene of Harley choosing her Squad outfit is pretty sexy. (It's also pretty voyeristic, but that's OK.)

Indignation is a dramatic tale of first love. So, obviously, there's sex involved.

OK, not to be a creep, but there's something oddly sexy and funny about watching nearly-nude Dave Franco and Emma Roberts running around a mall.

Summer's not over yet, folks, there's still time for a sexy scene to take us by storm. Here's to all the sexy scenes still ahead.