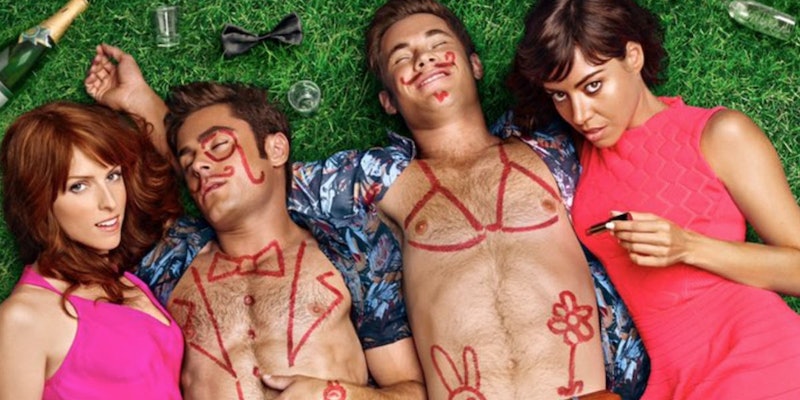 Summer movies are a unique class. With awards season in the distant future, most potential Oscar winners don't want to be released in the summer months. Add that to the fact that many moviegoers will ditch the theater for the beach, and Hollywood has to get a little creative about what will draw people in. The result is that movies released in the summer tend to be action-packed blockbusters, animated family films, and other box office bait. This coming season looks like it's going to follow the same pattern, but there will also be some seriously sexy summer 2016 movies. Amidst all the superhero and comic book adaptations (X-Men: Apocalypse, Suicide Squad) and the computer-animated kids' movies (Angry Birds, Finding Dory), there will also be romance, scandal, and some inevitable sex scenes.

You can also expect a decent amount of shirtlessness; 'tis the season, right? And although you admittedly could be soaking up similar eye candy on the beach, doing it in a place with air conditioning (and no harmful UV rays) sometimes seems like the smarter move. So if you're looking for onscreen action that's going to be as hot as the weather outside, here are the flicks you'll want to see.

Based on Jane Austen's novel Lady Susan, this period piece promises to be seductively hilarious.

Mila Kunis, Kathryn Hahn, and Kristen Bell are overworked moms who decide to ditch the PTA and minivan in favor of some wild self-indulgence. Even moms just wanna have fun.

As The Guardian succinctly summarizes: "In Luca Guadagnino’s simmering drama, two ex-lovers are disastrously reunited at a Mediterranean villa where the pool is a temple of bared flesh and sex perfumes the air." OK, I'm sold.

A comedy in the vein of The Hangover, this movie features some hilarious sexual misadventures.

5. The Space Between Us

Picture Romeo and Juliet, but Romeo is on Mars and Juliet is on Earth. This is gonna be one hell of a romantic endeavor.

A debauchery-filled spring break takes a turn for the worst in this movie, which features plenty of sex, drugs, and EDM.

Although I sobbed like a child reading this book, the adaptation looks as sweetly romantic as anything.

Any opportunity to see Matt Damon with his shirt off is a perfectly valid reason to go to the movies.

Kicking off the summer movie season is Chris Evans as Captain America, looking buff as ever. Scarlett Johansson, Robert Downey, Jr., and the rest of the Avengers make for a movie that's super-sexy regardless of actual sex content.

Adam Devine and Zac Efron are two wild brothers who are given a run for their money by two party girls (played by Aubrey Plaza and Anna Kendrick) who game their way into becoming the boys' dates to a destination wedding.

So even though you may be looking forward to summer mostly for the sun, surf, and sand, you can also look forward to some sexy movies on the big screen. In the meantime, you can push through rainy springtime days with the knowledge that good things lie ahead.