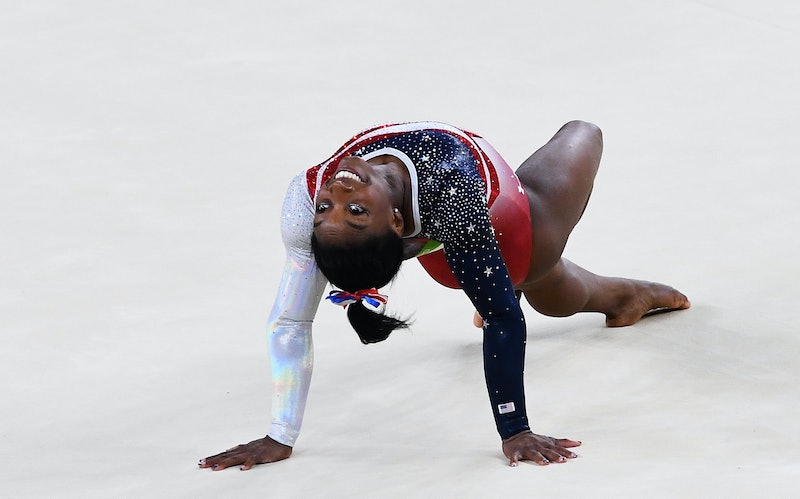 As impressive as Laurie Hernandez is on the balance beam, and Sam Mikulak is on the Pommel horse, the gymnastics event I find most incredible is the floor routine — for both men, and women. Really, what could be more impressive than Simone Biles or Chris Brooks propelling themselves through the air without the help of any equipment? Um, nothing. Yet, the floor routines performed by female and male gymnasts don't have too much in common. Why exactly is that? Why is it that in gymnastics women dance during floor routines, but men do not? Well, it comes down to history.

Men's gymnastics became an Olympic sport in 1896, and it was an event meant to showcase male strength — any athlete who can maneuver those hanging rings is undeniably strong. On the other hand, when women's gymnastics became an Olympic sport in 1936, it was not meant to showcase women's strength, but rather gracefulness instead, Scholastic reported. Therefore, women's gymnastics floor routines are performed to music, and must include dance moves, while men's floor routines strictly focus on strength — and even though the floor routine is one of only two events (vault is the other) that both male and female gymnasts do in competition, the respective floor routines look quite different.

Essentially, women gymnasts are expected to make their floor routines graceful, while still completing powerful moves — men are simply expected to focus on the power. Of course, the expectations for women and men gymnasts have evolved since the sport first became an Olympic event — and this evolution certainly is tied to evolving gender-roles outside of gymnastics, too.

Gymnasts like Simone Biles are proof that women, too, perform moves that necessitate unbelievable power on the floor. In fact, although dance moves are still required of women gymnasts, powerful moves like The Biles (it's a double half layout, with a full twist named after Simone Biles, that only Biles herself can do successfully), prove that these days, women gymnasts are all about the strength when it comes to floor routine. Vox even suggested that the American women's gymnastics team dominates because the team's athletes are by far the strongest in the sport — even if they are not as graceful as the Russian or Chinese team.

So, although women gymnasts are doing exceptionally difficult moves on the floor, they're also dancing along to the music — mostly because that's what was expected of them when gymnastics became a women's sport. However, it's undeniable that at the 2016 Olympic games at least (thanks in part to Simone Biles and Aly Raisman), the women's floor routines showcased just as much strength as the men's.

I'd like to see male gymnasts add some dance moves to their routines, too — considering that the women have to perform moves that showcase both strength and gracefulness, it seems as if the men are getting off rather easily in comparison.