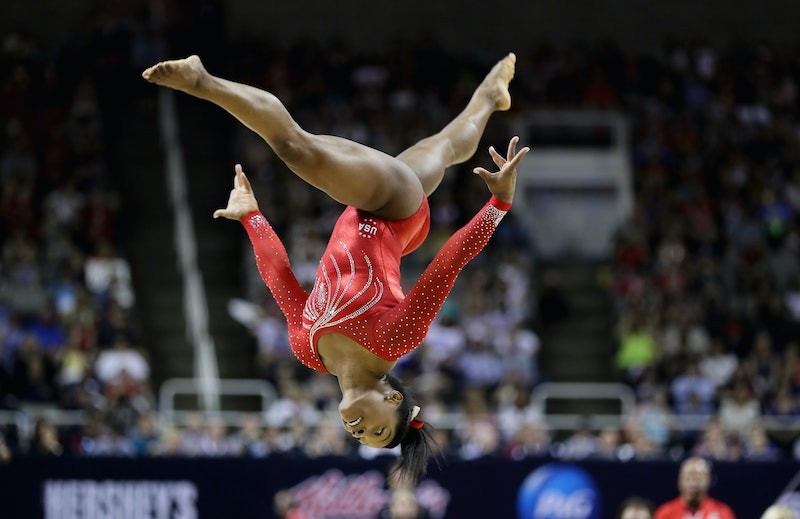 The Rio Olympics are right around the corner, and Simone Biles is set to make U.S. gymnastic history via her very own signature move. A queen of U.S. gymnastics who has never competed in the Olympics prior to Rio, Biles is the first African-American woman to have ever secured the all-around world title. Additionally, she is the first woman to claim three consecutive all-around world titles, not to mention the first in 42 years to have won four U.S. all-around titles in a row. Basically, it's all pretty inspiring.

A Texan native, the 19-year-old has a record of record-breakers that have carried her to where she is now, including 14 world medals and 10 world gold medals, which is both the most in U.S. history and in women's gymnastics history, respectively.

In July, San Jose, California hosted the U.S. Olympic Team Trials, where it was determined just who will be competing alongside Biles at the 2016 Rio Olympics, rouunding off the all-star team with Gabby Douglas, Aly Raisman, Laurie Hernandez, and Madison Kocian.

Many predict that Biles is going to dominate beam, vault, and floor exercise. She has the scores to back it up, winning 125 points and placing first in the U.S. championship.

But, according to Vox, her shining moment takes place on the floor, in the form of her very own signature move — the Biles.

In a beautifully tumbling double half layout, complete with full twist, her floor routine is not only a defying show of power against gravity. Honestly, it's poetry in motion.

When it comes to the scoring, it's important to note that there is no longer the "Perfect 10" value. Instead, gymnastic routines are scored according to a point-based system that takes into account a difficulty score (a value based on the requirements) and an execution score (a value based on, as the name would suggest, the execution).

This combination of a full score has only exemplified Biles' gold-medal talent. Aly Raisman, one of Biles' competing mates in the Olympics this year, told USA Today Sports that her teammate is able to thrive under pressure:

Even though her difficulty is so high, she’s able to control it. Usually when you have so much pressure, you see that there’s mistakes and falls. But she just doesn’t fall. She’s just so consistent, and she’s so good.

Biles is going to be the one to watch on the screen, but if you want to keep up with her both pre- and post-Olympics, be sure to follow her on Snapchat where you'll be sure to see this star on and off the Olympic floor.

In case you needed any more convincing of Biles' exceptional skills, she's also crazy good on the beam. Watch her in real time on Sunday, Aug. 7.