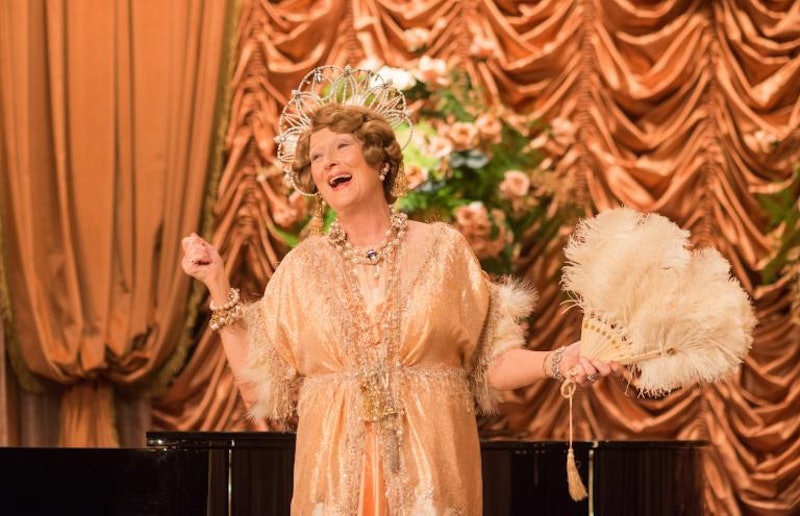 On the surface, Florence Foster Jenkins is your fairly conventional Hollywood dramedy. It stars two of the industry's most reliably compelling actors, Meryl Streep and Hugh Grant; its story, the real-life tale of New York singer Florence Foster Jenkins' road to Carnegie Hall, contains your expected twists and turns; and its messages, that of love, strength, and perseverance, aren't breaking any new ground. Yet to dismiss Florence as nothing more than a standard film is to ignore the one major way in which it changes things up — by shattering the so-called "rule" that a leading lady can't romance a younger man on-screen.

Although her specific age is never stated in the film, it can be assumed, based on Jenkins' real life, that Streep plays the character as in her late 60s or early 70s (in actuality, Streep is 67). Her husband St. Clair Bayfield, however, appears to be no older than in his mid-50s, with Grant, the actor playing him, actually being 55. Generally, an on-screen age difference this severe between an older woman and younger man is unheard of, but, in Florence, it's not presented as an issue, or even a topic worth discussion. Yes, St. Clair enjoys the youth-filled social scene of '40s New York and has an affair with a woman who appears to be in her 30s (Rebecca Ferguson, 32 in actuality). However, the reason he strays from Florence has not to do with age, but instead with Florence's declining health and a mutual understanding (in real life and in the film, the singer suffered from syphilis and thus refrained from sex with St. Clair). The age difference between Florence and St. Clair is truly only noted by the viewer, not the characters themselves.

Which isn't to say that the cast and crew of Florence were oblivious to it, however. Speaking to Bustle in New York recently, Grant said that he was "aware" of the age gap between the two characters, and appreciated its existence. "I think it’s just another hopefully fresh element in this film which does tease audiences in terms of its genres and expectations and its tone," said Grant. "It slightly disorientates audiences, and I think that’s good." Screenwriter Nicholas Martin, meanwhile, told Bustle on the Florence red carpet that he enjoys writing films about older woman like Florence because of how infrequently those kinds of stories are told. "The projects I'm working on at the moment are all tending to be for the older female audience. I think there's a whole world unexplored there, and so it's a great time to be doing that," Martin said. "There's no big idea behind it, I just think that it's a great opportunity and there are so many good stories to be told about particularly older women, so it seems to work for me."

Stories about women over a certain age are rarely told (a 2015 Time analysis showed that the average 50-year-old female actor can expect to get three roles per year, compared to the five a man of the same age would get), but, in recent months, there's been a small but sure rise. Films like Hello My Name is Doris (starring Sally Field, 69) and Grandma (starring Lily Tomlin, 76) have not only hit theaters but become box office successes, and Hollywood studios seem like they might finally be starting to realize that audiences will gladly pay money to watch stars over 50 on-screen. Yet Florence, the latest contribution to this genre, doesn't just follow this trend by casting a 67-year-old actor in its leading role; it destroys the idea that women of that age — or any age, for that matter — have to romance similarly-aged men, and proposes that their love interests can, in fact, be younger than they are.

Men, of course, have been dating younger woman on-screen forever. Seeing a male actor in his 40s or 50s romance a 20-something has become as commonplace as the rom-com itself, with Vulture in 2013 charting the disturbing routine age differences between Hollywood's leading men and women. "Leading Men Age, But Their Love Interests Don’t," the headline read, and the proof was in the numbers: Richard Gere, Johnny Depp, and more male stars all frequently dated women 10, 20, even 30 years younger than them on-screen. Although the casting of an older man with a much-younger woman occasionally stirs up controversy (Olivia Wilde's March reveal that she was once deemed "too old" to play the wife of Leonardo DiCaprio certainly raised eyebrows), it's typically ignored, dismissed as a Hollywood "rule" too unspoken to ever truly change.

Yet Florence Foster Jenkins dares to make such a change. Its decision to feature a May-December romance in reverse from the norm is remarkable both because it's so rarely done and because it's presented as such a non-issue. The age difference between Florence and St. Clair is just a fact of their lives, not a shocking scandal or a dark secret. Seeing it on-screen, their romance feels natural, due in large part to Streep and Grant's performances, and why shouldn't it? In real life, it's not uncommon for women to date younger men, and Florence is simply reflecting reality.

Perhaps the likely success of the movie ( Florence is expected to do fairly well in theaters) will convince studios to make relationships like Florence and St. Clair's more commonplace, or perhaps a change is already occurring; after all, The Dressmaker, a period drama out Sept. 23, features the 40-year-old Kate Winslet romancing the 26-year-old Liam Hemsworth. Maybe that unspoken rule claiming that only men are allowed to date people younger than them is finally being broken, one gender-defying movie at a time.