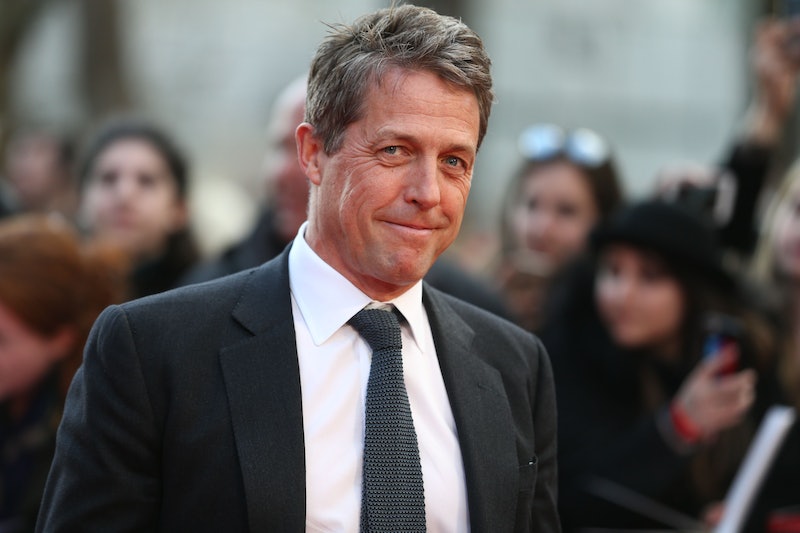 Although moviegoers vary over what they want to see on-screen, there are a few things guaranteed to bring an audience together: a new Jennifer Lawrence movie; the sight of Chris Evans' abs; and, of course, a good ol' fashioned Hugh Grant dance scene. There's something about seeing the actor show off his best (or worst) dance moves in movies that tends to unite us all, and thankfully, there's a brand new scene in his latest film, the 1940s-set Florence Foster Jenkins , that features Grant showing off his best Lindy Hop. Yet while the actor tells Bustle that he's happy with the Florence scene, his favorite on-screen dance of his own is actually from one of his earlier movies, 2007's Music and Lyrics.

"I’m rather proud of the dancing in Music and Lyrics because I invented some new steps there that I claim were widely copied," Grant says. "I believe that I am the inventor of "Gangnam Style," because I invented this motorcycle move."

He goes on to demonstrate said move, and anyone who's seen the viral video for "Gangnam Style" would catch the resemblance immediately. Adds Grant jokingly, "I’ve seen Gangnam copying that. Bastards."

Although Grant's moves in Florence may not inspire a new Psy song, they're impressive all the same, especially considering how many hats the actor has to wear for his role in the film. As St. Clair Bayfield, a real-life actor who was both romantically involved with and a manager of singer Florence Foster Jenkins, Grant plays a man who is torn between two lives: one in which he's entirely devoted to Jenkins' health, career, and general well-being, and another in which he's a carefree entertainer enjoying life as the secret boyfriend of a much-younger woman (Rebecca Ferguson). Grant says that reading the real Bayfield's diaries and letters allowed him to understand the character's complicated mindset.

"He really loved her. It was a proper romantic love, and she loved him," the actor says of Bayfield and Jenkins' relationship. "But the other thing was what a tragic character he was, really, because we see him on the outside: debonair, smooth, in control, managing her life and protecting her, suave, sophisticated. But really, at the core, he was an out-of-work actor with not much talent, and all he had was her and her crazy world."

Florence shows that while Bayfield and Jenkins may not have had a traditional relationship (because she was suffering from syphilis, they never slept together and so Bayfield strayed outside their common-law marriage), they still deeply cared about one another in their own, unique way. "I kind of love that, because we are odd and I think we should embrace it," says Grant. "This is an example of how it really couldn’t have been stranger, but there was still real love and everyone was happy."

Bayfield may have been an unusual man in an unusual relationship, but through a realized, heartfelt performance, Grant makes him come alive in a deeply compelling way — no “Gangnam Style” necessary.