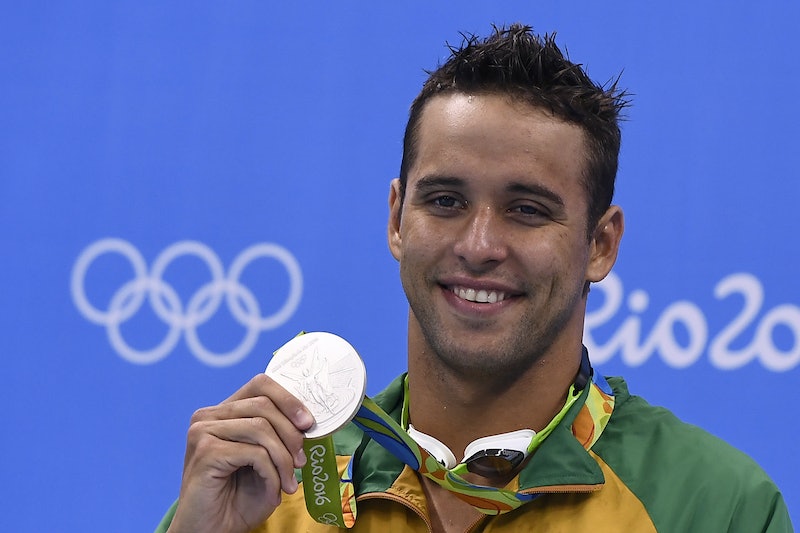 Since South African swimmer Chad le Clos has been making headlines this week — most notably for putting the angriest face ever on Michael Phelps and therefore gifting the Internet with the best meme to come out of Rio — Olympic-watchers everywhere couldn't help but notice this oooone small fact about the athlete: le Clos is an extremely handsome, almost unfairly good-looking guy. Now, while my loyalty with blazing hot Olympic swimmers lies with Ryan Lochte, it's impossible to ignore just how attractive le Clos is, with his abs and his tan and his muscles and that model-esque face. Therefore, it's only natural to wonder about le Clos' relationship status, namely if he's dating anyone and exactly how to be the lucky woman that wins him over.

Good news, everyone: The 24-year-old Olympian seems to be single, and his Instagram is literally chock-full of photos that will make you want to rip the swim trunks right off of him. Nowhere on any of his socials does a ~girlfriend-esque~ woman appear (unlike rivals Michael Phelps and Ryan Lochte, who have photos with their significant others all over the 'gram). And even more telling, le Clos told South Africa's Rapport in 2014 that the fame and attention hinders his love life — not to mention that in his early twenties and at the top of his career, le Clos isn't exactly ready to settle down just yet.

"Whenever I go out with a girl for a meal, I'm recognized and I hear 'that's Chad's girl' before anyone even approaches for a picture," he revealed to the news outlet at the time.

He also explained that his last relationship ended because his girlfriend was interested in a more serious relationship than he was.

"At 22, I am still too young for that, and I’m too focused on my swimming career. Maybe I’ll feel differently about it when I meet the right person, but that hasn’t happened yet," le Clos explained.

While that interview took place two years ago, it seems like le Clos is still primarily focused on his swimming career — he goes head-to-head with hero-turned-rival Phelps again in the 100M butterfly on Thursday — as opposed to finding The One.