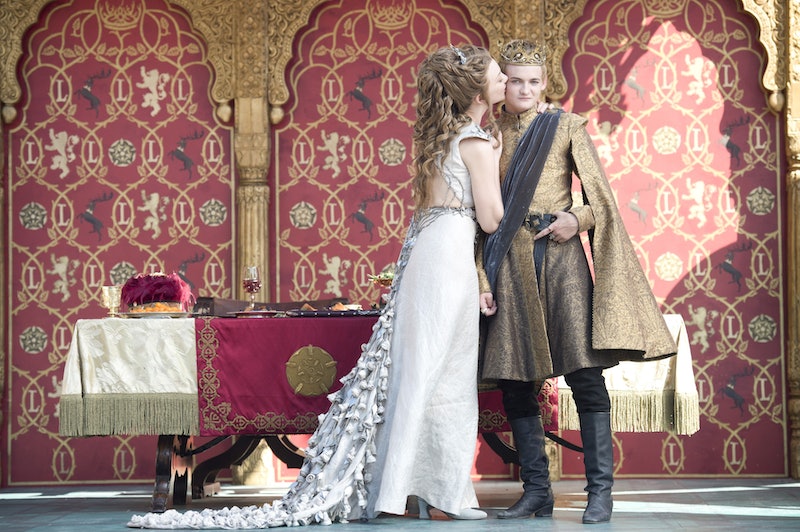 I am sure that everyone has re-watched the last couple of episodes of Season 6 of Game of Thrones about a million times each. It's easy to forget all of the events that have transpired leading up to those epic episodes, though. Remember when everyone (for the most part) was alive? I promise there was a time when all of those unfortunate souls who got blown up by Cersei were living and breathing, so I decided to go back to that time. The obvious choice for a Game of Thrones re-watch was "The Lion and the Rose" episode from Season 4, also referred to as The Purple Wedding.

I went there because it seems like it was approximately a million years ago when Joffrey was still kickin', right? Also, this was before Ramsay was turned into a Bolton and before Oberyn's head went kaboom during his fight with The Mountain. Yeah, there is a a lot to take in here. Also, who doesn't want to relive the moments where Joffrey bled from every hole in his face? It was a global catharsis like nothing fans had seen up to that point in time.

This was a crazy episode to relive. I have some seriously important thoughts about the shenanigans that occurred in this episode, and I am going to share them with you right now.

I know, that sounds weird but they are holding hands and running through the forest. I can't remember seeing Ramsay showing any kind of affection for anyone... ever.

2. Oh Yeah, They Are Hunting A Human

Oh right. Myranda has serious jealousy issues that she should speak to someone about, and Ramsay is a true enabler. Whenever you forget how repugnant Ramsay was, just watch him hunt a young girl with bows and arrows and hounds.

3. I Forgot How Unconfident Jaime Was

Having recently lost his hand, Jamie is bummed to the extreme and actually acting kind of whiney. I forgot their was a time when he wasn't super arrogant.

Bronn is seriously one of the most underrated characters on this show. Watching him show Jaime how to fight with one hand is pure entertainment. It helps that he always slips some kind of double entendre into every situation. Bronn is love.

5. Oh, Walda Frey. You Were Better Off With Walder.

I rarely say that anyone is better off with Walder Frey, but this is a situation where that old garbage bag is preferable to the fate that awaits poor Walda and future baby Bolton in a couple of seasons.

6. Remember When Ramsay Was A Snow?

Those were the good old days, huh? Seeing Ramsay's ego deflate every time Roose told him he wasn't a real Bolton yet was truly like watching a beautiful sunset. So satisfying.

What is this guy new here? Everyone knows Jon Snow, bro. Get out of here with your angry leprechaun facial hair.

8. For A Moment I Believed Joffrey Was Seriously Being Sweet

Oh, how naive I was. When Tyrion gifted Joffrey a book of the histories of the four kings for his wedding present, Joffrey seemed legitimately appreciative! Then he split it in half with his new sword because... Joffrey.

Why does he hate Sansa SO much!? This kid is such an evil little troll! Why did I forget how bad he really was? Also, he says that every time he uses the sword, it would "be like cutting off Ned Starks head all over again." I legitimately yelled at my screen, "YOU DIDN'T CUT HIS HEAD OFF, YOU FRAUDULENT HUMAN CESSPOOL!"

10. Shae Getting Dumped By Tyrion Is All Of Us

Ugh, girl. We have all been there. Just eat some lemon cakes and move on.

There goes Stannis and Co., burning up Selyse's brother because the Red Woman says they should. Raise your hand if you are SUPER psyched that you are not related to or married into this particular branch of the Baratheon clan.

Selyse needs to take a step back and think about her life choices. Dinner conversation between her husband, her husband's other woman, and herself slows down a bit, so she starts bringing up how gross and awful their only daughter is before suggesting they beat her with a rod because she's mopey. Gee, I wonder why she's glum. This lady needs to take notes from Amy Poehler's character in Mean Girls.

TOO SOON. WAY TOO SOON.

Oh man, I didn't remember Bran's flashbacks were a thing way back when. He just had a similar one to the flashback he has in Season 6 with him falling from the tower, the Weirwood tree, the shadow of the dragon flying over King's Landing, and the crows hauling ass out of the forest. Hmmm.

Margaery would be the cover of Modern Bride if Westeros had magazines or cameras.

Don't worry, cupcake. Grandma Olenna is taking care of this situation for you. Just smile and marry this little turd real quick.

17. When Olenna Is Your Mom

When Olenna (while speaking with Tywin) basically tells Mace Tyrell to go away because the grown-ups are talking, I died. Especially since he just turns around and saunters away.

18. The Wedding Entertainment In King's Landing

I feel like my wedding was subpar because I failed to hire a naked woman to perform contortions for my guests. #Regrets

Now that we know the fierceness that is Olenna, you can see her pick the jewel (filled with poison) from Sansa's necklace while pretending to give her condolences about Robb and her mom. Then, when the camera does a closeup shot, it's clearly missing. I certainly didn't see that the first time around. So subtle. So fierce. Slay, Grandma Tyrell, Slay.

She owned that boy on a galactic level. She just rubbed his arm and boom, he was doing whatever she wanted. Ugh, Margaery. Come back.

21. Loras And Oberyn Making Eyes At Each Other

I loved Oberyn and Ellaria. They were so in love and they respected each other and basically were everything missing from every relationship on this show. Also, Oberyn calling Cersei "Former Queen Regent" is so savage.

23. This "Battle Of The Kings" Play Is Uncomfortable

I want this to stop. Also, Tommen and Margaery both immediately giggle like children when it begins and I am starting to think they were soulmates. Then Margaery suddenly gets super upset and uncomfortable with the rest of us and I'm like, welcome to being a grown-up, girl.

Even watching this fake depiction of Robb's death makes me sad inside of my soul. Why did I do this to myself? I never should have come back here, guys.

26. Tyrion Is Really On His Game

"Climb down from the high table with your new Valyrian sword and show everyone how a true king wins his throne. Be careful though, this one is clearly mad with lust. It would be a tragedy for the king to lose his virtue, hours before his wedding night."

27. Joffrey Is Being The Worst

Olenna is watching like, "It's cool. You about to bleed from your face, soooo..."

Margaery, sweet angel. Way to save that hella awkward moment between Tyrion and Joffrey.

29. I Am Way Too Excited For This Kid To Die

Drink up, Joff! DRINK UP.

Watching Joffrey puke, gag and bleed from every facial orifice is extremely cathartic. I could meditate right now.

Well, that was something to see again. I forgot that so many plot points happened in that one episode. It was pretty epic and a lot more cleansing for the soul than The Red Wedding was for most people. We deserved this one after that soul crushing blow. Byeeee, Joffrey!