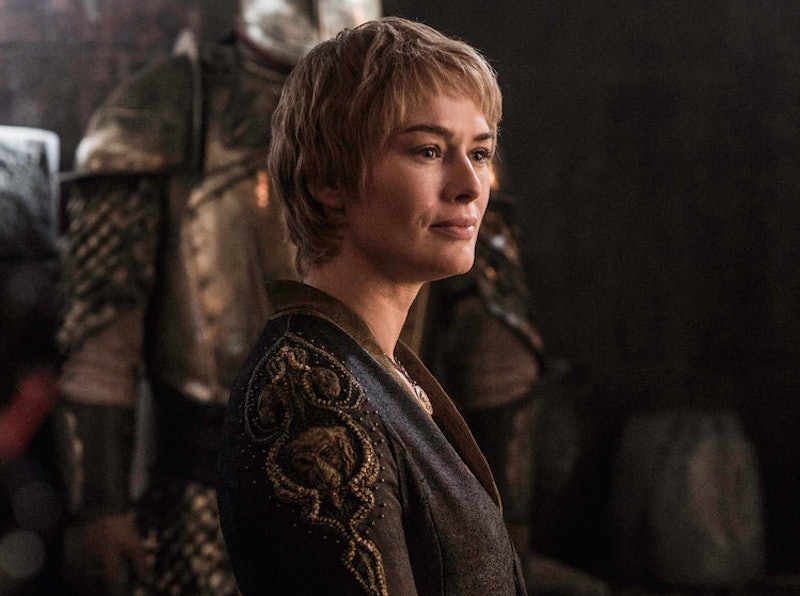 This past Sunday night, the Game Of Thrones Season 6 finale ended a superb run of episodes with a bang — literally — as the Sept of Baelor exploded, killing fully half a dozen named characters while soon-to-be-Queen Cersei gloated from her balcony and casually sipped her Peeno Noir. It was an instantly iconic moment that was just the icing on top of what was undoubtedly the strongest season of HBO's fantasy series to date.

That's a tall order for a show that has grown in the ratings every season, has earned a whopping 84 Emmy nominations over the past five years, and is hot off its first Outstanding Drama Series win last year over the likes of the final season of Mad Men and the first season of Better Call Saul (the spinoff of reigning champion Breaking Bad). Of course, everyone's bound to have their own favorite season of Game of Thrones. Solid arguments could certainly be made for both Season 1 — the original season, and the last time the Starks were truly happy — and Season 3 — which culminated in the series high (or low) point, the Red Wedding.

Maybe it's just because the high of that explosive finale hasn't quite worn off yet, but I'm ready to stake my claim that Game Of Thrones Season 6 was the best yet… and here are 11 reasons it blows the rest out of the water:

Season 5's least successful subplot was metaphorically and literally killed off in the Season 6 premiere, when Ellaria Sand and her one-dimensional Sandsnake daughters murdered Prince Doran, Quentyn Martell, and Areo Hotah in one fell swoop. They then sat out the rest of the season until they popped back up in the finale to help form an alliance with Daenerys and the Tyrells against the Lannisters.

While the elimination of a storyline may seem like relatively small potatoes in the grand scheme of things, this sequence of events was indicative of Season 6's success for several reasons: it proved that showrunners David Benioff and D.B. Weiss listen to fans, that they can acknowledge when something isn't working, and that they're willing to adapt their plans accordingly. With supposedly only two shortened seasons left after this one, it simply wasn't worth the time it would have taken them to "fix" this storyline.

There was also far less sexual violence in Season 6, and two of Sansa's best scenes this year involved directly confronting the man who sold her to her abuser and speaking plainly about the effects of his abuse… and then watching as said abuser was literally devoured by his own starving hounds.

Game Of Thrones has had violence in its DNA since Day One, and that didn't change in Season 6 — which had perhaps the highest body count of any season so far by the time the credits rolled on the finale. But something about the violence this season seemed less "brutal for brutality's sake" than usual. There wasn't anything near as awful as Oberyn Martell getting his head squashed like a melon, or Arya gouging out Meryn Trant's eyes before slitting his throat.

In fact, when you think about it, a surprising amount of the violence this season took place offscreen: Walda's and Ramsay's deaths-by-dog, Hodor's zombie encounter, the Waif's comeuppance, the Blackfish's last stand, the slaughter of Brother Ray's followers, Septa Unella's shameful torture, etc. In most cases, this didn't lessen their impact — Hodor's death was still horribly tragic, Ramsay's death was still utterly satisfying — but it did come as something of a relief after five years of gore and viscera.

Unlike in feature films, we don't often discuss the directing when it comes to TV shows; the acting and writing tend to be the more prominent aspects of the filmmaking on the small screen. The direction of GoT's big battle episodes has always been noteworthy, but this year the directors took it up a notch — especially in the season's final two episodes. Also, the impeccably staged and incredibly tense resurrection scene in Episode 2, the wonderfully trippy blending of past and present at the end of Episode 5, and the atypically pastoral atmosphere of Brother Ray's scenes in Episode 7 all stand out.

But "Battle Of The Bastards" — which brought the grittiness of a war movie like Saving Private Ryan to the television fantasy genre — and "The Winds Of Winter" — which started things off with a breathtakingly suspenseful 20-minute sequence climaxing in that deadly explosion — were simply masterful. If Miguel Sapochnik doesn't win an Emmy for directing this year, it will be a crying shame.

Sometimes, the CGI dragons and the ice zombies and the OMG-worthy plot twists can distract from the fact that Game Of Thrones actually has a lot of great acting. Being an ensemble show without a true lead, the entire cast is competing against each other in the Supporting categories at the Emmys, which means the only actors from the show who have ever been nominated are Peter Dinklage, Emilia Clarke, Lena Headey, and Diana Rigg.

But the acting is superb pretty much across the board; especially this season, which not only had some terrific new additions put in stellar work (Ian McShane as Brother Ray, Max von Sydow as the Three-Eyed Raven, Essie Davis as Lady Crane), but also saw some long-standing veterans elevate their game to a new level. Particular shout-outs to Kit Harington as post-resurrection Jon Snow, Sophie Turner as an increasingly savvy Sansa Stark, Carice Van Houten as a faith-shaken Melisandre, and of course Lena Headey as the newly-minted Mad Queen.

For a story with such a wealth of history behind it, it's interesting that Benioff and Weiss set a rule for themselves early on that they wouldn't show any flashbacks — especially since George R.R. Martin's A Song Of Ice And Fire series is rife with them, whether through dreams, personal recollections, or conversations about the past. The showrunners wouldn't break their flashback rule until Season 5's opening Cersei-centric scene… but it wasn't until Season 6 that the show truly started to tap into its vast reservoir of backstory.

One of the themes of the series, especially this season, has been the new generation trying to pick up the pieces and right the wrongs of the generation before them. But even this generation's parents were dealing with the ramifications of decisions made by their parents — and that cyclical nature of history was finally made literal this year thanks to Bran's sojourns through time.

Sure, there were still plenty of tears to be shed and nails to be bitten; but it's true that a lot of Season 6 was just plain fun in a way the show hasn't been in years. Whether it was watching Dany literally set fire to the patriarchy, seeing two Stark siblings finally reunite, witnessing a trio of dragons roasting a fleet, or hearing little Lady Lyanna read the riot act to a roomful of grown men, there were plenty of cheer-worthy moments this season — and no, you cynics out there, that's not automatically a bad thing!

It's easy for ardent fans of literary adaptations to forget, but novels and television are distinct art forms; there are things that each can do that the other can't. One of those differences — and in fact, one of the main themes of Martin's series — is open-endedness. A Song Of Ice And Fire is a sprawling tale that just keeps sprawling. Originally conceived as a trilogy, it first expanded to five entries, and now seven; it could expand even more before Martin completes it, he could make each remaining book 3,000 pages long, he could write as many prequels or spinoffs or side-quels as he wanted.

Unfortunately, HBO only has so much time and money to make 10 episodes of GoT per year. And every TV show has to end sometime. While Martin's fourth and fifth books continued expanding, adding additional point-of-view characters and taking lengthy tangents, Game Of Thrones finally started collapsing this year: eliminating extraneous subplots, reuniting long-separated characters, thinning out its supporting cast, and definitively moving towards some sort of ending. The show many no longer directly resemble Martin's "unfilmable" saga, but it's a leaner and meaner machine because of it.

Game Of Thrones made a name for itself by defying expectations — beheading Ned Stark for doing the noble thing and then killing off his wife and son before they could enact their vengeance against the Lannisters, for instance. For years, it was a show that defied neat conclusions. But part of GoT's collapsing narrative means that it's finally time to start paying off some of the story's lingering plot threads.

This means that Season 6 gave us the highly-anticipated confirmation of several long-standing fan theories, including Jon Snow's resurrection, the Hound's return, Cersei's use of wildfire, and, of course, R+L=J. These are just the signs of a story reaching its natural conclusion. When you've had a passionate audience for over half a decade, you have to start rewarding their loyalty and their patience eventually.

We don't just tune into GoT to learn the truth about Jon Snow's parents; we also watch to see the dramatic, sometimes heartbreaking, sometimes gratifying, often unexpected death scenes. And Season 6 didn't scrimp. The first five episodes in a row all killed off multiple named characters, giving us only a couple episodes' respite until the bloodbath of the final two episodes.

Hodor's mind-melting sacrifice will likely go down in Game Of Thrones history as one of the show's most iconic; Ramsay's gruesome demise as one of its most deserved; and Tommen's suicide as one of its most quietly devastating. And you have to hand it to Benioff and Weiss: leave it to them to turn the explosive Green Sept-ing into a mixed bag of emotions. Watching the High Sparrow immolate was satisfying, but did it really have to come at the expense of losing Queen Margaery?

But let's be real: the real MVPs of Game Of Thrones Season 6 were the women. By the end of the finale, Daenerys had burned her enemies to the ground and set her sights on her father's crown; Cersei rebounded from her walk of shame to become the first woman to ever sit on the Iron Throne; Sansa had overcome her years of abuse to become a strong and determined leader; Arya reclaimed her identity and started actively pursuing her own agenda; Yara defied her murderous uncle, stole his fleet, and allied with his intended bride; Gilly defended Sam from his tyrannical father; Melisandre brought a man back from the dead; Olenna Tyrell and Ellaria Sand plotted to join Dany's feminist takeover of Westeros; and 12-year-old Lyanna Mormont proved herself the most level-headed ruler in the North.

Who run the world? If we're taking about Westeros, then it's certainly the women. At this point, it's hard to imagine Game Of Thrones Season 7 topping this one… but with only 13 episodes left in the show's run, I'm sure Benioff and Weiss have plenty of surprises in store. Hopefully they're saving the best for last.