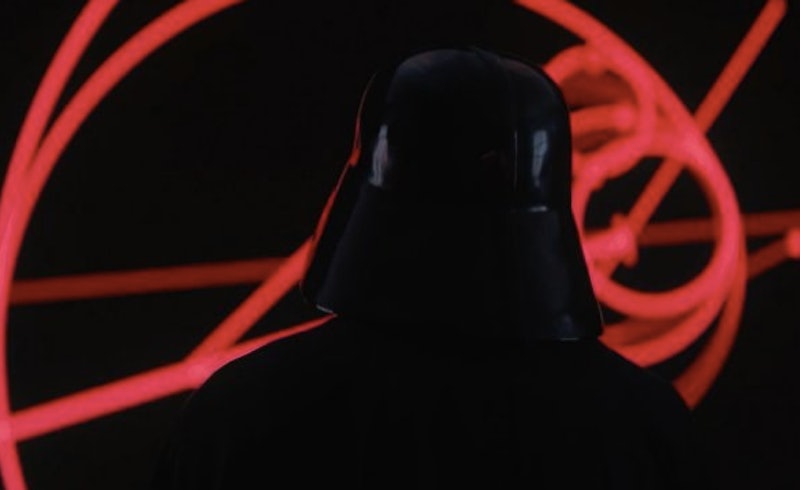 Ah, the Olympics. A time when nations from every corner of globe come together... to salivate over a new Star Wars: Rogue One trailer with Darth Vader in it. After the trailer debuted at Star Wars Celebration Europe back in July, there were whispers 'round the internet of Darth Vader's return (or his live-action return, if you consider that James Earl Jones has been voicing the character on Star Wars Rebels for a while now). And though we don't get a ton of time with our O.G. villain (you'd be forgiven for lamenting that Darth Vader's part in the Rogue One trailer is cruelly short), it is likely going to be all anyone is talking about.

Of course, that effect may be part of the reason we only get a taste of Vader. During a roundtable with reporters at this year's Star Wars Celebration, Rogue One director Gareth Edwards made it clear that keeping the focus on the Star Wars universe's newer faces is vital to maintaining that special something.

"We're not doing a karaoke number. It's not going to be just winks and fan service," he told a group of reporters in Star Wars swag as they huddled around him."The goal is that you come to the film for the reasons you love Star Wars and get sucked in to care about the new people, then as you're in the midst of all that, and all that's going on, familiar things start to pass you by ... but the film should exist on its own terms," he added.

The trailer (which also shows Alan Tudyk's droid character, K-2SO, in action) more than prepares fans for a new kind of Star Wars film, one that turns the lens away from the Jedi story for a moment, to help expand the world of this galaxy far, far away. Of course, being that the action of Rogue One happens in the not so-distant past before the events of A New Hope, the presence of the Empire is going to provide a hell of a connection to the stories we know and love.

The man's got a point, people.