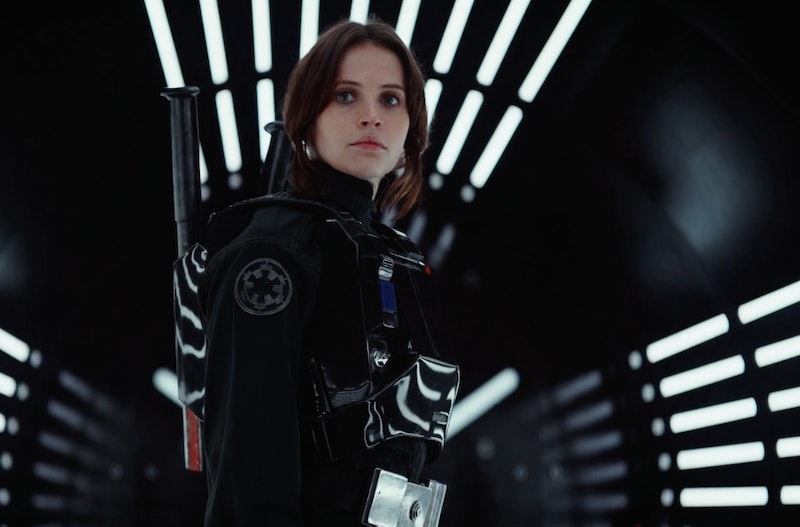 It happened, you guys. They finally showed us what Darth Vader looks like in Rogue One. And by "us" I mean "people at Star Wars Celebration Europe." But since I am one of those people, I'd be happy to tell you just what flashed at the end of the new Rogue One trailer, which won't drop for a bit longer. After confirming that Darth Vader is in fact in Rogue One (and that director Gareth Edwards had a "nerdgasm" hearing James Earl Jones record some menacing lines), Lucasfilm president, Kathleen Kennedy, introduced the footage. And yeah, it was Darth Vader in all his glory.

The moment lasts mere seconds, but as the Death Star is completed, the end of the trailer shows us the man at its helm looking over a map of his kingdom. The red light of the Death Star map gives us the iconic silhouette of none other than Darth Vader. And because Disney is just that dedicated to leaving most of the movie shrouded in mystery, we only see the reflection of Darth's outline in the floor as the camera pans towards him, but cruelly doesn't show us the real thing. But then comes the one thing that breathed life into every fan in the room: That iconic beleaguered breath.

While that's all we get and it may not seem like enough right now, remember: We are going to get to see Darth Vader in action again, you guys. You should be more thrilled than Kylo Ren thinking about his grandfather's memory right now, OK?