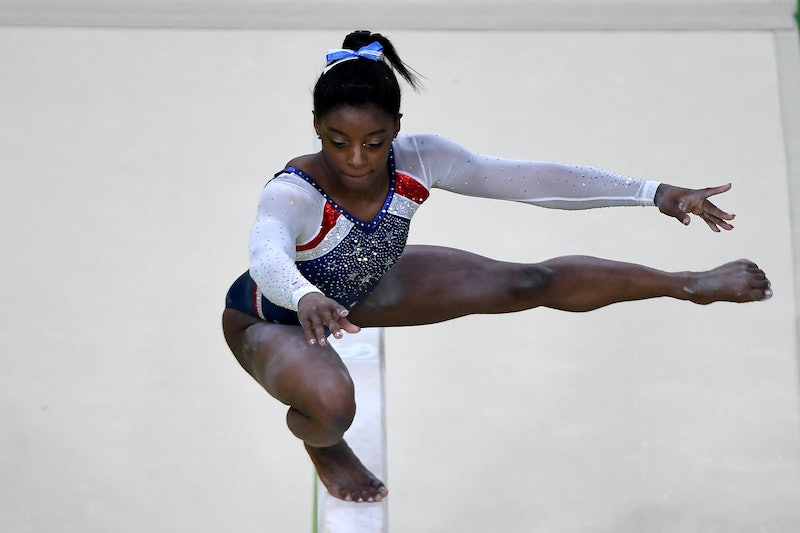 Simone Biles is an incredible gymnast, and on Thursday, she did the U.S. women's gymnastics team proud when she clinched the gold medal in the all-around competition. After she finished up on the beam, the announcer said that Biles had a "great smile." She does — she has an absolutely beautiful smile, and after a victory like that, it's no wonder she was beaming up at the crowd — but considering how much work she has put into competing during the Rio Olympics and winning the gold, it's appalling that complimenting her smile was all the announcer could come up with.

When Michael Phelps swam his way to victory earlier this week, was the announcer complimenting his smile, too? Why is precedence given to female athletes' physical appearances rather than to their stellar performances? The world is in awe of Biles, who became the first woman in two decades to win world and Olympic all-around titles back-to-back. For the 19-year-old gymnast, the Rio Games were her first time competing in the Olympics, and her score of 15.933 was the highest of the night. Of course she was smiling — she accomplished something absolutely spectacular on Thursday. So why was her smile the first thing the announcer chose to point out?

It may seem excessive to criticize the announcer for saying something that is true, but it isn't. Complimenting her stellar routine or her impressive athletic ability should have been the immediate reaction. Pointing out her smile — which is something that anyone who was tuning in would have seen anyway — was as unnecessary as it was inappropriate.

Her joy at her accomplishments should certainly be celebrated, especially considering how rarely women of color are given a chance to openly celebrate their success. However, the announcer's decision to compliment Biles' smile as she completed her beam routine made it seem like her physical appearance was somehow more important or relevant than her skills as a gymnast. I can't emphasize this enough — Biles' smile is contagious, and when she smiles, it's as though she lights up an entire stadium. But that's not the most important thing about her performance at the Olympics.

Here's how that situation could have gone a little better: Biles walks away from the beam. The announcer says, "what a great routine." Biles smiles. Everyone sees that she smiles. Everyone shares in her happiness and acknowledges how talented she is. It's the little things — the way we are intentional in our language use, for example — that make all the difference.