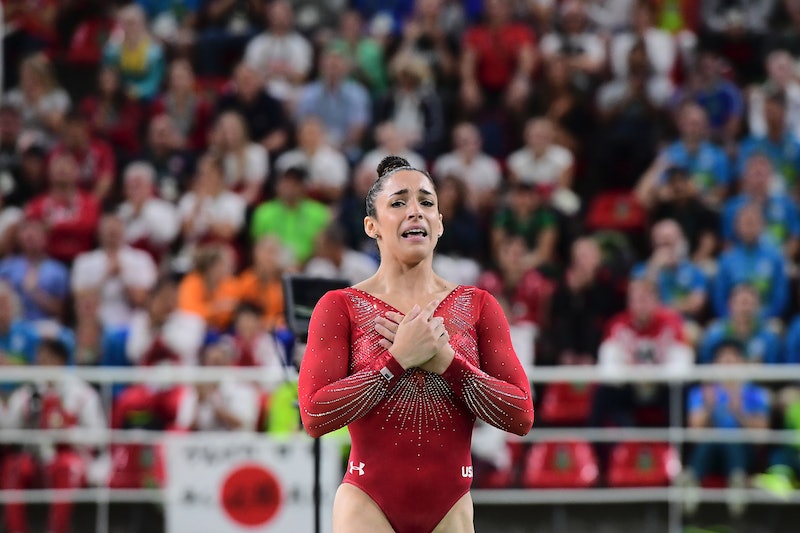 On Thursday, after the women's gymnastics all-around competition, Aly Raisman clinched a silver medal and burst into tears. Ever since she just barely missed winning a medal at the 2012 London Olympics, the 22-year-old gymnast has been training hard in order to make it up onto the podium in Rio, and she succeeded. She beat Russian gymnast Aliya Mustafina — who defeated her in a tiebreak in 2012 — by 1.433 points, and was overcome with emotion as she and teammate Simone Biles dominated in the all-around competition. Their performances marked just the second time in history that Team USA has won both first and second place in the all-around finals.

Raisman almost won the bronze in London four years ago, but because of a controversial tie-break rule, the medal went to Mustafina instead. This year in Rio, however, during the all-around competition, Raisman needed just 14.001 more points going into the final floor round in order to beat Mustafina. When she completed her routine, she knew she had succeeded, even before her medal was confirmed. She and Biles celebrated their victories together immediately following their routines; there was no doubt that they had respectively placed second and first.

Raisman's parents — whose reactions to their daughter's earlier performances have gone viral on social media — reportedly also started to cry when it became clear that Raisman had won the silver medal. The nervousness and stress they've clearly been feeling makes sense, especially after how close Raisman came to being up on the podium back in 2012. But when the numbers were in, Biles and Raisman came out on top, and Raisman's parents were finally able to breathe a sigh of relief.

This will likely be Raisman's last Olympic Games, according to the Washington Post, which is all the more reason to celebrate her incredible victory. Check out this montage of Raisman's reactions after she completed her routine on Thursday:

It's enough to get the rest of us crying, too. Everyone from Raisman's parents to President Obama was nervous about the outcome of Thursday's competition, and the gymnastics team captain certainly didn't let them down. She raised her hands in triumph following her routine even as tears rolled down her face. It was definitely a significant and memorable moment for both Raisman and Team USA. — one that will replayed for years to come.