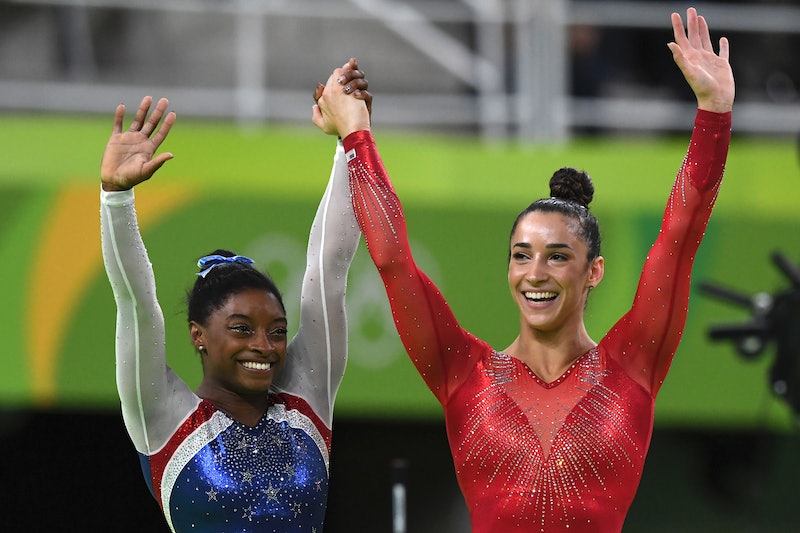 Just because you're on the same, elite Olympics team as someone else, does not mean that your relationship with your teammates goes beyond the professional. After all, this is a competition with — and in some areas, against one another — and it'd be understandable if the athletes chose to keep their distance. But that isn't the case for the world's two best all-around gymnasts. On Instagram, gold medalist Simone Biles, professed that she and Aly Raisman are "bestfriend goals" with a picture of them holding hands and waving to the audience after their monumental gold and silver medal wins. That's not just lip service, or capitalizing on an iconic moment, either. Biles and Raisman have proved time and again that their friendship is something to marvel at.

Being particularly preoccupied with all things gymnastics, I've heard quite a few commentators remarking on the sort of unlikely relationship between the two, given that they are basically each other's biggest competition. But they just don't see it that way. In fact, one commentator even sited a humble quote from Raisman in which she explained she accepted that Biles' would (and, ultimately, did) eclipse her, medal-wise. According to USA Today, the gymnast said, "I go into (the all-around) knowing that [Biles will win]. Just because she wins every single competition." To concede that seems like it couldn't be easy, but once you delve further into their friendship, you can see why it actually is.

Here is proof that, like the incomparable gymnast says, Biles and Raisman are tried and true best friend goals.

2. They're Also Kind Of The Unofficial Joint U.S. Olympian Ambassadors

The best kind of welcoming committee.

5. They Have The Best Time Together

Which is important given how little downtime they actually have.

6. No, Seriously, They Really Do

8. And, To Them, There's No Such Thing As "Stealing The Thunder"

9. Because There Is So Much Love Between Them

*Chandler Bing voice* Could they be any cuter?!

And, are vocal about it.

12. Most Importantly, They Consider Each Other Family

In the best, silliest way.

This makes their win even sweeter, doesn't it?