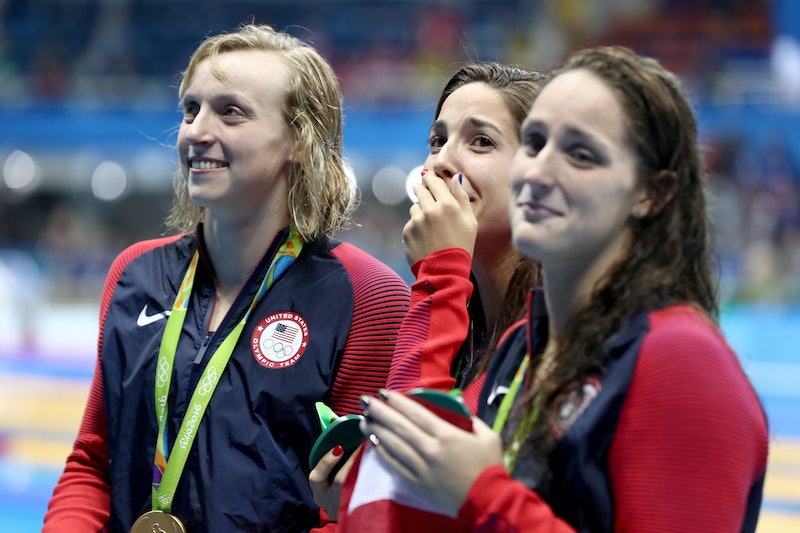 The road to the Olympics is a demanding one — not just physically and mentally, but also financially. Between the cost of coaches, gym time, expensive equipment, and — in some cases — competition outfits, training can get very, very expensive. So how exactly do Olympians make it work while also paying for their regular living expenses? One thing's for sure: it isn't easy. Believe it or not, Olympians don't get paid to train. Yep, let that sink in for a minute.

In fact, the U.S. is one of just three countries that do not provide government funding for their Olympic program. Some athletes get special funding from the national governing bodies of their respective sports, but it's usually only a limited amount. For example, The Conversation reports that U.S. swimming provides "approximately $3,000 to national team members of its top 16 ranked athletes."

Others hold down other jobs, such as waitress, coaching, modeling, or tech, while training to help balance out the costs. Many younger athletes also rely on family members to help out with the high training fees. Case in point? Ahead of the 2012 Games in London, US News reported that gold medalist gymnast Gabby Douglas' mother had filed for bankruptcy, partly due to “the high cost of her daughter’s training."

Even past Olympian champions often have to struggle to pay to continue their training. Though some star athletes (like Michael Phelps or post-2012 Douglas) are able to score highly lucrative sponsorship or endorsement deals after their wins, others aren't quite as lucky. A gold medal win only earns you about $25,000 — which doesn't go all that far, considering the vast amount of financial demands that training requires.

That's also why many gold medalists choose to go to college on an athletic scholarship after their win and before going pro. This year's breakout star of the U.S. swim team, Katie Ledecky, plans to do just that, heading to compete at Stanford this fall.

Of course, at the end of the day, these amazing athletes aren't in it for the money. They choose to compete to represent their country and excel at the sport that they love. Still, the fact that every Olympian competitor has to work so hard — both physically and otherwise— to even get a shot at the games only makes their stories all the more inspiring.