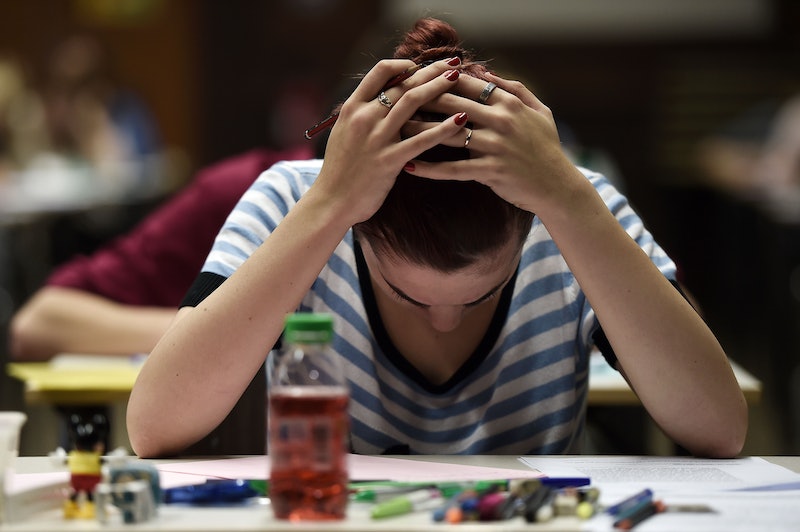 A heartbreaking new CDC survey of lesbian, gay, and bisexual (LGB) high school students has some terrible news: LGB students are more likely to be abused, attacked, and bullied than their straight peers. They are also, chillingly, four times more likely to attempt suicide. In fact, there really isn't a single statistic in this report that isn't heartbreaking.

The new CDC report, released Friday, is the first survey of its kind to look closely at LGB students. Conducted in 2015, the CDC themselves surveyed 15,000 high school students and also looked at data from 25 different state surveys and 19 surveys from large school districts. They considered a student to be lesbian, gay, or bisexual if they either personally identified that way or had had sexual contact with someone of the same sex. (It's not a perfect means of identification, given that teenagers are often still experimenting and figuring out their own sexuality, but it's probably the best diagnostic possible.) When they looked at students they considered to be LGB, they found that this group is far more vulnerable to a broad spectrum of violence than students they classified as straight.

As is consistent with every other study done on bullying, the CDC also found LGB students are much more likely to have been bullied; 34 percent of LGB students have faced bullying at school and 28 percent have been bullied online; for straight students, those numbers are 19 and 14 percent, respectively. (It's also worth noting that, although the CDC survey does not look at students who identify as trans, trans students also face many of the same challenges. Numerous studies have found that trans young people are more vulnerable to bullying, intimate partner violence, depression, and suicide.)

Obviously, all of this takes a demonstrable toll on LGB students and their well-being. A total of 40 percent of LGB students said they had considered suicide in the past year; 29 percent say they've attempted it. Less than 7 percent of straight students said the same. More than half of LGB high schoolers say they have felt so sad and hopeless within the past 12 months they have stopped doing some of their usual activities, which is a warning sign for clinical depression. More than 10 percent have skipped school in the past month due to safety concerns, which compromises their education. LGB students are also more likely to engage in risky behaviors, including being five times more likely than straight students to use illegal drugs, which makes sense, given the way that stress and trauma can often make people act in self-destructive or unsafe ways.

"Because many health-related behaviors initiated during adolescence often extend into adulthood," the CDC writes in their report, "they can potentially have a life-long negative effect on health outcomes, educational attainment, employment, housing, and overall quality of life." In other words, it doesn't always get better.

So why are LGBT young people so at risk for bullying? It's hard to diagnose a single cause, but it likely has a lot to do with the fact that LGB students are more likely to be socially vulnerable. LGB students are more likely to be socially isolated and targeted by bullies for being different, and are less likely to feel that they are able to go to an adult or parent about the bullying — something predators are able to take advantage of as well. And those fears are not without cause; there are plenty of stories of school administrators not taking homophobic bullying seriously.

The solution, then, is not just posters with anti-bullying slogans, but to promote acceptance of LGB students, and provide them with clear support, something the CDC's report emphasizes. "For lesbian, gay and bisexual (LGB) students to thrive in their schools and communities, they need to feel socially, emotionally, and physically safe and supported," they write. "CDC calls for accelerated action to protect the health and well-being of these young people. Coordinated action by schools and communities is needed to protect LGB students and address the health risks they face."

Let's hope that happens as soon as is humanly possible. Because these numbers are devastating.