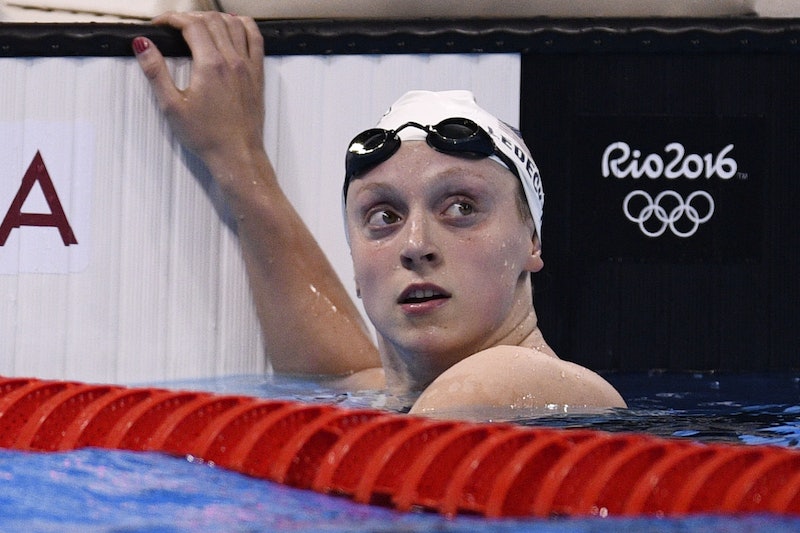 Swim Swam reported last year that Ledecky would be attending Stanford University on a swimming scholarship, though she chose to defer her enrollment until after the 2016 Olympics. She signed a letter of intent to attend Stanford in November 2014, ahead of her 2015 graduation from Bethesda, Maryland's Stone Ridge of The Sacred Heart High School. She had verbally committed to swimming at Stanford as early as May 2014, and now that the 2016 Olympics are finally taking place, Ledecky is gearing up for her freshman season this fall.

But Ledecky's decision to enroll at Stanford as a National Collegiate Athletic Association athlete has raised concerns about the financial restrictions that college athletes face. According to The New York Times, Ledecky will receive free tuition, books, and housing in exchange for her agreement to swim for Stanford — but this arrangement means that she cannot accept endorsement money or make paid appearances. That's because the NCAA has amateurism rules that prevent athletes from receiving compensation beyond their scholarships and just enough money to cover the cost of attendance.

Numerous coaches, athletes, and college professors have criticized the NCAA for essentially forcing athletes like Michael Phelps to choose between making money professionally and playing for a college team. Former UCLA basketball player Ed O’Bannon brought a class-action suit against the NCAA for commercially exploiting college athletes. But in Ledecky's case, at least, she's still excited for her freshman season, even though — according to the Chicago Tribune — she could potentially earn millions of dollars by going pro instead of swimming for the Cardinal.

“I always knew I wanted to swim in college,” Ledecky told the Times. “I’m really looking forward to the opportunity.” On the subject of compensation and amateurism, however, Ledecky added that she doesn't "think anything’s really going to change.”

As Ledecky's teammate Missy Franklin has pointed out in the past, going pro can be really difficult, and involves juggling many different commitments. Ledecky could still leave college to go pro like Franklin did, but for now, she's a talented young woman who's making her way to Stanford after making history at the Olympics — and that's nobody's decision but her own.