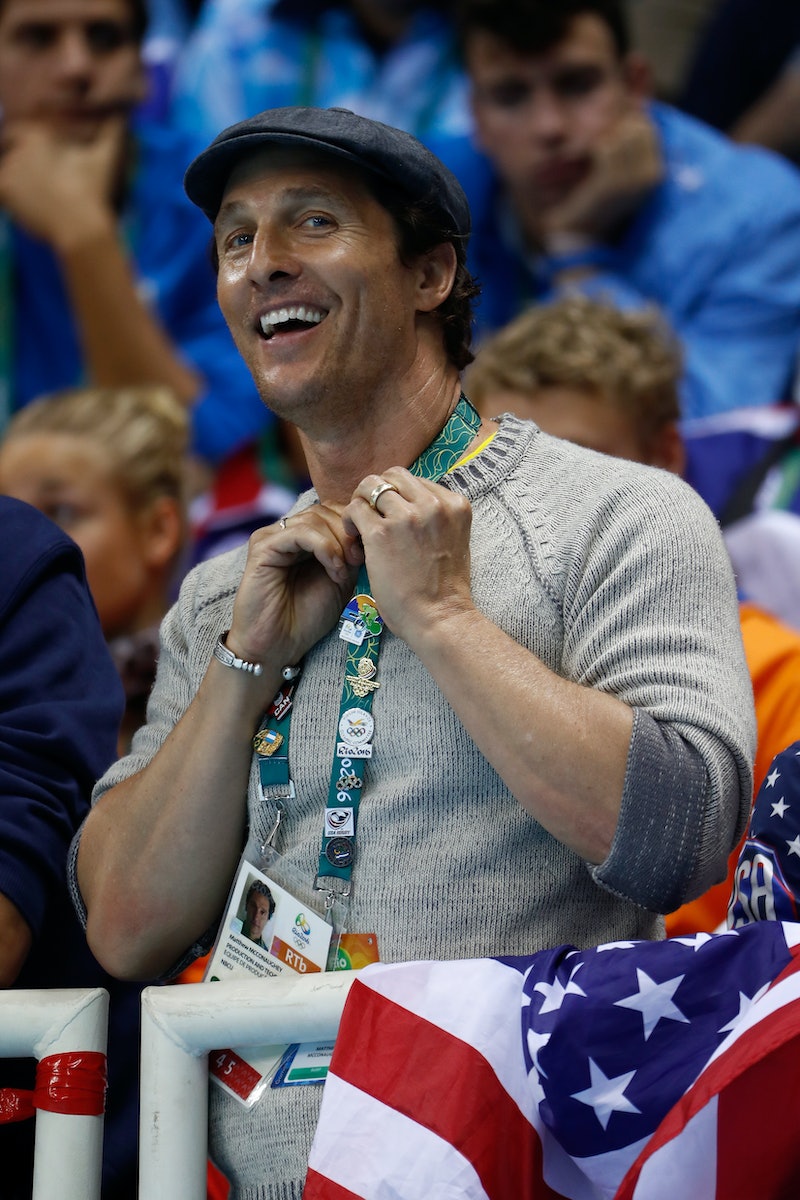 What's better than celebrity sightings at the 2016 Summer Olympics in Rio? Leslie Jones isn't the only celeb taking Rio by storm. Luckily for us, the glorious Matthew McConaughey is also at the Rio games, and has been spotted eagerly cheering Michael Phelps in the stands of the swimming finals, then supporting Team USA at other various events. Just seeing McConaughey in the stands is bound to improve the Olympic mood because, let's be honest, every athlete should have an equal opportunity to bask in his infectious, feel-good attitude. The actor is joining his wife, Brazilian-born Camila Alves, who is acting as a special "lifestyle correspondent" for NBC and E!'s coverage of the Summer Olympics. Alves may be on assignment, but it's clear that McConaughey is all about having fun during his Rio trip. Who can blame him?

Over the course of the first full week of the Olympics, the toothy Texan has been spotted all over Rio. He wrestled a rugby player on Ryan Seacrest's Olympic Late Night, followed Rickie Fowler during the golfing events, and, perhaps most noticeably, was poolside during the many swimming competitions. Like most other fans, McConaughey made it clear that swimming was one of his favorite sports and that his has nothing but love for Michael Phelps.

Even better, it was during one such swimming event that the most amazing Olympic moment occurred when McConaughey met fellow Rio superfan Leslie Jones. These two really should come back to the next Olympic games and act as celebrity commentators. Check out this chemistry, soak up these vibes:

While McConaughey began his time in Rio fervently cheering on Phelps, it clear that regardless of who's competing, he's all about Team USA. From swimming to golf to basketball to rugby, McConaughey has been snapped at every event actively supporting his home country the best way he knows how —with pride and joy. This is McConaughey's first time at the Olympics but with his affectionate display of support for the Olympic athletes in Rio, it certainly shouldn't be the last time he pops up on the Olympics radar.