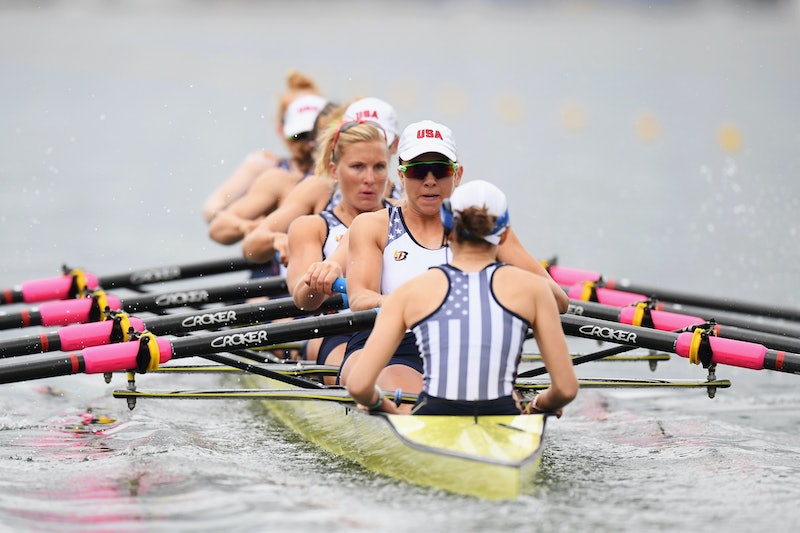 When it comes to dominating Olympic chatter, no one can beat the Final Five. The U.S. women's gymnastics team is one of the most talented groups of athletes ever assembled, and they deserve every ounce of praise they get. But, they're not the only U.S. women's team obliterating records this Olympics: the U.S. women's rowing team is an eight-woman crew of pure talent that deserves major respect too.

Rowing is not as popular as gymnastics, but maybe it should be, especially when it comes to the U.S. women's team. On Saturday, August 13, the team added another medal to their growing list of accomplishments, meaning the team has now won 11 straight world and Olympic titles — completely dominating the field for more than a decade. Additionally, they have won every major global championship possible in the past 11 years. Yes, they are that good.

So who makes up this team of rowing legends? Katelin Snyder, Eleanor Logan, Amanda Elmore, Tessa Gobbo, Meghan Musnicki, Emily Regan, Lauren Schmetterling, Amanda Polk, and Kerry Simmonds. The team has evolved during its historic winning streak, gaining and losing members along the way, but there is a history of excellence each new team member feels compelled to uphold. In a Team USA profile, Snyder explained it is not about any one member of the team dominating, but rather about everyone working together to maintain the legacy of the team as a whole.

"Everyone has this incredible drive to be faster and be better and to make their teammates faster and better," Snyder explained. "The team is so deep that really anyone can get in the boat and it will go fast."

As a sport, rowing is less individual than gymnastics, but it is no less impressive. The eight women who form team USA have to train hard and move together as one in order to out race the competition. As coxswain, Snyder is in charge of steering and keeping morale up in the boat. Her role is to act as a motivator for her team, pushing them to ignore the other boats and focus on rowing as hard as possible as they head toward the finish line.

Rowing is a sport where strength, focus, and the ability to work in unison with your team matters more than anything else. The U.S. team has mastered the skills it takes to not just win, but to dominate. With their latest gold, the U.S. women's rowing team has solidified their place in the history books.