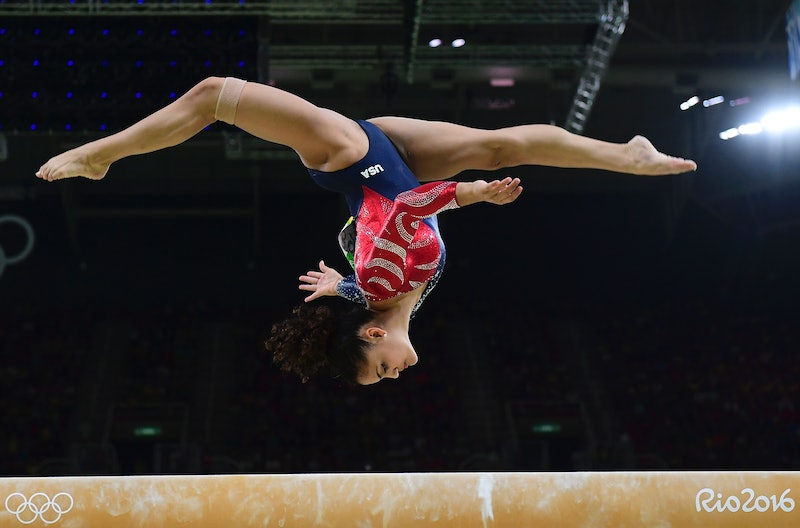 Are these Olympic athletes total #goals or what? Watching them is inspiring beyond words, and it goes without saying that they probably live in the gym. But is it that simple — just a matter of spending day after day training in the gym? In searching for more information about how many hours Olympic athletes practice, I happened upon an interesting nugget of information: According to recent research, the hours spent in the gym account for just a fraction of an athlete's success.

The study was led by Case Western Reserve University psychologist Brooke Macnamara, whose team performed a meta-analysis of the practice and resulting performance of nearly 3,000 athletes across 34 separate studies. The shocking finding? Practice accounted for only 18 percent of performance. That's not to say this is a small percentage — but it certainly tells us that there are clearly other things at work than the 10,000 hours of "deliberate practice" espoused by Malcolm Gladwell's Outliers. What's more, once you get to a certain level, the hours spent practicing stop differentiating athletes. In fact, in looking at elite athletes, practice accounted for just a one percent difference.

Make no mistake about it: This doesn't mean that you can forgo hours of practice and still excel. It simply means that these athletes are doing other things to become as awe-inspiring as they are, too. So what are those things, exactly? What are athletes doing — aside from practicing — that make them so phenomenal? Let's take a look at the other factors that affect an athlete's performance:

1. Sleep And Time To Recover

I think many of us underestimate just how important it is to stop working out for brief periods. In fact, rest and recovery are just as important as training! When you work out, tiny tears form in your muscles. This tissue heals, repairs, and grows when you rest. Brent Callaway, the International Performance Director for Athletes' Performance, told Livestrong, "The world’s top athletes don’t consider massage, stretching, adequate sleep ... 'optional.' Such activities are part of the fabric of their days and how they approach performance."

Athletes who go hard know how crucial sleep is. "Sleep is huge in my sport. Recovery is the limiting factor, not my ability to run hard," Olympic marathoner Ryan Hall said according to Arianna Huffington's book Thrive. "I typically sleep about eight to nine hours a night, but then I make sure to schedule 90 minute 'business meetings' — aka naps — into my day for an afternoon rest." You hear that? An Olympian who naps! In fact, he attributes the rough year he had as a freshman in college to inadequate rest.

2. The Proper Nourishment And Fuel For Your Body

You cannot — I repeat, cannot — be a stellar athlete with a bad diet. These people aren't concerned with how they look. And while certain sports do split athletes into weight classes (like Olympic weightlifting), overwhelmingly, athletes just want to eat whatever is going to give them the fuel they need to do their sport.

Olympic swimmer Eric Shanteau shared what he typically eats for breakfast with Eating Well in 2012, and it's no joke. "I shred a plain wheat biscuit, dump some Grape-Nuts on it, and add some kind of vanilla almond nut cluster. Then I put in a handful of raisins, a big spoonful of ground flaxmeal, a handful of walnuts, raspberries and cut-up kiwi with the skin on. I put a splash of almond milk on there, then put some type of organic yogurt on top. It's a pretty heavy bowl." Uh... you think? (Although it also sounds delicious, so there's that, too.)

Of course, these athletes' food intake probably depends heavily on their sport. But there's one thing for certain that these people will all agree on: Diet is crucial. "I love delicious things as much as the next person, but eating to boost my performance as a rower has made me very attuned to what my body responds well to and what slows it down, and that helps me continue to make good choices," explained Olympic rower Esther Lofgren to the Huffington Post in 2013. Similarly, said soccer player Heather O'Reilly to Delish in 2012, "Because we are breaking down our muscles so much from training, it's crucial for us to refuel ourselves properly."

3. Taking Care Of Your Mental Well-Being

This is yet another reason rest is important — because over-training can have serious negative side effects, both physically and mentally. But Olympic athletes aren't all automatically prepared for the stress, pressure, and nerves that come with their territory. Just like their training, just like their diet, they have to work at it. As gold medal-winning decathlon athlete Caitlyn Jenner once said, "You have to train your mind like you train your body."

Gymnast Shannon Miller echoed a similar thought during an interview with the Dana Foundation, "The physical aspect of the sport can only take you so far. The mental aspect has to kick in, especially when you’re talking about the best of the best. In the Olympic games, everyone is talented. Everyone trains hard. Everyone does the work. What separates the gold medalists from the silver medalists is simply the mental game."

It's more evident than ever that becoming an elite athlete is about more than sweating bullets in the gym. These people truly adhere to a specific, all-encompassing lifestyle. The dedication and discipline are remarkable. Being an Olympic athlete requires unshakable concentration in all aspects of life, and these people won't let anything slip through the cracks.