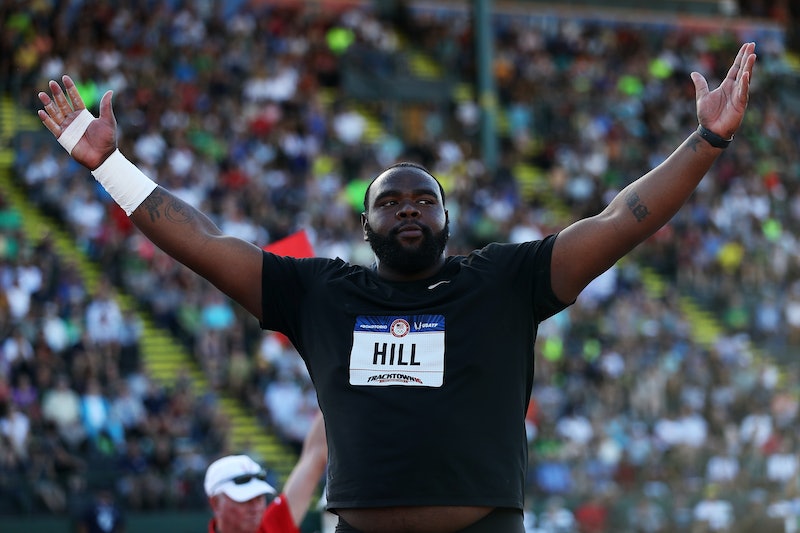 The Olympics is a time not only for amazing athletic feats but also for inspiring stories. Be it Simone Manuel gaining a historic place in the Olympic annals or Yusra Mardini's literally life-saving swim that led to her taking the Rio stage, there is no shortage of personal histories that inspire and warm viewers' hearts. There is now officially no story more heart-warming than how Olympic U.S. track and field athlete Darrell Hill's father was able to join his son, a first-time Olympian, in Rio. Get the Kleenex out, this story is going to hit you right in the feels.

Retired bus driver Ellis Hill was able to join his son at the 2016 Summer Olympics thanks to the actions of a total stranger. As luck would have it, Hill (now working as a driver for Uber) picked up Chicago resident Liz Willock at the airport when she flew in for the Democratic National Convention. During the drive to Willock's hotel, the conversation turned to the Olympics and Hill was able to brag a little about his son competing. When Willock asked if Hill was able go to Rio to see his son, Hill said he couldn't afford it. As Hill put it, "I was content with just staying home and getting a good bag of popcorn and watching him on TV."

But that didn't sit well with Willock. According to NBC Olympics, after offering to buy Hill plane tickets to Rio, she created a GoFundMe page that, in the shockingly short span of two days, raised over $8,200. And there it is. I just got hit right in the feels, guys. Did you? Now, Hill is actually in Rio with his son, able to cheer him on in person like many other Olympic parents.

When Darrell Hill was interviewed for ABC News, he told reporter Charlie James that his dad is "such an amazing man [who has] done so much for me. So it was so awesome that the American people were so able to give back and help him get down here to watch me compete." Hill also added that his dad has always been supportive of him: "He kept me grounded and made sure I always put my best step forward. Things weren't always going positively for me and there were some times where it got rough, so I was always able to call my dad and talk to him..." Do you need the Kleenex yet? I can't handle (in a good way) just how tight-knit and supportive both Darrell and Ellis Hill are of one another.

Hill's story not only tugs the heartstrings, but demonstrates that there is still plenty of kindness left in the world. Given the sometimes cynical landscape we are subjected to, the Olympic games and the stories coming out of them seem to promote the notion that kindness can be found even in the most unlikely places.