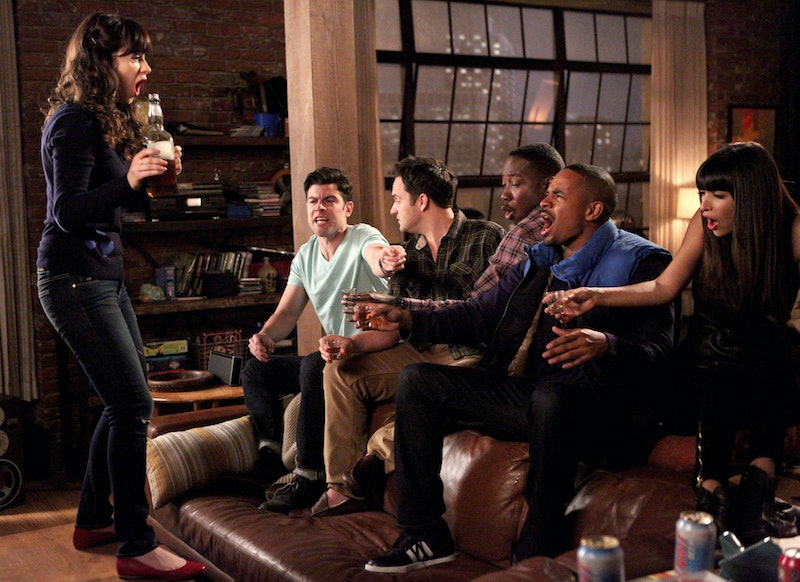 The major hallmark of Fox's New Girl isn't the regrettable decision to use "adorkable" as a marketing tool or the fact that Zooey Deschanel's hipster spectacles are clearly just for extra cute show, it's that ungodly gargantuan loft in which Jess, Nick, Coach, and Winston somehow live.

The four-bedroom apartment may have the bathroom of a rundown public elementary school, but it's a top floor loft that's all windows — we're talking three walls with windows — with rooftop access and a huge, gorgeous kitchen, space for both a living room and a full dining room, and laundry in the apartment. Not to mention the oodles of style. This got us wondering: how much would it cost one to live like the New Girl ?

Well, let's just say that Jess' teacher's salary would probably be cutting it close. According to the Hollywood location scouting blog I Am Not a Stalker, the exterior of Jess and Nick's building is actually the exterior of the Binford Lofts in Los Angeles' Arts District to the East of Downtown Los Angeles, which would explain the cityscape view when Jess and her roommates step up to the roof for drinks or serious chats or all-important tomato-celebrating freeze frame jumps.

So, we took to the perilous world of Los Angeles real estate to see just how close we could come to the New Girl dream. Step one: the Binford Lofts themselves. There's just one giant problem because while the building is all windows, it's all windows to one-bedroom loft apartments. So, at the very least, you might be able to live Schmidt's (temporary) dream — minus the part where he had a guest room — for $2,159 - $3,191 a month, according to Trulia. That's a pretty penny, but hey, you can't put a price on infinite sunlight through those giant warehouse windows, now can you?

But what about those folks who aren't rolling in Schmidt-level cash and still want the communal Arts District experience? We hit Los Angeles Craigslist to see what sorts of spaces someone like Jess might have found when she went in search of new roommates in the pilot episode. While $3000 one-bedrooms and studio lofts with remarkable square footage abound (and keep in mind, according to Jess' super, too many people are living in their loft apartment, so squeezing in more bedrooms could be a possibility) there weren't too many options in the artsy, desirable Los Angeles neighborhood for a young, low-salaried teacher.

We found one option that might possibly fall with in Jess' budget at $950 for a room in a two-bedroom loft, but that doesn't leave much room for all the New Girlian hijinks that can happen when you share an even bigger loft with three roommates instead of one.

Perhaps on a different day, we might find the unicorn-esque posting for a reasonably-priced bedroom in an Arts District loft with three hilarious roommates and incredible furniture, but even if it does rear its mystical head, we must agree that living the Jessica Day dream is one in a million. Quite possibly literally.