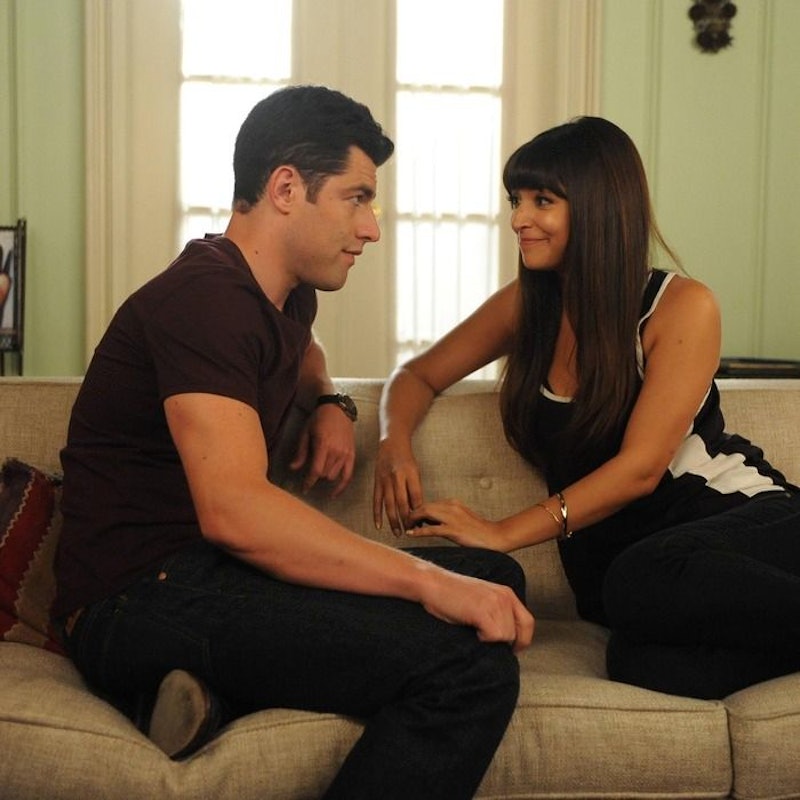 Nick and Jess invite Cece and Schmidt on a double date, which would be a perfectly lovely idea if Schmidt weren't also secretly seeing Elizabeth.

I'm thrilled to report that Ferguson, the cat Winston stole from Daisy last week, continues to reside in the apartment. But despite his cuddly new roommate, Winston's a little miffed that he's been excluded from the double date action (in my experience, most fine dining establishments refuse to serve pets). He decides he'll make a group reservation at Picca, a super-trendy new restaurant, for dinner that night.

Picca is to Winston what Dorsia is to Patrick Bateman. It's impossible to get in. After failing in his attempts to bribe the hostess and call in character as Toni Morrison, he joins a bunch of strangers at the community table and gradually takes over each of their seats. He even orders eight fake entrees to hold his absent friends' places.

Cece senses something's off with an increasingly harried Schmidt, though she mistakenly suspects he's been taking drugs. Finally, Schmidt comes clean to Nick about his deception, but his best friend doesn't take it well—especially when he's expressly forbidden from telling Jess.

To avoid spilling the beans to his girlfriend, Nick dons a face-covering helmet (resulting in a bizarre round of "no-kiss sex"), but she quickly realizes he's keeping a secret and draws it out of him. Furious, Jess gives Schmidt an ultimatum: either he tells Cece the truth, or she will. Meanwhile, Nick anxiously offers a demented jig in the corner: "I made up a dance so everyone will be happy!"

But when Cece arrives, Schmidt quickly ushers her into his car, where he covers for his strange behavior by telling her he's discovered that Nick's cheating on Jess. To Schmidt's dismay, she insists that they confront Nick.

He reluctantly takes her to Picca, where she punches Nick in the balls. Then punches him in the balls again. But then it's her turn to get punched in the (emotional) (lady-)balls. Schmidt is finally honest about infidelity. Cece is devastated. She calls Elizabeth, who nobly chooses angrily pieing Schmidt in the face over punching Nick in the balls.

Heartbroken (and a little deluded), Schmidt is convinced that Nick and Jess are to blame for his—and Cece's and Elizabeth's—pain. He resolves to break them up.

Strange insight into Nick and Jess's sex life of the week: Their roleplay involves a "country lawyer" with an itchy bra.

Strange insight into Nick and Jess's non-sex life of the week: They both believe that horses are from outer space.Image via FOX