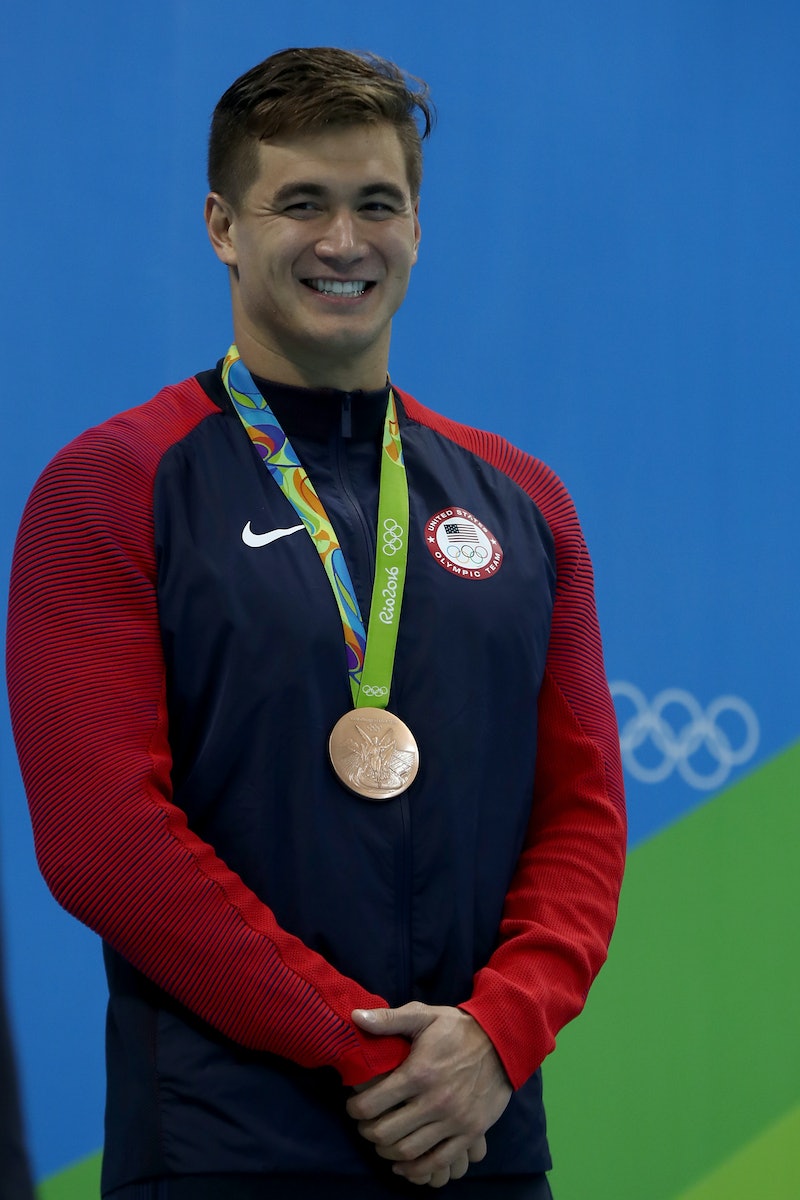 I'm here to tell everyone in the world that we need to pay more attention to Olympic swimmer Nathan Adrian. Not only is Adrian ridiculously talented, he's already charmed his way into infamy at the Rio Olympics. How? Because Adrian has the single-greatest Olympic portrait of all time and it features an adorable puppy. Warning: it's heart-meltingly cute. Clearly, the first line of Adrian's Twitter bio — "I have never taken myself too seriously, and never intend to" — is not simply a statement, it is a career mantra. While Adrian has been repeatedly stealing our hearts both in and out of the pool during his time in Rio, it is his epic Olympic portrait with a Golden Retriever puppy that will cement his place in Olympic history.

Sure, Adrian was not the only Olympic athlete to have their picture taken with an too-precious-for-words puppy. If you click through NBC's Rio Olympics portrait gallery (titled "Paws-itively Cute," because OMG, it really is), you'll see a plethora of Team USA Olympians snuggling up to puppies. Scroll long enough and you'll see Ryan Lochte trying to win the Olympic portrait cuteness contest with two puppies. I'm not falling into your trap, though, Lochte. It's all about Adrian's puppy portrait. With his literal ear-to-ear smile, Adrian and his chosen puppy 100 percent nail the cute factor. Think I'm joking? Try not to squeal with glee at this photo:

Adrian secured one gold and two bronze medals at Rio. His wins, along with an incredibly charming post-race interview, helped launch his Rio visibility in the first week of the games. During his interview with NBC after the 100 meter freestyle, Adrian noted that he "couldn't be upset" with his time or bronze medal. Instead, he chose to celebrate his Olympic achievement. It's precisely this kind of sunny, positive attitude which has shone through in that ridiculously adorable Olympic portrait. I think the only question now is: are there some B-roll photos of Adrian and the puppy and if so, can I get my hands on them?