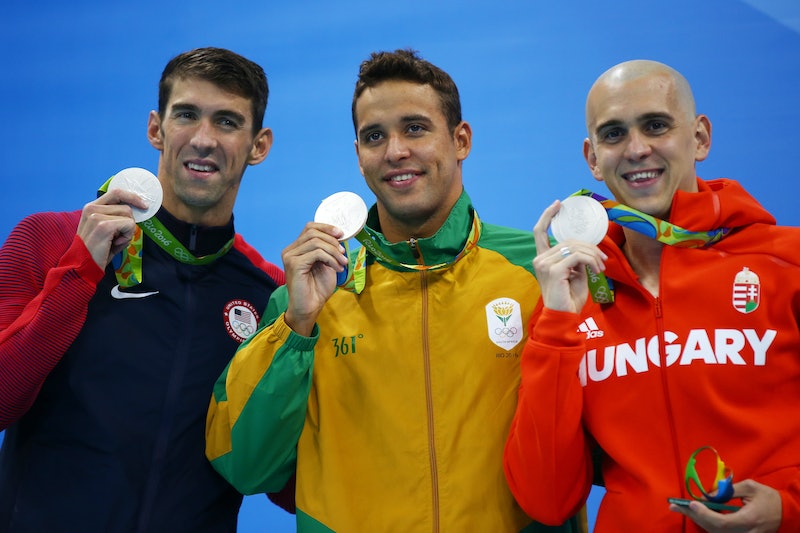 Just when you thought that multiple Olympic medal-winning swimmer Michael Phelps couldn't possibly have much ground left to break within the sport, he goes and manages to get himself involved in another great moment in sporting history. During Friday's 100-meter butterfly, Phelps finished in a three-way tie with Chad Le Clos of South Africa and Laszlo Cseh of Hungary — that's right, a three-way tie. As in, all three of them secured a silver medal, and they all stood on the podium together. It was a truly jaw-dropping moment that, honestly, I can barely get my head around. Like, has a three-way swimming tie ever happened before? And also, how can a three-way tie happen in swimming? I'm so bewildered by every aspect of this story right now.

A three-way tie may seem like some kind of a grand cosmic joke against swimming, but actually it isn't as improbable as you might think. Just over a year ago, in fact, the Swimming World Championships in Russia saw the breaststroke finals ending with three swimmers all earning bronze medals. However, though a three-way tie has happened before in swimming events, it's still the first time that such a result has happened at an Olympic swimming event. Interestingly, though, it has happened previously in other sports during the Olympics.

According to sports historian Bill Mallon, such three-way ties have actually happened 20 times previously at the Olympics, specifically in the high jump, pole vault and gymnastics. However, the last time any sort of a sporting race ended in a three-way tie at the Olympics was 52 years ago. Apparently, this was down to the fact that races were only timed to one-tenth of a second, rather than to one-hundredth, which caused a dead heat between speed-skaters at the 1968 Winter Olympics.

With all of the modern technology accessible to referees and sports leagues these days, it seems even more ludicrous that a three-way tie could happen in swimming in 2016. So how did it possibly happen? Well, the fact is that unlike many other sports, swimming doesn't use technologies like photo finish or instant replay with which to analyze results and determine a winner. Rather, swimming utilizes an electronic timing system, featuring wall mounted touchpads. Once the swimmers reach the wall and touch the pad, the timer is immediately stopped and from there, winners can be easily determined. Usually.

The use of such an electronic system removes the chances of human error — but when a race comes as close as Friday's 100-meter butterfly did, the system becomes trickier to gauge for accuracy. Hence, all three won, as they all clocked the same time.

Although this was kind of an adorable moment, the international federation for aquatics (FINA) may need to consider timing swimmers to one-thousandth of a second now rather than to one-hundredth, if they're looking to avoid such dead-heat achievements in the future.