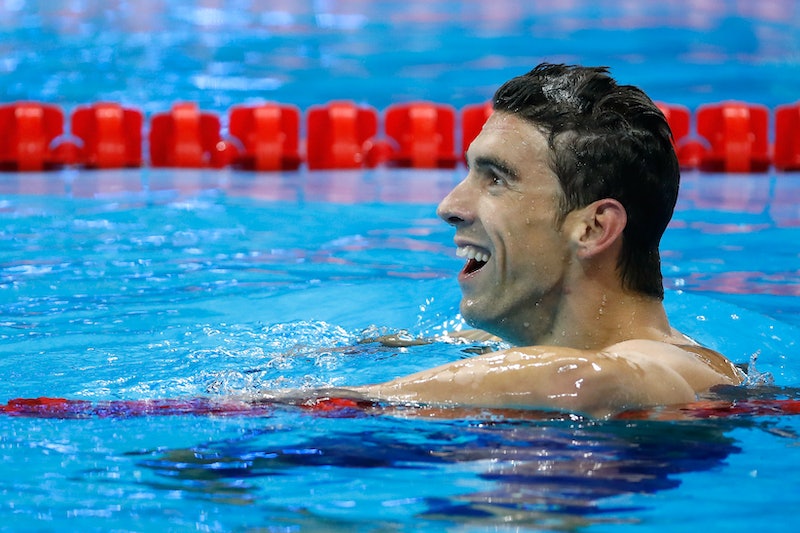 Another Olympic games, another gold medal (or three, so far) for Michael Phelps. Given his track record in London, Beijing, and Athens, success in Rio seems inevitable, right? Not so fast. This time around some are viewing Phelps as an underdog for one reason: his age. That's because the average U.S. Olympic swimmer is 23.3 years old. But should age actually be counted as a factor against Phelps? Sure, he recently became the oldest Olympian to win an individual gold medal in swimming, but that's an accomplishment — not a downside. Being 31 isn't "over the hill" by any means, and just because he came out of retirement to compete in Rio, that doesn't mean he's out of shape. Let's not underestimate Phelps.

"There’s certainly an advantage to that age component," says Ralph Reiff, Executive Director of St. Vincent Sports Performance in Indianapolis. In-between working with athletes on the ground in Rio, he tells Bustle via phone,

"There’s a bit of a benefit in swimming... You’re not putting the same kind of impact on the body as you would if it was a ground-based sport, like running or pole-vaulting... As you do age, you become mentally sharper, more mature, your technique improves. I think that’s where the advantage comes, as Michael has demonstrated."

Still, Reiff notes there's sort of an "asterisk," when it comes to Phelps. He suggests that some people have "a special bonus in their DNA that gives them a little bit of boost. What that is? We don’t know. No one in science knows." This basically means that the way that Phelps is excelling in his 30s may not be the same for athletes across all sports. As Reiff points out, "Age affects everybody’s body... As the body ages, there is certainly a decrease in normal flexibility and mobility of the muscle tissue. There’s also slowing effects, relative to recovery." In other words, it may take the body longer to bounce back after an especially hard workout.

Regardless of what's considered the norm, Phelps hasn't given anybody a reason to doubt his abilities — getting older is working in his favor, if anything. The swimmer has come a long way since his first games in 2000. While most people remember him scoring gold in Athens, a 15-year-old Phelps competed in the 200-meter butterfly in Sydney four years prior (although he did not place). Now, it's his fifth Olympics and surprisingly his times have not changed much. When he first won gold in the 200m men's butterfly in Athens in 2004, Phelps' time was 1:54.04. In Rio 2016, he earned first place in the finals of the same race at 1:53.36. Yes, you read those numbers correctly: In that race, he's faster now than 12 years ago.

And it's not just in the butterfly that his times have improved. Back in '04, his individual 200m medley time (that earned him the gold) was 1:57.14. Phelps will be competing in the Rio finals for this race category on Thursday night, but even his 2016 semi-finals time of 1:55.78 beat that number. As for the other categories — namely the relays — it's a bit tougher to compare those numbers, since it's a team effort. But still, the '04 U.S. team took gold with a 7:07.33 time in the men's 4x200m freestyle relay. This year, they earned gold with a time of 7:00.66. Overall, the team has gotten faster.

"Phelps is still swimming incredibly and still great," Bill Mallon, former president of the International Society of Olympic Historians, tells Bustle during a Skype call. However, it can be harder for athletes to push themselves and stay motivated as they age. For this reason, he believes Phelps isn't necessarily on the same level as in '04 or '08 (which is technically true — in 2008, his 200m butterfly time was 1:52.03 and his 200m individual medley was 1:54.23). Mallon adds,

"Although it doesn’t get physiologically harder to swim as you get to that age, psychologically it’s hard to make yourself get up every morning, go to the pool, and put in eight miles of swimming in the water to stay at the level you were at previously."

If anything, that makes Phelps accomplishments all the more impressive. Plus, thanks to recovery techniques, there are ways to combat the effects of aging. That's where cupping comes into play — aka those bruises everyone has been talking about. "Cupping is an excellent tool to use in the healthcare providers’ toolkit," Reiff says. "What cupping does is actually lifts the skin and lifts the soft tissue and allows for the fluids to move more freely within the muscle tissue. It’s very helpful, particularly in the aging athlete."

Speaking of "aging athletes," Phelps isn't the only one to compete past what others may mistakenly consider his prime. When discussing Olympic history, Mallon shares the story of U.S. swimmer Dara Torres, who first competed in 1984. She took a few games off, but her final was in 2008, when at age 41, she became the oldest swimmer to earn a spot on the Olympics team. She also won three silver medals. Practically paving the way for Phelps, Torres was the first U.S. swimmer to participate in five Olympics.

Athletes like Phelps and Torres can inspire others to not feel limited by the date on their birth certificates. Even if he's not in the exact same shape as a teenager, Phelps has improved with age. As seen in the numbers above, he's as strong a competitor as ever — and knows it. Back in March, he said, "I’m 30 years old and swimming almost faster than I ever have before."

By continuing to succeed, Phelps helps prove people wrong and change their perceptions. "Michael certainly is an extraordinary talent and it’s wonderful that he brings this discussion of high performance in the 'aging' athlete, because like so much in our society today, we’re breaking all kinds of barriers," Reiff explains. "And the mentality of your age relative to performance is a barrier that we’re breaking... It will give a lot of people the inspiration to continue to do what they do well and do it for a long time."

Long story short? Don't let your age hold you back, even if others deem you "too old." Mallon sums up the situation best: "I certainly would not underestimate Michael Phelps. He’s the greatest swimmer of all time, almost no matter when he competes."