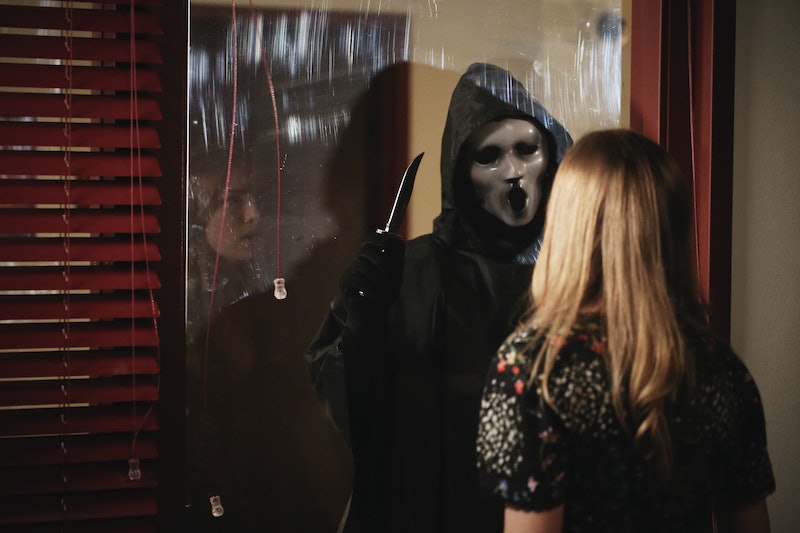 You watched as Emma got her very first phone call from Ghostface. You shut your eyes every time the killer whipped out that signature blade. And you texted your friends "I knew it!!!" when Piper revealed herself to be Scream's Season 1 Big Bad. Now, the Lakewood Six (err, maybe Lakewood Five, now that Jake is a goner) is facing the unmasking of yet another killer in the MTV series' Season 2 "sequel." Though the show has given us so many questions going into the finale (like, could Brandon James be back and/or be behind the Season 2 slaughter? Are Emma's murderous nightmares a clue that she's the real Ghostface?) the biggest question on fans' minds has nothing to do with who the killer is. Instead, it's this huge question looming over the Season 2 finale: will MTV's Scream return for Season 3?

I'm crossing my fingers (and toes) that it will. There's a lot to unpack on this series (so much murder mythology) and there surely more stories to be told in Murderville. Though Scream itself argued about the merits of continuing a film franchise past its sequel, fans did get a Scream 3 and a Scream 4. There's no doubt in my mind that the show could pull another "Oh my God, murder is happening again!" in a third season of the series, and the fans who have created multiple Change.org petitions to save MTV's Scream clearly feel the same way. So what are the odds that will actually happen?

Ratings-wise, it doesn't look good. Prior to the Aug. 16 finale episode, TVSeriesFinale calculated that the average number of viewers that Scream received in its second season was 380,000. It's worth noting that the same site reports that MTV's thriller series Eye Candy was cancelled after its first season with 590,000 average viewers, and that Finding Carter was cancelled with 560,000 viewers in its second season. So is Scream as doomed as Kieran and Emma's relationship? (Because you know one of these two is the killer, right?!) Despite the not-so-stellar ratings, fans shouldn't lose hope.

Though Scream doesn't bring in a ton of viewers, it has a rabid fan base that adores the series and wants it to survive. You can tell by the fact that the show was nominated for Best New Fandom Of The Year at the MTV Fandom Awards, and by checking Twitter anytime an episode airs. Scream receives a ton of social media attention, as do its stars. (Bex Taylor-Klaus, who plays Audrey, is basically worshipped by Scream fans on social media, and for good reason — she's badass onscreen and off.)

People are watching Scream, even if they don't always do so on their TVs, which is what ratings are pulled from. With streaming becoming more and more popular, it's hard to judge exactly how many viewers a show truly brings in. Only MTV can tell us whether Scream will get new life, and since the network hasn't released an official statement, stay strong, Scream fans. We may get good news.