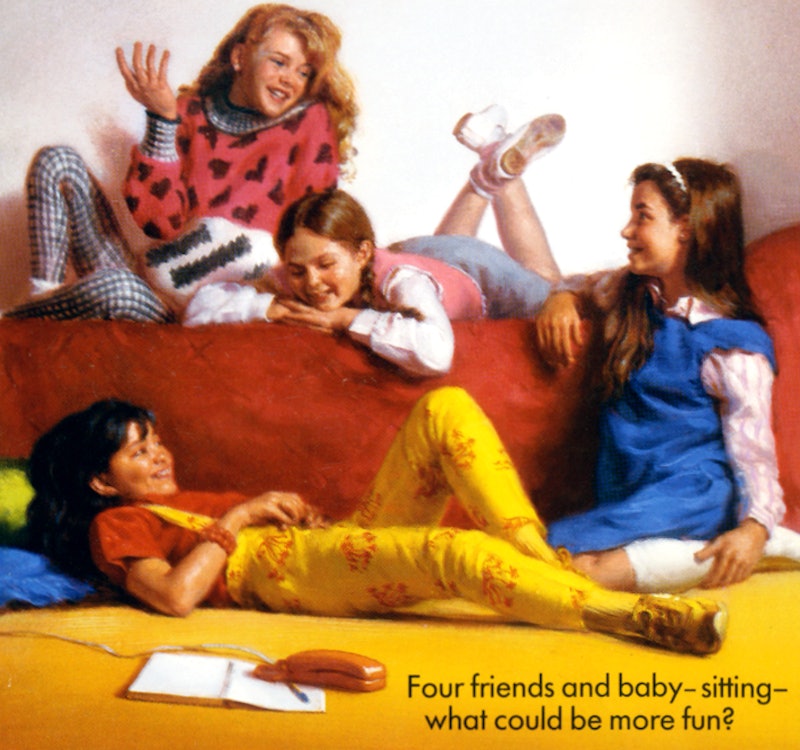 The Great Idea came in 1985. Scholastic editor Jane Feiwel wanted to publish a short series about babysitters. (It was totally her idea, as Kristy would say.) She hired former editor Ann M. Martin to write four books, and just about a year later, in August 1986, The Baby-Sitters Club #1: Kristy's Great Idea was released. Now, in 2016, Scholastic and Martin are celebrating the 30th anniversary of The Baby-Sitters Club, a beloved series that has come to epitomize the coming-of-age experience of preteen girls.

"It was up to me to figure out what The Baby-Sitters Club might be," Ann M. Martin tells Bustle in an interview at Scholastic's New York City headquarters. "I created the four original characters, and wrote one book about each of the four. That was all it was supposed to be."

"I created the four original characters, and wrote one book about each of the four. That was all it was supposed to be."

Those first four books center on the original members of the club: the bold and brash Kristy Thomas, the shy and thoughtful Mary Anne Spier, the artistic and inimitable Claudia Kishi, and the glamorous and sophisticated Stacey McGill. They were the original girl bosses, and readers loved it.

"The success was a big surprise to everybody," Martin says.

"I obviously couldn't write them all," Martin says. "But I let go of them slowly. I was reluctant to let go. I wrote 12 a year, then moved to [writing] one every other month."

In the summer of 1992 — at the height of the Baby-Sitters Club craze — a 19-year-old Scholastic intern named David Levithan was tasked to help edit books in the franchise. "I jumped on board and did not expect that being paid to think like a 13-year-old girl was my calling," Levithan tells Bustle. "But damned if it didn't work. I just stuck with it, and I had so much fun that summer."

"I jumped on board and did not expect that being paid to think like a 13-year-old girl was my calling. But damned if it didn't work."

Later, as a full-time employee, Levithan took over editing responsibilities for the entire franchise. At the time, Scholastic was publishing two BSC books a month.

"It's pretty much humanely impossible to write 24 books a year" Levithan tells Bustle. "So we brought in some really talented writers." He and Martin carefully brainstormed and outlined each and every novel. The ghostwriters wrote from those outlines, and Ann M. Martin would read over the final drafts to make sure each book stayed true to her voice.

"Ann would make it sound like Ann," Levithan says. "Although many of the authors — after writing multiple books — sounded more like Ann than Ann did."

Levithan, now an editorial director at Scholastic, oversaw the Baby-Sitters Club series until the final novel (Super Special 2: Graduation Day) was released in November 2000. The experience of working with Martin on the series, he says, absolutely contributed to his later success as a writer and editor.

"It certainly taught me how to pace myself," he says. "It also taught me a lot about plotting, the rhythm of what people would expect from a novel."

Levithan is now the author or co-author of more than 20 novels, as well as the editor of hundreds of books for children and young adults. Most notably, Levithan was the editor of The Hunger Games series by Suzanne Collins, a dystopian fantasy that, upon first reading, bears little resemblance to The Baby-Sitters Club. But as Levithan points out, the two series have one important thing in common: relatable yet imperfect characters who resonate deeply with young people. These are more than just books; they are all-consuming experiences that transport readers into the worlds the authors created — whether it be Stoneybrook or Panem.

"To readers, these characters were real. What they were facing was real," he says. "The key to [the authors'] success was they made you care about those characters — whether it was Kristy and Mary Anne or Katniss and Peeta."

"The key to their success was they made you care about those characters — whether it was Kristy and Mary Anne or Katniss and Peeta."

But to say readers simply cared about the characters of The Baby-Sitters Club is an understatement so egregious it nearly feels untrue. Readers were absolutely, positively crazy about Kristy, Mary Anne, Claudia, Stacey and the characters who followed: Dawn, Mallory, Jessi, Abby, Logan, Shannon, and more. Readers never owned just one The Baby-Sitters Club novel; they owned 40 or 50 or 100 or 200 of those Easter Egg-colored paperbacks. Many of those die-hard fans still treasure those Baby-Sitters Club novels. Some of them are parents now, and some of them are passing down their well-worn and well-loved copies to their children.

And perhaps that's what's most surprising about the success of The Baby-Sitters Club series. It's not that the original readers still love the books; it's that new readers love the books. And many of these readers were introduced to BSC not through the original books, but through a series of graphic novels based on the series.

In 2006, Scholastic re-released Kristy's Great Idea as a graphic novel, written and illustrated by Raina Telgemeier with text edited by Levithan. Scholastic has since released four of the original series as graphic novels (three are currently New York Times bestsellers), and they plan to release more in the coming years. "It's fun to revisit them," says Levithan. "Of course, I am just counting down the days until we get to Boy-Crazy Stacey. If there was ever a graphic novel I wanted to see, that's it."

All jokes aside, Ann M. Martin and David Levithan are both blown away by the enduring love for these characters. The stories have become universal, timeless tales of adolescence and friendship. "The core things that kids cared about then, they still care about today: friends, family, school, pets." Martin says.

Neither Martin nor Levithan will speculate on where the girls would be today ("If you want a really effective party trick," Levithan jokes. "Walk into a group of 30-year-old women and ask, 'Do you think Mary Anne and Logan are still together?'"). Part of the magic, they say, is that readers are free to imagine their own ending.

"If you want a really effective party trick, walk into a group of 30-year-old women, and ask, 'Do you think Mary Anne and Logan are still together?'"

For Martin, the girls are the same as they always were. "People really do want to know what they've grown up to be, what their lives are like now." Martin says. "I still think of them where the last book left off: as 13-years-old and heading into high school, finally."

Readers grow older and grow up. Eventually, they settle down and have children of their own. And those children will grow up with the girls of Stoneybrook, too. For 30 years, The Baby-Sitters Club have been the caretakers of our youth — guiding readers through those awkward adolescent years and reminding them of the most important things in life: love, community, family, friendship.

Here's to another 30 years.