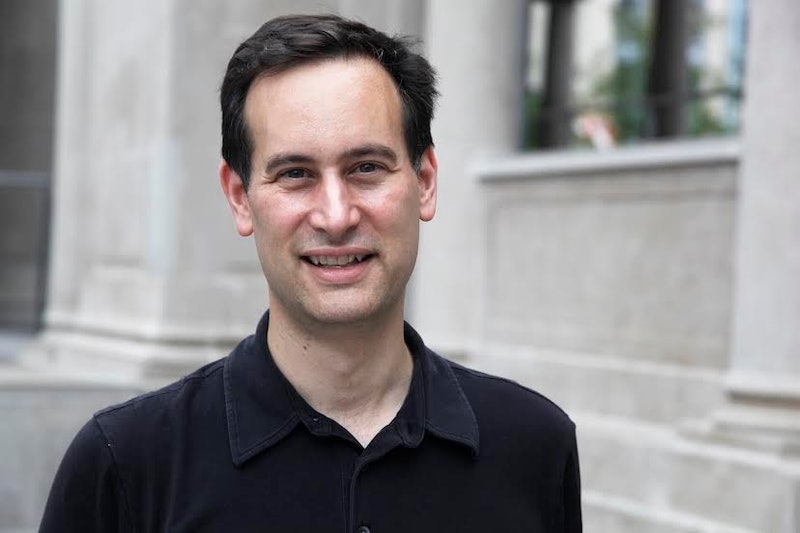 It should come as no surprise that readers are clamoring for David Levithan's Will Grayson, Will Grayson spin-off Hold Me Closer: The Tiny Cooper Story . Tiny Cooper is a fan favorite character from Levithan's novel collaboration with the reigning king of young adult literature, John Green. And Hold Me Closer is promising to be a unique novel — it's not so much a straightforward as the script for Cooper's biographical musical that he was writing during Will Grayson, Will Grayson, complete with song lyrics and stage notes from the (shall we say) long-winded Cooper.

But Tiny Cooper is also one of Levithan's favorite characters, as well, though he began as a character in one of Green's chapters of the novel. Will Grayson, Will Grayson, released in 2010, is the story of two teenage boys with the same name, who intersect as they're both going through their own life troubles, and they're lives start to intertwine. Cooper is one of Will Grayson's (capitalized) best friends, who eventually forms a relationship with will grayson (lowercase). He's described in the novel, by the writers:

So who better to interview the (fictional) protagonist of the new Will Grayson, Will Grayson all-singing, all-dancing musical spin-off Hold Me Closer: The Tiny Cooper Story than his co-creator himself, Levithan? Here it is, exclusively for you!

DAVID LEVITHAN: So what is it like, Tiny, to see your life story in this form?

DL: Was it weird to turn your life into a musical?

TC: I won’t say it was easy. There are too many haters out there to make it that easy. And there are always the inner haters, too, saying that your story is all blah-blah-blah and not enough rah-rah-rah. But when you start to see things in terms of songs — well, it makes life seem more tuneful, I guess. Like, if you can sing about it, it can’t be that bad, because you’ve found the music somewhere inside.

DL: Did you worry about putting too much of yourself out there?

TC: There’s a lot of me to go around.

DL: But isn’t it painful to revisit certain parts of your past?

TC: At first I was afraid — I was petrified. But I got over that. Because, yeah, I made a few mistakes. But I wouldn’t be who I am right now if I hadn’t made those mistakes. So I don’t feel too bad about them.

DL: Did you feel you had to hold anything back when creating your musical?

TC: I wanted to make sure that while I shared all my personal business, I wasn’t sharing other people’s.

DL: You were dating him while you were writing this, weren’t you?

TC: I was. But I’m not sure I want to talk about that.

DL: It made you think a lot about love, didn’t it?

TC: It did. I think when we’re in relationships, there are always these recurring themes. And we get so used to them that we don’t even notice them. Or we take it for granted that the same things will always happen. Will made me realize that you can actually step back and see your own patterns. And then you have to decide if they’re the patterns you really want to have.

DL: So tell me more about the structure of this musical.

TC: Well, the first act is really about me finding out who I am. I mean, the facts were clear from the beginning — I’m a big gay superstar, and there’s no use denying that. But, knowing who you are from the start doesn’t guarantee you know what it means. Or even how it’s going to feel. Then the second act is really about me trying to navigate love. I had some trouble with relationships—

DL: Eighteen ex-boyfriends, to be exact.

DL: You are. They all appear in the second act.

TC: Some musicals have singing gang members. Others have French revolutionaries. I have ex-boyfriends to work with. Let’s just say there weren’t many empty chairs at my tables.

DL: What did writing about these exes teach you?

TC: To be pickier!

DL: Fair enough. What has the reaction been like so far?

TC: I think it was strange for some of my friends to see themselves onstage. My best friend, Will, especially. He was weird about it from the beginning. I guess for some people it takes some adjustment to see themselves as singing, dancing characters under the stage lights. Like, that’s not how Will imagines himself. He can barely hum in public.

DL: And did he approve of the final results?

TC: Oh, yeah. No one can resist my secret weapon.

DL: I read somewhere that the opening night was a huge success. How did that you make you feel?

DL: And did anything unexpected come of it?

TC: Yes. His name is Chance.

More like this
16 Novels That Paint A Realistic Portrait Of Abortion
By K.W. Colyard
Christina Aguilera Had A Mini "Lady Marmalade" Reunion With Mya At LA Pride
By Jake Viswanath
Ottessa Moshfegh Is Happy To Be Your “It” Girl
By Arya Roshanian
10 Must-Read New Books Out This Week
By K.W. Colyard
Get Even More From Bustle — Sign Up For The Newsletter