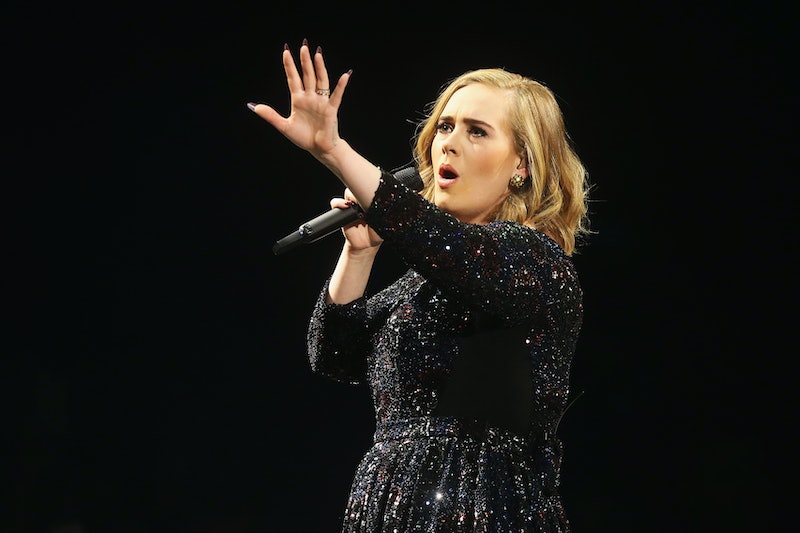 Just a few, short, sweet days ago, rumors were running rampant about the possibility of Adele performing at Super Bowl 51, which meant that I turned to the black market to see which organ I could auction off for the most amount of money in order to get the funds to go (I kid, I kid). As it turns out, the rumor was true, at least partially. But, it's not the part I was hoping for (though, I am enthused to not have to undergo any major surgeries). You see, according to Variety, Adele was, in fact, asked to sing at the Super Bowl. Great news, right? Wrong. Here's the catch — she's not into it. Adele is not going to perform at the Super Bowl, she told fans during a recent concert.

Before you get your, as Drake would say, "Twitter fingers," in a tizzy and tweet Adele your ire over the audacity of that decision, know that she was super respectful and honest about her reason for not performing Despite how disappointed fans may be, we have to accept that this one thing, performing at the Super Bowl, is just not her speed. But don't take my word for it. Listen to the lady with the golden pipes. Especially since she explained at her concert on Saturday night why she doesn't think she's Super Bowl half-time show material in the most real, no nonsense "Adele" way, that it almost makes up for her not performing. Almost.

Per Variety, Adele said to the audience,

First of all, I’m not doing the Super Bowl. I mean, come on, that show is not about music. And I don’t really— I can’t dance or anything like that. They were very kind, they did ask me, but I said no. I'm sorry, but maybe next time in my next life...

See? Adele is the freakin' best, even when she's ruining my Super Bowl half-time dreams. And, I mean, she does have a point. Typically, the half-time performers dance their hearts out, up and down the stage — that is, when they're not riding on the back of giant animatronic jungle animals. Adele is a performer, yes, but sans the frills. She sings her heart out, but choreographed dance routines for a crowd of thousands truly isn't her thing.

I think, perhaps, that the only thing Adele doesn't get is that we'd all sacrifice the half-time explosions, confetti, and acrobatics just to hear her sing live in any capacity. Especially us poor fools who were shut out of the ticket queue for her concert after waiting on it for the better part of two hours (I swear I'm not still bitter about it). But, it is what it is. Maybe Adele's got another singing gig up her sleeve that'll be everything the half-time show couldn't be.