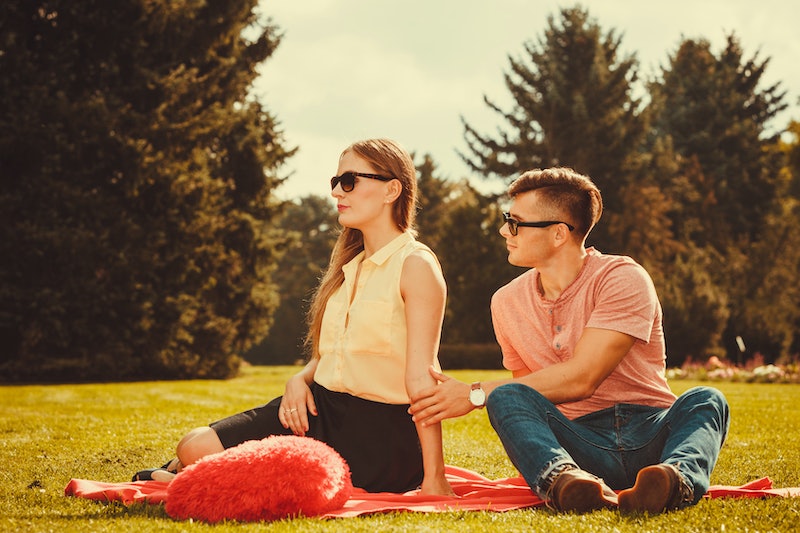 When you're in a relationship and you want to keep that relationship going, the seemingly rational course of action is to become closer with your partner, or at least maintain your level of intimacy. Yet there are so many ways we push our partners away without realizing it. Some behaviors become so habitual we don't even know we're doing them for that reason.

"Patterns in your life, particularly in your romantic connections, are the best way to uncover what you might be unconsciously thinking about yourself," says emotional health expert and licensed psychotherapist Katherine Schafler, who runs a high-demand private practice and is the on-site therapist for Google NY. So, if you've found yourself pushing a romantic partner or potential partner away, this probably reflects a belief you subconsciously hold about them, yourself, or relationships.

"You overcome the enactment of negative thoughts, fears, and beliefs by first making the unconscious conscious, and then deciding what you actually believe to be true about yourself," says Schafler. So, understanding how you might be pushing people away and why you're doing it is the first step toward developing closer relationships.

Here are some of the most common ways we push our partners away, what they mean, and what you can do about them.

1. Playing Hard To Get

People, especially women, are often advised to "play hard to get" in order to keep their love interests on their toes. This is not only rather sexist but can also become a defense mechanism: If we don't seem that interested, it won't seem like a big deal if the other person's not interested. The problem with this approach, of course, is that if they are interested, they'll have no way of knowing their interest is reciprocated," and a relationship that has potential may not develop because everyone's so damn hard to get.

We may pick fights with our partners because we subconsciously believe the relationship will end and want to at least be the ones to end it. Some people will do this just as things get really good. If that sounds like you, says Schafler, "you might be carrying the unconscious belief that love that feels good is fleeting and will end. You pick the fight because we're wired to try to control the situation, so if the good feeling is going to end anyway, you're at least going to get to control when it ends."

Some may also do this right before they part ways with a partner temporarily in order to make the goodbye hurt less. However it happens, it usually only serves to make things end on a bad note — or end before you wanted them to.

We tend to believe that if something bad has happened to us in this past, it'll happen again, says Schafler. For example, if you've been cheated on, you might suspect your partner of cheating. Then, to protect yourself from experiencing that again, you may push them away by accusing them of cheating, snooping on them, or rejecting kind gestures from them because you fear they're overcompensating. Or, you may push them away in other ways so that they don't even have the chance to cheat.

Even if we legitimately don't have a lot of time for our partners, we're sometimes afraid to make time because we're scared of getting too close to someone or losing ourselves in them. If you like to think of yourself as a career-oriented person, for example, you may neglect your partner in favor of work to preserve that identity, even when it's not actually necessary to maintain your job. We may do this because we're scared that if we invest too much time or energy in our partners and they let us down, we'll have more to lose.

There are times in our lives when we'd rather be single than jump into a relationship, and that's fine. But if you find yourself consistently unwilling to commit to anyone for no clear reason, you may be subconsciously trying to push people away. One sign of commitment-phobia is that your reasons for not wanting to stay in a relationship or enter into one have more to do with relationships in general than the person you're with.

Don't worry — if you've been doing any of these things (and who hasn't at some point?), there's hope! "The good news is that your belief system works both ways," says Schafler. "So if you believe you're deserving of good, real, whole love, then you will seek out people who provide that for you, you will accept their expressions of that good, whole love, and you will feel relaxed when things are good because you know a simple truth about life: real love feels good."