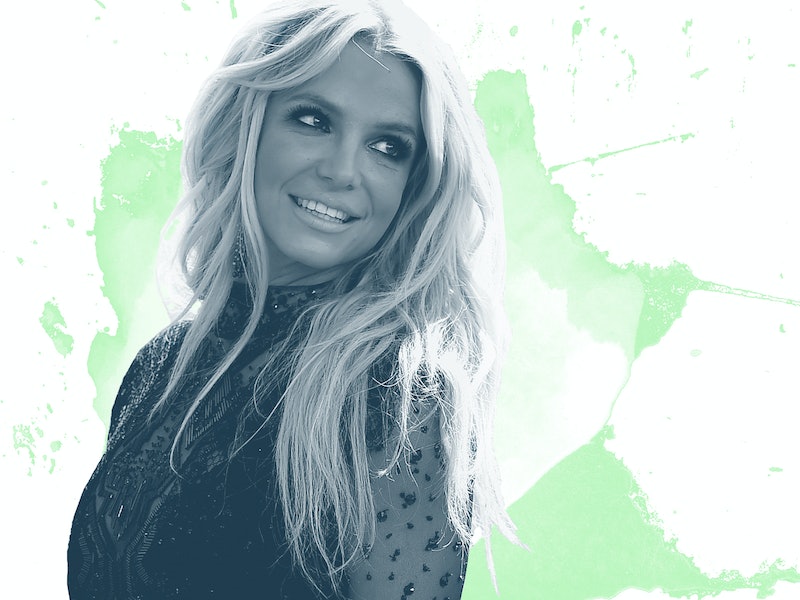 The phrase "Britney's back" has echoed around the internet every time Britney Spears has had a big award show performance, released a new album, or danced on beat to her own music for the past 10 years. It started circulating around the time of Blackout in 2007 and carried on through Circus, Femme Fatale, Britney Jean, and now, to her soon-to-be released album, Glory. Spears is coming up on her ninth album, so at this point, more than half of her albums have been surrounded by talk of a comeback. At what point is she just... back? That raises the question, though, of what "back" even means to Britney fans. It seems like we won't be satisfied until the original Britney Spears returns — the Britney of "Oops!... I Did It Again," who dated Justin Timberlake and wore uncomfortable looking red catsuits. But why? We've all moved on, yet it's so hard to let her do the same.

There are so many versions of Spears that people want to see return. For me, I crave the over-the-top choreographed dance routines of her early days. Spears blew out her knee in 2004 and her dancing hasn't been the same since. (This is why spotting videos like these from her Vegas residency that show her dancing like she used to back in the day are so exciting.) For the tabloid media, it's all about wanting Spears to recapture the exact dimensions of her once-teenage body, and shaming her when she doesn't. For years, Spears' body has been dissected by tabloids — is she gaining weight, losing weight, how firm are her abs? To this day there are headlines about Spears' "bikini body" everywhere. For lots of fans, it's about her music. While Spears used to put our pop hit after pop hit, now she isn't quite able to become a fixture on pop radio the way she once was. Even when she has a single out, I can go in any store and hear Rihanna or Selena Gomez or Taylor Swift a million times and never hear Spears once.

If you ask me, a big part of the reason we all want the original version of Spears back has a lot to do with all that we've been through together as her fans. Spears released In the Zone in 2003 and soon afterward, things took a turn for the worse in her personal life. There was her ill fated marriage to Kevin Federline, which was documented on their bizarre reality show, Britney & Kevin: Chaotic. (These days, everyone knows that someone at the top of their game doesn't turn to reality TV, but back in 2005 it was like Spears was testing things out as our guinea pig.) The couple went on to have two children together and in 2006, she filed for divorce.

Then, her behavior became increasingly more erratic. She was photographed shaving her head by paparazzi and soon after she beat the window of a paparazzo's car with an umbrella. In October 2007, she lost custody of her sons. In early 2008, she was taken to a psychiatric hospital, and not long after, a conservatorship was put into place by her family. (According to the New York Times, under the agreement, "Ms. Spears cannot make key decisions, personal or financial, without the approval of her conservators: her father, Jamie Spears, and a lawyer, Andrew M. Wallet.")

As fans, we watched this all happen. And after seeing all that Spears went through, it's hard not to go ahead and assume that she would want to go back to the way she was before all hell broke loose, too. Of course, it's possible to go through tough times and come out a better and stronger person, plenty of people do it, but the natural inclination is to wish things were back to the way they were before your problems even started. In wanting old Britney back, we are projecting that idea on to her. We want to preserve the version of her that was a young, innocent, seemingly happy starlet on the brink of success, before the perils of fame put her through the ringer.

Pamela Rutledge, the director of the Media Psychology Research Center, tells Bustle that she suspects fans and followers might actually have wanted to see Spears fail — only to want to watch her rise back up again. "What you're seeing with people who are extraordinarily successful is that at a certain point, people — they've been through the rise and there you are and they actually want to see you fall," she says over the phone. "In other words, they're starting to look for reasons you're not perfect, where you're human, you're not above the trials and tribulations we all face."

Our insistence that Spears return to her "original" form likely has a lot to do with the timing of her trajectory. Spears' career and the ups and downs in her personal life aligned with the rise of celeb news coverage on the internet. When Spears came on the scene in 1999, there were tabloids, of course, but the media landscape was tame compared to the nonstop celeb coverage that came with the rise of gossip blogs. Perez Hilton's blog started in 2004, which was the same year Spears married Kevin Federline. TMZ launched in 2005, which was the year Britney and Kevin: Chaotic premiered. In 2007, Spears was photographed partying with Paris Hilton and other members of young Hollywood, lost custody of her children to Federline, and checked herself into two short stays for substance abuse treatment, according to the New York Times. February of that year was when she shaved her head; October was her infamous VMAs performance of "Gimme More." In December 2007, Spears turned 26.

She went through a lot in a short amount of time. And because of the increase in intensity celebrity news coverage, we went from innocent Britney, who seemed even more innocent because the only news we got about her was when she did magazine or television interviews, to 2007 Britney, who, certainly, had gone through a lot of changes in her life, but which were exacerbated by the fact that the paparazzi, and reality TV cameras, had caught all of those changes on tape.

In fact, one of Spears' most notable interviews touches on exactly how little we knew about her when she was getting started. In her 1999 Rolling Stone cover story — you know, the one that featured her posing in a bra in her childhood bedroom — writer Steven Daly said,

But for all the fan-mag prose that greeted Spears' explosive marketplace entry, we know precious little about her beyond an image that hints at several stereotypes. Is Spears bubblegum jailbait, jaded crossover diva or malleable Stepford teen? Who knows? Whether by design or not, the queen of America's new Teen Age is a distinctly modern anomaly: the anonymous superstar.

But, then, suddenly — or it seems sudden, looking back — we knew all too much about her. We knew everything about her personal life, from who she was hanging out with to the state of her mental health. I don't think that fans consciously want to get back to a place where we know nothing about Spears, but rather that we didn't realize how little we were basing our judgements of her on to begin with. We have an idyllic, but uninformed, view of her early years of stardom, and we miss that perceived innocence.

"The ability to observe [Spears' life] first hand, to watch it on multiple media, to have that immersive experience in it rather than a single curated avenue coming through a magazine... that allows you to be more invested in it," Rutledge says. "It amplifies the emotion."

It's not a stretch to say that people get attached to the way their idols were in their original form, especially with musicians. "I like their old stuff better" is a jokey cliché at this point when it comes to how people talk about bands, but really, I'm sure any music fan can think of several groups where they legitimately do like their old stuff better. And this idea works with everything from celeb crushes to actors who no longer take the type of roles we want them to. Celebrities are so incredibly easy to project your own ideas on to that it's really no surprise that we would want old Britney back.

Rutledge adds, "Aside from watching her rise and fall and all that stuff, there’s this other story thats about the audience, not about Britney Spears. It's about them wanting to capture a moment in time when something was very extraordinary or special for them for some reason." For the "young demographic" that made up Spears' fan base back in the early aughts, Rutledge says of that time in their lives, "That's a very powerful informative period. And so now that means 15 years later that period's starting to look pretty good ... It's kind of like you look back on college and you wonder why you were so stressed."

We say we want the old Spears to return because we want her to be "back" to her old self or feel "better," but maybe she's just fine, only changed, older, with more experience under her belt, much like the rest of us. Of course, there's her ongoing conservatorship, which raises questions about what Spears' mental state is like today — and her sometimes questionable behavior, even something as small as posting a Googled image of Mexican corn on her Instagram as if it was a dish she cooked herself fuels the desire to know what's really going on. But since it doesn't seem like specific answers about her mental health are going to ever be shared publicly — and that's totally understandable, fans definitely don't have a right or even deserve to know this information — it's best we take things at face value, and Spears herself has said she's doing just fine. She told People in 2015,

"I'm in a real good place in my life. I have a great show, and I'm able to be off every six weeks and I get to indulge in my kids. I get summers off, so we can do fun things like have barbecues. The boys are in such a good stage in their lives. They're able to think for themselves and are becoming little people. It's fascinating.... I'm the happiest I've ever been. My priorities are straight: making family No. 1 and being consistent with that and having God in my life."

So where do we go from here? Will we ever allow for Spears to just be "back" and not in a constant state of making a "comeback"? The Britney we have now, should be accepted, right? She has a successful Las Vegas show, she has a great relationship with her sons, she's said herself that she's happy. I'm not doubting that fans aren't still enamored with Spears or that they will obsess over Glory when it's released, but I do think that it's about time that the narrative surrounding her change. Whether we wish her knee would be magically healed or not, Spears is who she is now, in 2016. She's never going to be how she was in 1999, and that's OK — it's better than OK, it's great. Because she is a 34-year-old woman and she should be in a different place in her life than she was then. Britney's been back, it's just time now that we all accept it.