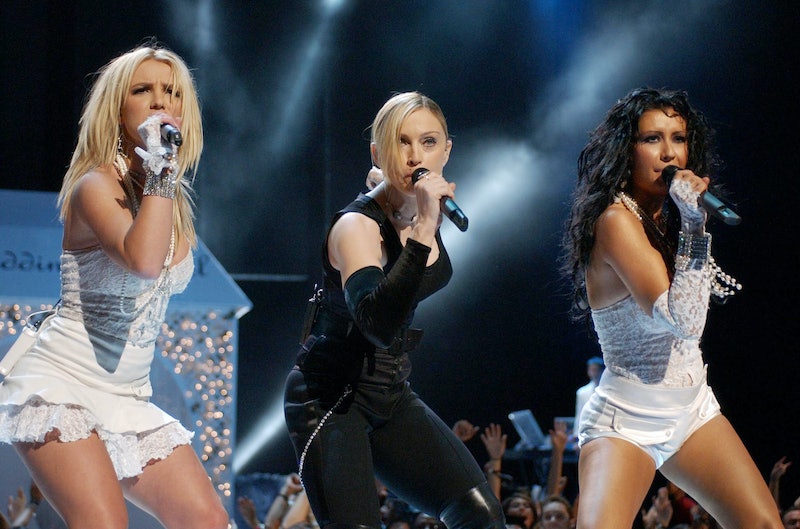 As a suburban kid who grew up on a diet of teen magazines and endless episodes of Pop-Up Video on Vh1, pop culture has been so deeply embedded in my brain from such a young age that it was only natural that it became my profession as well (*hair flip emoji*). And in watching the pop culture landscape grow and evolve from the late '90s/early 2000s into what it is today, one of the most badass things to witness is the evolution of how female pop stars interact with one another and how their relationships are presented in the media. While the 2000s were blaring with neon-colored "POP STAR DIVA FEUD" headlines left and right, today's female pop stars are all about supporting one another and building each other up. Was it that the '90s and '00s pop stars were just more hateful, or did the media create these feuds? And how does society play a role?

All three of these factors come into play here. That's not to say that the Britney Spears and Christina Aguileras of the '00s were constantly trading barbs and tearing each other down, but each has said some shady things about the other, and Us Weekly has the receipts. That being said, it's important to look at the context here: Were these quotes unprompted, or did the media purposely ask each pop star about the other, knowing it could produce a pull-quote so enticing it would not only make headlines but also further the feud? It could easily be argued that the Britney Spears/Christina Aguilera rivalry was one created by the media, a gross kind of "cat fight" between two sexy, young pop stars who were one-time friends and were now going up against each other in the world of pop.

Interestingly enough, this same kind of feud mentality did not exist between the male pop stars at the time. Yes, *NSYNC and Backstreet Boys were often pitted against each other as rival boy bands, but that emphasis was never on the groups themselves. Even as a 10-year-old, I was well-aware that that any boy band feuding was left for the (mostly female) fans to duke out amongst themselves. I mean, everyone on the playground knew you were either BSB or *NSYNC, which could lead to an icy exclusion from a friend group if you didn't choose wisely.

It's also important to keep in mind the kind of media that existed in the early 2000s: It was mostly celebrity weeklies, and ones that made their money off of sexist headlines screaming about celebrities with cellulite. The early celeb blogs quickly followed suit: 2005-era Perez Hilton was notably snarkier and more provocative than he is today, drawing crude doodles of semen on celebrities' faces in Microsoft Paint — his hallmark at the time (this would not go down today). Does any of this mean that there wasn't some legit tension between Spears and Aguilera? No, and there probably really was. But when put in context with the media landscape during this time, it most likely wasn't to the extent that the press made it out to be.

And maybe we should be giving the pop stars credit where credit is due. Since their supposed feud was guaranteed click-bait in a time where that phrase didn't even exist, two seasoned stars — who were most likely media-trained within an inch of their life — may have known exactly how this whole thing worked. A snippy quote here, a shady quote there: publicity for the both of them, and they can kick back, laugh, and watch the whole thing take on a life of its own. (For what it's worth, both Spears and Aguilera have been vocal about supporting one another in recent years.)

Today, we're dealing with an arguably more #woke generation of pop culture, one that includes up-to-the-second information on social media, a wide variety of entertainment news outlets (including many that are feminist or celeb-friendly and positive), and stars who are taking strong stands about female empowerment, not only refusing to get sucked into the age-old tabloid story of a "girl fight," but calling out anyone who tries to get them to engage. Society as a whole is notably more progressive and accepting, with a keen sense of awareness about inequality — particularly when it comes to gender.

This all sets the stage for celebs like Ariana Grande, who has repeatedly praised fellow female pop stars like Selena Gomez and Demi Lovato, even using her platform in a recent Billboard interview to admonish those who undermine female stars' successes by defining them in terms of their relationship with a man. (Though Grande never mentioned names, it was perceived that she was talking about Gomez and her relationship with Justin Bieber.) It sets the stage for Taylor Swift and her #GirlSquad, and gives her room to not only choose not to engage with an instigating question about Miley Cyrus, but actually defend Cyrus — as well as empower all female celebs out there. As she said on the Canadian show Tout Le Monde en Parle :

One thing I do believe as a feminist is that in order for us to have gender equality we have to stop making it a girl fight, and we have to stop being so interested in seeing girls try to tear each other down. It has to be more about cheering each other on, as women and that's just kind of how I feel about it.

It's an idea that both Selena Gomez and Katy Perry put into practice. In May 2016, after a series of grainy-ass photos made the public believe that Orlando Bloom was cheating on Perry with Gomez, the pop stars shut down any notion of a feud and instead supported one another. It was brilliant:

Still, I would be remiss not to mention that it's not as if female pop star feuds have been completely eradicated from the celebrity landscape today. One quick Twitter search of "#MileyWhatsGood" or "#IDontKnowHer" will tell you differently. Even among two women who are known for lifting other women up (Taylor Swift and Katy Perry), there may be an actual "feud." But these things take time. As our culture continues to evolve, so do the people in it, and so does the media. Fights between women pop stars may not be entirely wiped out from our pop culture lexicon just yet — but we're on our way there. And that awareness in itself is an extremely important step.