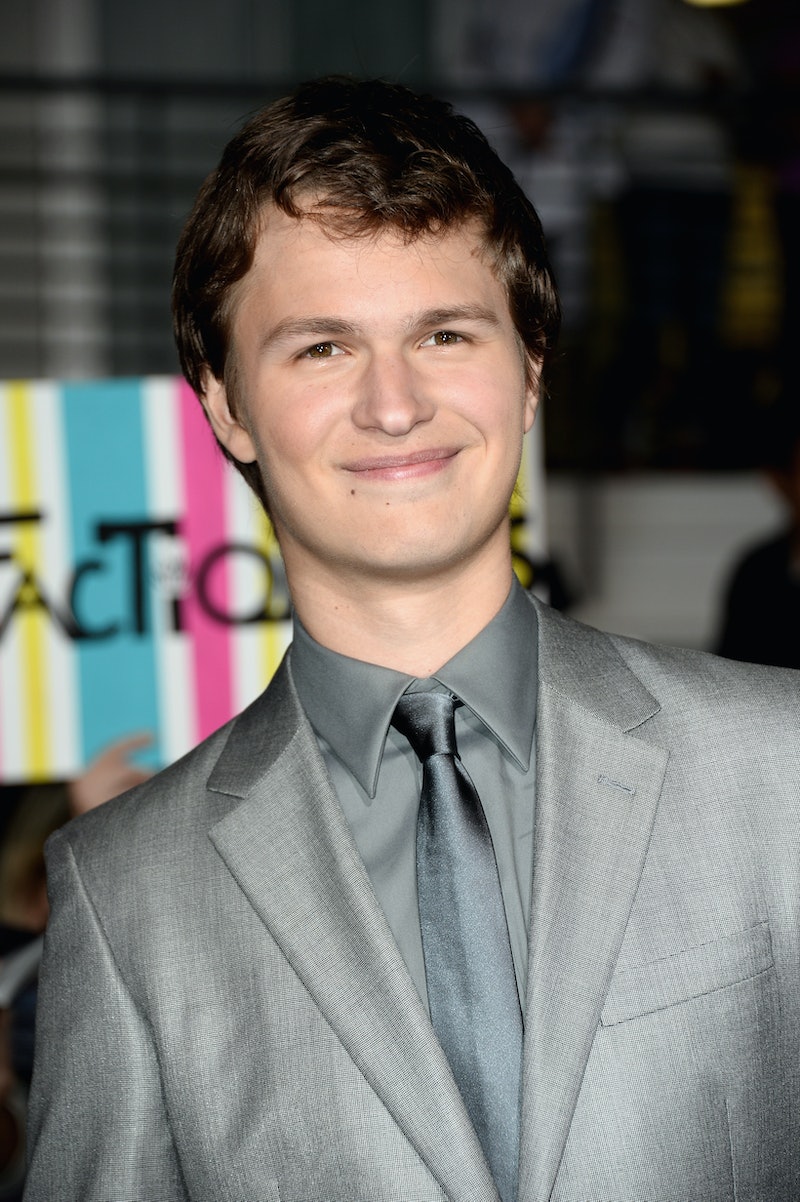 I've watched it at least a dozen times, and every single time, without fail, The Fault in Our Stars trailer gets me teary-eyed. It's a trailer that's nearly as brilliantly crafted as the John Green book on which its based. The big screen adaptation, out June 6, follows Hazel (Shailene Woodley) and Gus, two teenagers who find friendship and love in a cancer support group. Hot off another YA franchise, Divergent, newcomer Ansel Elgort plays sarcastic and optimistic Gus. The actor spoke to Bustle about his breakout year, his second film with Shailene Woodley and his surprising hidden talent.

"Everything's changed career wise," the 20-year-old actor said of his emergence in Hollywood. "But my life has stayed pretty much the same. I've made a little money so I got to move out of my house, I don't live with my parents anymore, that's nice."

"If I didn't like [Divergent], I'd probably lie to you and tell you that I did. But I did like it a lot. The thing with these kinds of films is, sometimes — I won't name any examples — but movie studios try to get away with using the fact that it's a great successful story, so they'll make a shitty movie and know people will still go. But they did not do that. This is a really good, quality movie. All of the actors were great, there wasn't a false performance to be seen," Elgort said.

Jumping from one successful flick to the next, Elgort's third film is The Fault in Our Stars. "...And a movie with Jason Reitman, the director from Juno and Up in the Air," Elgort is quick to remind me. He's referrencing Men, Women & Children, a film thats ambiguous IMDB page simply says: "A look at the sexual frustrations that young teenagers and adults face in today's world."

Elgort is the rare exception in Hollywood, having his first, second, and third casted roles be expected bonafide hits. So how does a boy from New York adapt to being thrust into the Hollywood limelight?

"Yesterday I was playing basketball and I did not think I was going to get recognized, and of course there were like 20 girls who were screaming. It was like having your own cheerleading squad. Every time I made a shot they were all freaking out," the actor said. "That was nice, but at the same time, that's a little bit of the negative because you're just trying to play basketball and people recognize you. I've said this before, if I was just playing basketball a year ago before I had any of these movies, no one would care. So it's not because of me, it's these stories that people are obsessed with. These stories that I'm privileged enough to have been cast in, and I get to bring these characters to life. People are excited about it."

The Fault in Our Stars marks the second film Elgort and Shailene Woodley have co-starred in together. When I suggested the pair must be good friends at this point, Elgort laughed: "Or we must hate each other, one or the other... No, definitely no struggle," he clarified.

In Divergent, the pair play siblings, but in The Fault in Our Stars, their sibling relationship is transformed into a romantic one, and for those who have read the book, know just how romantic the characters get.

"We were very comfortable with one another going into Fault in Our Stars," Elgort said. "Immediately we are totally comfortable which is nice, because sometimes you do love scenes with people and you have to kiss them and you have to be romantic and it could be very awkward. But because we are such good friends at this point, we totally understand one another. She's one of the best actors right now around, the fact that they put me with her twice is a huge compliment to me. It's given me confidence and made me feel great. Hopefully people love that movie too."

And because he's seen Woodley both with flowing blonde locks in Divergent, and a bluntly cut brunette 'do in FIOS, I had to ask: Preference?

"It depends. I don't think her hair as Hazel is that flattering. But it's very realistic, and for that reason it is beautiful. It's not Hollywood, and that's what I love about that hair. It's like she's a real girl from the Midwest. In real life, the way she wears it now, she kinda slicks it back in this really cool way, which is dope. It looks cool and sexy and different. Her hair looks beautiful as Beatrice too."

And while Elgort has clearly made it into a successful career, acting isn't his only interest. He rock climbs and plays basketball ("I don't like lifting weights") and DJs.

"I produce house music, I compose. I DJ. Sort of like Calvin Harris, Avicci, that kind of stuff. But now my stuff is getting a bit darker, more clubby, and that's my original sound," he said. "Mat Zo is my favorite producer, Tom Staar & Kryder. Zedd is an inspiration for a lot of people, because he's taken dance music and made it mainstream. In a great way, it doesn't sound like cheese."

Watch the trailer for The Fault in Our Stars below. And then watch it again.