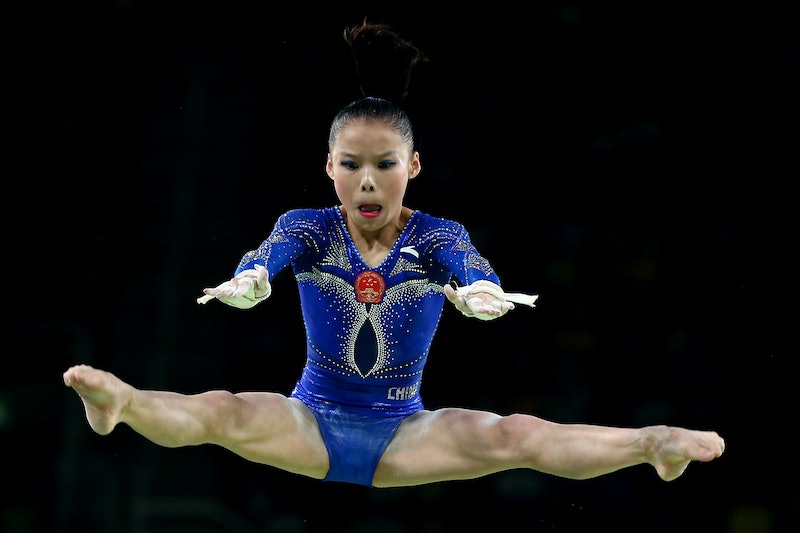 Shang Chunsong is undeniably an incredible athlete. Therefore, the continual criticism that the Chinese gymnast has faced during the 2016 Olympics is disheartening. Ever since her first appearance in Rio, rumors have circulated about Shang's age, height, and weight, placing the focus on her body and not on her incredible skills as a gymnast.

During the first week of the Olympics, onlookers questioned whether Shang is old enough to be in the Olympics. (Yes. She is 20 years old.) They have also continually commented on her small body, wondering if she has an eating disorder, which is terrible speculation. Here's the thing: Shang is an athlete, so the focus should be on her athleticism, and that's it.

Women athletes' bodies are continually scrutinized, which is not only not OK (an woman's body is her business), but also diminishes their athletic accomplishments, which should be the focus of discussion during the Olympics. The constant scrutiny of Shang's body demonstrates how women are still considered first and foremost in regard to their bodies, and not their achievements, athletic or otherwise. Olympians are arguably the most accomplished athletes in the world, and yet female Olympians — Shang is certainly is not alone in this — are constantly evaluated in terms of their bodies, and not their successes in their sport.

Let's take a moment to consider what it feels like to be Shang right about now. It must be incredibly upsetting for her when critics question whether she should be in the Olympics based on weight, height, and age. After the years of work she has put into gymnastics, it must be disheartening to finally make it to the Olympics, only to have so many people question whether she should even be there competing. It's especially disheartening when you consider that Shang qualifying for the Olympics proved that she is one of the best gymnasts in the world, and therefore deserves be there. This line of questioning all comes down to her body, which should not be up for discussion.

I'm going to repeat myself: Shang is an incredible athlete. The Chinese gymnast helped her team win third place in the women's all-around team competition. Then Shang placed fourth during the all-around individual finals, coming in only 0.016 points behind bronze medalist Aliya Mustafina. On Sunday, Shang placed fifth in the uneven bars final.

Shang has overcome difficult odds to become an Olympian. According to The South China Morning Post, she explained, "When I was young, my family had to ask around to borrow money so that I could continue training. My brother gave up going to school for me." It's truly horrible that the gymnast finally made it to the Olympics after years of unfathomably hard work, only to be subject to such sexist and demeaning critique. Yet Shang continues to prove her strength. The South China Morning Post reported that Shang is planning to return to the Olympics in 2020 to try for gold again. Now that should be a headline, not Shang's weight.

It's 2016, and I shouldn't have to explain just how wrong it is for female Olympians to be scrutinized for their bodies and not lauded for their athleticism. Shang is an incredible athlete, and that's why she should be making headlines.