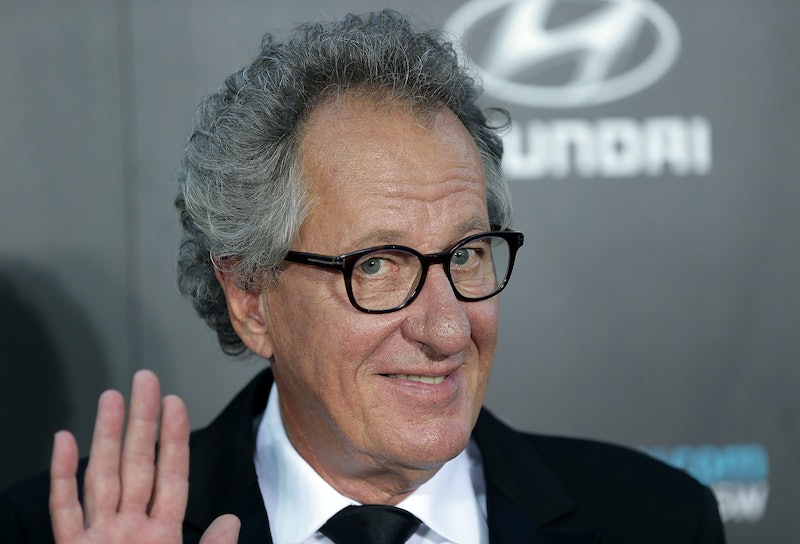 When we talk about "perfect casting," we're often using the term to either describe when a particular casting choice has matched up with our preconceived vision of a character (Sean Connery as James Bond), or in retrospect to describe an unconventional choice who turned out to be perfect for a role (Heath Ledger as The Joker). Occasionally, a certain bit of casting is so perfect, it seems like the actor in question was born to play the role. Case in point: Geoffrey Rush as Albert Einstein in Genius , an upcoming scripted series from National Geographic, as reported this Monday by TVLine.

Although Genius hasn't even started production yet — TVLine writes that the show will begin filming in Prague next month — there's still a lot we already know about this exciting new show: it is the first-ever scripted program for the network known more for nature programs than prestige dramas; it will be an anthology series that "will focus on a different innovator each season"; the first season is based on the 2007 biography Einstein: His Life And Universe by Walter Isaacson; Oscar-winning director Ron Howard (A Beautiful Mind) will helm the premiere; and Season 1 will also star British actor/musician Johnny Flynn (Clouds Of Sils Maria) as a younger Einstein.

Simply based on those facts, it's clear that National Geographic isn't holding anything back for its first foray into the crowded waters of scripted programming. In fact, it hits just about all the right notes for what — on paper, at least — should make an acclaimed, Emmy-winning series with a mathematical precision that would make Einstein himself proud. Our current era of "Peak TV" has seen the number of original series expand from 211 in 2009 to a whopping 409 in 2015 — a 94% increase since the year Obama took office — according to a study conducted by FX.

That increase has been so drastic not just because traditional content providers like broadcast networks (ABC, NBC) and premium channels (HBO, Showtime) have been upping their ante, but also because non-traditional platforms like streaming services (Netflix, Amazon Prime) and basic cable channels (WGN America, History Channel) more traditionally devoted to reality and documentary programming have been getting in on the game for the first time. It doesn't look like that Peak TV "bubble" doomsayers have been fretting about is going to pop anytime soon.

Additionally, it's no surprise that National Geographic's first scripted program is an anthology series; that format has proven to be wildly successful in recent years after Ryan Murphy singlehandedly reinvigorated the "limited series" with FX's American Horror Story five years ago. Since then, the likes of HBO's True Detective, FX's Fargo, ABC's American Crime, and FX's American Crime Story have all taken advantage of the resurgence to craft compelling, standalone stories that have, with few exceptions (True Detective Season 2 comes to mind) proven to be surefire Emmy magnets.

Finally, there's the hiring of feature film talent both in front of and behind the camera. This is a phenomenon that goes hand in hand with the anthology format, since it's much easier to attract well-known movie stars to television if they know they're committing to a close-ended project, rather than an ongoing series that might keep them tied up for years on end.

If it's true that Netflix uses a formula to predict what kinds of original programs its subscribers will enjoy, then it seems like National Geographic is following a similar formula while crafting their first attempt at a scripted drama. Hopefully it will prove as successful for them as House Of Cards and Orange Is The New Black were for Netflix — if only because I'd love to see future seasons of Genius starring Benedict Cumberbatch as Sir Isaac Newton or Jennifer Lawrence as Marie Curie.