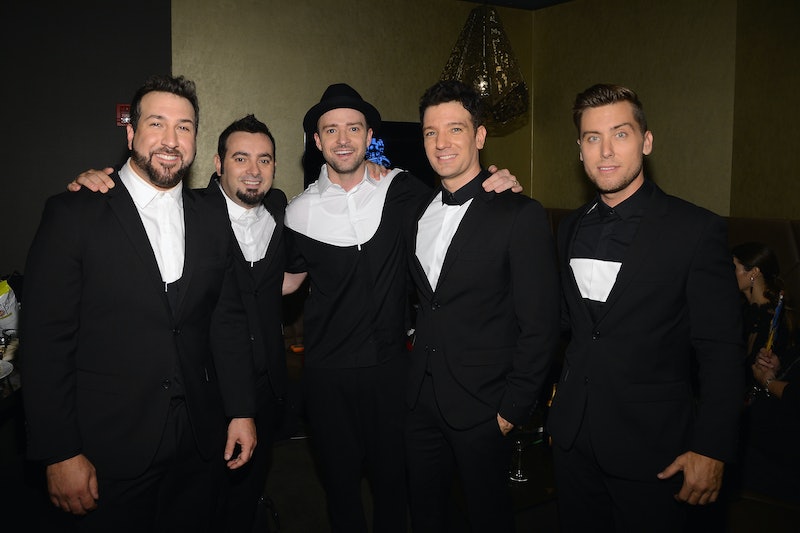 Last week, the entire Internet lost its chill over the photo of the decade. OK, that's a bit extreme, but boy band lovers might agree with me. Justin Timberlake posted a picture of himself with NSYNC members Lance Bass, Joey Fatone, JC Chasez, and Chris Kirkpatrick while reuniting for the first time possibly since the 2013 VMAs to celebrate Chasez’s 40th birthday. Time calls the photo “every boy band lover’s dream,” Elle says it’s “glorious,” and Today claims it’s “tearin' up our hearts.” And while anyone with a pulse hasn’t known what to do with themselves since seeing the photo, member Joey Fatone is wondering what-the-h is up with everyone’s radical behavior.

Bustle caught Fatone at the Sunday premiere of Kubo and the Two Strings in Los Angeles, where he says he found the whole spectacle over the photo quite amusing. “The funny part was that Justin took the picture, he’s like, ‘Oh, let’s take a picture of us,’ ‘cause we haven’t in, I don’t know how many years,” he says. “So he took the picture, put it up on Instagram and then it kinda blew up, I guess.” Gotta love the Internet. But still, didn’t the guys speculate the picture would make fans go nuts? Maybe a little?

“No!,” the 39-year-old claims, saying the reaction has been “so hilarious.” “After that many years, though? It’s like, c’mon. We’re not a group anymore!” he says. “But we’re still happy to be together. It’s so funny to me, ‘cause it’s just one of those things where you’re like, ‘Really?’ It’s like a picture. It’s weird,” Fatone explains.

Again, the wonders of the Internet.

It’s clear the photo wasn’t staged to purposefully create such buzz, and to Fatone, the crew is nothing but old pals who still enjoy just kicking it. Simple as that. “We all hung out and we were all ragging on each other like we normally do. Completely silly, talking about like old times and stuff like that,” he says. It seems not much has changed since the glorious ‘90s. “We’ve all kind of stayed the same, maybe just a tad wiser,” he says. “[But] not by much.”

Since the pic, there have already been rumors of a possible new album. And while I wouldn’t hate that at all, I feel like we should just let them live. In other words: your turn, Backstreet Boys.