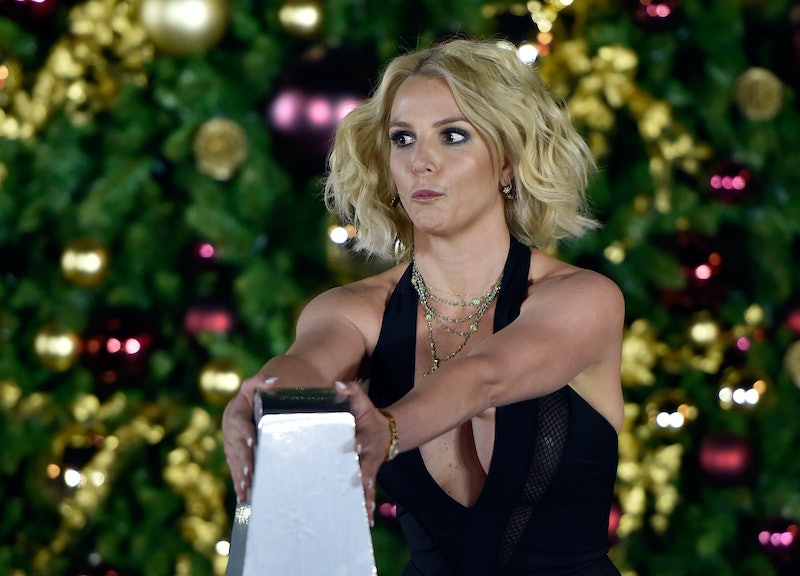 What do we have here? The Holy Spearit announced that she will unveil yet another tune from Glory before Glory drops on Aug. 26? Does her generosity know no bounds?! It's only been a few days since she released the sonic delight that is "Clumsy," but Godney, benevolent deity that she is, has has already lined up another gift for us. On Monday, pop idol Britney Spears tweeted, “DoYouWannaComeOver… Coming 8/18." As Entertainment Weekly points out, this tweet means what every respectable member of the Britney Army hopes it means: On Thursday, Britney Spears will drop new song “Do You Wanna Come Over."

So, what's "Do You Wanna Come Over" about? Assuming the title isn't a major misdirect, I'm inclined to believe it's about someone asking someone else if they wanna come over (I know, I know, I really went out on a limb with that one). But who is being invited over? And where is "over"? What's the full story?!

Without having heard even a millisecond of the song or having read a single lyric, I attempted to predict what "Do You Wanna Come Over" is about. I will share those predictions now.

Prediction #1: It’s a trop house song about asking your best work friend to come over to your cubicle so they can watch the gnarly blackhead extraction video your former classmate posted on Facebook.

Prediction #2: It’s an EDM banger about asking the kind Costco employee to come over to aisle 27 and help you lift the deceptively heavy bulk case of bottled Frappuccinos into your cart.

Prediction #4: It’s a synth-driven track about reluctantly inviting your friend’s friend over to your house to watch 10 Cloverfield Lane. Yeah, you like your friend’s friend, but the last time you watched a movie together, they talked the entire time.

Prediction #5: It’s an alt-pop song about inviting a friend over to stay at your house after they drop a bajillion hints that they’re having trouble sleeping at their place because their next-door neighbors just got a dog and it won’t stop howling.

Prediction #6: It’s a disco-funk jam about making way too much lasagna for just one person so you call your friend who lives five minutes away and ask if they want to swing by for dinner.

Prediction #7: It’s a show tune-esque song about accidentally texting “Do u wanna come over” to a phone number that used to belong to your friend (oops, looks like someone forgot to switch their contact's default digits) and then winding up in an awkward text conversation with a stranger.

Prediction #8: It’s a cover of Christina Aguilera’s “Come On Over (All I Want Is You)” but every lyric is now a question.