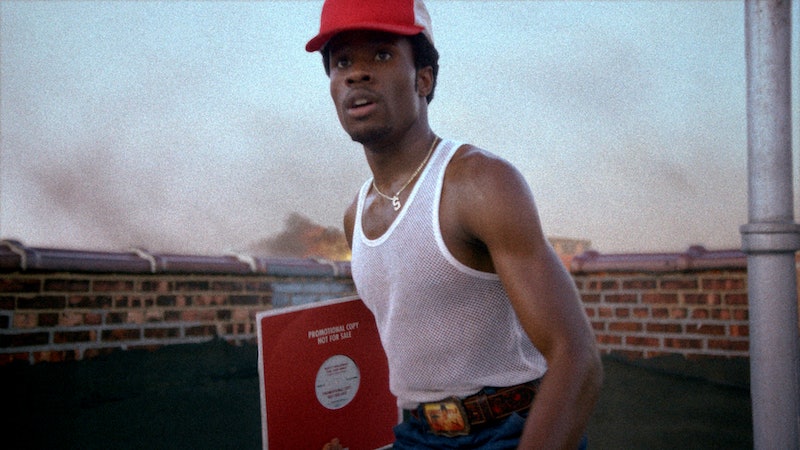 Since The Get Down premiered on Aug. 12, Netflix subscribers have done what they do best: immediately marathon it and begin obsessing over the exhilarating new series. And while all of the characters are deeply compelling, actor Shameik Moore in particular really captures the air of a late 1970s rapper, so is DJ Shaolin Fantastic a real person? The answer actually speaks to the way The Get Down approaches historical accuracy in general. The same way that the specific places and people in the Bronx are fictionalized rather than adapted, so too is Shaolin an original character who is inspired by the real history of hip hop rather than a figure taken directly from it.

The only real musical figure in the cast is Grandmaster Flash, Shaolin's mentor, who, according to Vanity Fair, also worked on the series and helped to ensure that the series felt truthful and was accurate in its depiction of early hip hop. So while Shaolin Fantastic isn't an actual rapper, he seems so real because the people behind the scenes were part of this time — including the real-life version of his on-screen mentor. As a result, the character has a lot of similarities to real figures from hip hop history. First things first: when it comes to his music, Shaolin is very similar to the artists who worked on the show, like the aforementioned Grandmaster Flash, Afrika Bambaataa, DJ Kool Herc, and Kurtis Blow, all of whom came into prominence in the late 1970s and early 1980s.

His name, "Shaolin," also seems like a nod to early hip hop group the Wu Tang Clan, who frequently attributed "the Shaolin" as their hometown, one of many Asian cinema nods in their work. One major difference, of course, is that the Wu Tang Clan hails from Staten Island (well, several members do, overall associating the group with the borough) rather than the Bronx. Another is that the group wouldn't emerge for over a decade, so their musical stylings have no effect on Shaolin Fantastic's. But it certainly feels like a deliberate allusion — any rap fan would associate a love of kung fu films with the group.

There are other aspects of Shaolin Fantastic's character that reference hip hop history, like his clothes. He wears a lot of bright red, which could be a nod towards the iconic Adidas tracksuits worn by Run-D.M.C., an early '80s Queens group, and he also has a lot of pride in his "pristine" Puma sneakers, which costume designer Jeriana San Juan told Fashionista are period accurate. And if you look at him in any given scene, he's identical to a member of Grandmaster Flash's crew, who, according to Complex's fashion hip hop roundup, deliberately "looked just like a lot of other kids in New York at the time."

Between his musical abilities, his name, and his style, DJ Shaolin Fantastic may not be a real member of hip hop's inaugural class, but he would have fit right in with them thanks to the meticulous work that happened behind the scenes of The Get Down.