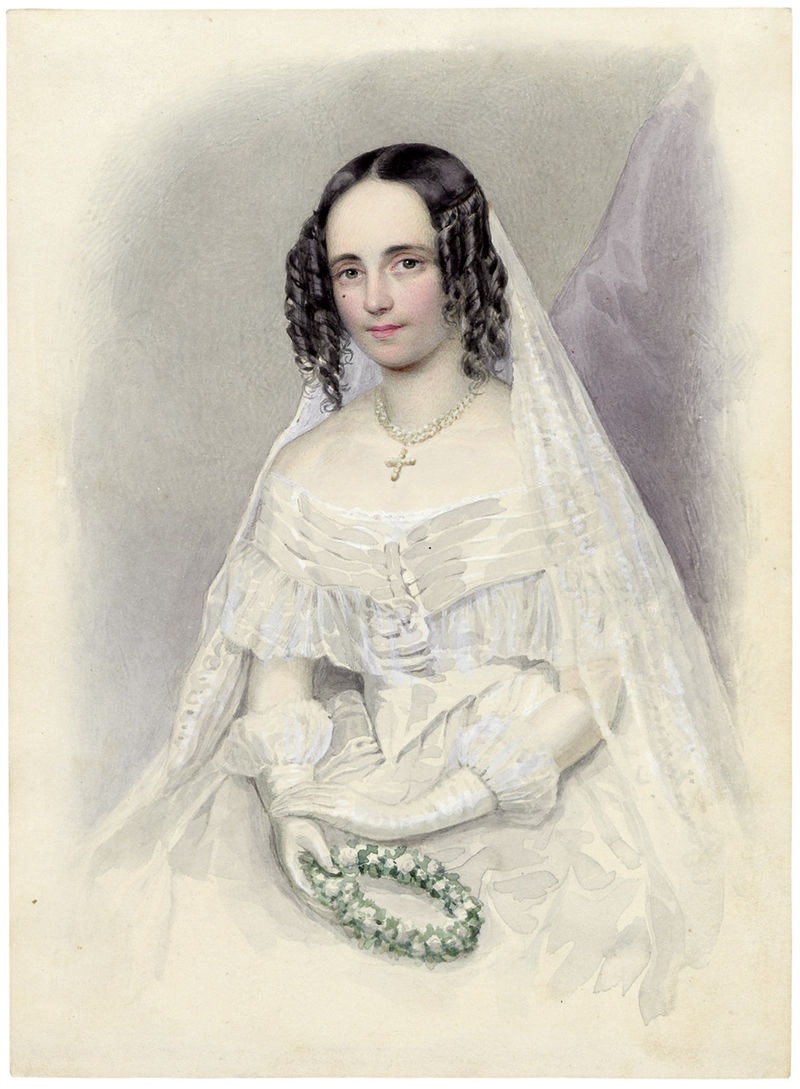 No spouse on the horizon for yourself (and possibly happier that way)? Congratulations! But the history of singledom for women hasn't always been a particularly pleasant situation; aside from constant needling to settle down and pop out babies, they've had to cope with societal suspicion about whether they worship the devil, people trying to encourage them to frisk new brides, a studied aversion to peacock feathers, and other bizarre procedures and traditions. While it's not true to allege that no past historical civilization had a good place for the single woman (there's evidence of societal power and privilege held by single women, particularly widows, in ancient Rome and elsewhere), we are now recognizing the unmarried woman as a serious societal entity: New York Magazine in February called them America's "most potent political force".

But unmarried virgins in many historical civilizations were often regarded as both ideal and somehow incomplete, because they were simultaneously virtuous and not yet able to fulfill their "true" purpose as women (lots and lots of babies, obviously). As I've written before, virgins themselves were thought to have the potential to spoil fruit and tame lions. But virginity isn't the same thing as remaining single, though for many women there was supposed to be considerable overlap; widows and divorcees were often included in the "unmarried" category, with all its associated weird traditions and superstitions.

Let's get into five of the weirdest beliefs about unmarried women in history. At least if anybody accuses you of being a spinster, you can lecture them about etymology before throwing a punch.

1. That They Should Be The Only Women Allowed To Watch The Olympics

The life of an unmarried woman wasn't so bad in ancient Greece, provided you occupied a particular status. Vestal Virgins, or women who pledged to remain celibate and unmarried for their lifetimes in order to tend the sacred flame of the goddess Vesta at her temple in Rome, were the highest-regarded women in the entire State, and received privileges worthy of that. But unmarried women in general were also given one of the best tickets in the land: access to the Olympic Games.

We're told by an ancient Greek writer that Parthenous ouk eirgousi theasthai, "they don't stop virgins attending the Games". Married women, on the other hand, were prohibited. The reasoning was that parthenoi, as unmarried virgins were called, were seen as spiritually "pure," while married women weren't any longer. The best bit about this strange law was that Olympic sport was at the time performed entirely naked. Unmarried ladies had the best ogling opportunity of them all.

2. That They're More Likely To Be Witches

This is one of the most worrisome parts of single-lady history: their socio-economic position, as outsiders in traditionally patriarchal environments, meant that unmarried women were often the target of suspicion or oppression when anything went wrong. "It was," writes historian Brian Levack in a history of the Baroque period in Europe, "a question of both protection and control." According to Levack, husbands could both help their wives out of trouble with lawmakers looking for witches and tightly control their behavior so they didn't do anything suspicious. But it's more than that.

Levack explains that unmarried women were much more likely to be viewed malevolently by their community when economic or martial tragedies had just happened; plagues and wars tended to cull the male population, drastically reduce the amount of money to go around, and swell the amount of war widows and women without prospects of marriage (because all the available dudes were dead). It was basically a perfect storm: chaotic society with a lot of women and no real way to support them within families any more. People perceived as burdens on society, as we well know by now, tend to get the bulk of xenophobia and hatred. (It may not have been all accusation, either; The Encyclopedia Of Women In The Renaissance points out that some unmarried ladies may have embraced the rumors of their powers, because it might terrify other people into leaving them alone — or asking for their help.)

3. That They Should Be Allowed To Mug Brides

Superstitions around unmarried women tend to surround ways in which they can get married. Some modern wedding guests still use the old English practice of sleeping with a slice of wedding cake under their pillow in order to "see" their future spouse in their dreams (always for women, weirdly enough; unmarried men would presumably know her when they saw her). You may well think these superstitions are deeply sexist and ridiculous in their assumption that every single lady wants to get married; but, of course, most of them date from periods where, as the 17th-century midwifery manual author Jan Sharp put it, they were seen as bizarrely "self-destroying," as "almost all men and women desire to be fruitful naturally". (And you think your mother lays on the pressure.)

But in both Northwestern France and Wales, a practice emerged that would be seen as deeply lacking in health and safety today. Brides were encouraged to wear multiple pins in their gowns, and in France all the unmarried women in the wedding party were encouraged to search her all over for them; if they found one and it was straight, they'd be married themselves. In Wales, they cut out the middle man, and the Welsh bride just threw a pin over her shoulder into a group of (presumably rather careful) single women.

4. That They're Doomed By Peacock Feathers

Peacock feathers are an extremely pretty addition to household decoration (though, presumably, bad luck for the peacock), but according to Mediterranean tradition, they're extremely bad luck for any woman who wants to get married. The bad luck comes from the resemblance of the peacock tail to the eye the eye of the Biblical demon Lilith, Adam's first wife, a figure who in Old Testament tradition was cast out of Eden for some kind of disagreement (possibly involving her wish to remain equal to Adam). Accordingly, peacock feathers are basically seen as the "feminist killjoys" of the animal world; they doom any marriage in which they're featured to failure, and if present in a house are supposed to mean that any unmarried woman will never attract a spouse.

5. That They're Supposed To Spin For Their Supper

"Spinster" itself in English is an extremely old-fashioned word, but you may be surprised to know that its origins actually did involve spinning — and were also applied to men. In late medieval England, spinning was intimately associated with the marriageability of women; one text alleges that women were only viewed as marriageable once they'd spun themselves all the table and bed linen they'd need for their marriage. There's also disagreement about whether spinning had any impact on heraldry, the ancient way in which noble European families displayed their "coat of arms". Unmarried noble women in English tradition usually display their arms on a "lozenge," which some people argue was originally meant to look a bit like a spindle, the traditional way in which one spun.

The term "spinster" had to be divided from "spinner," which was the word for a man that spun, and was also the legal term for an unmarried woman in England from the 1600s to the 1900s; lawyers from the period weren't actually being insulting, just accurate.