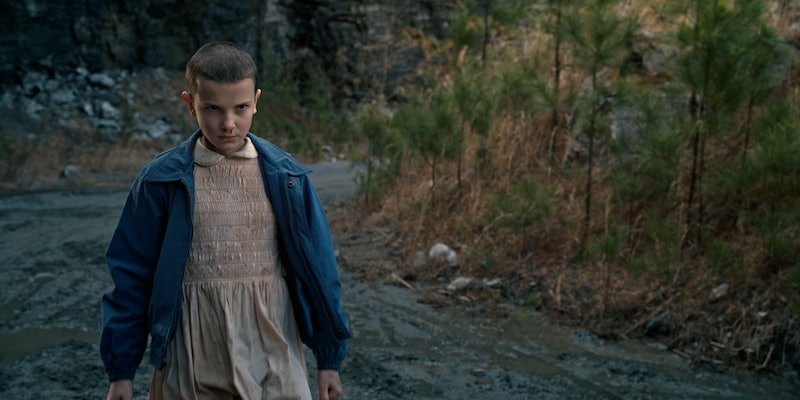 Ever since sci-fi series Stranger Things dropped on Netflix in Jul. 2016, it seems the entire world — myself included — has grown obsessed. So what better time is there to rock some Stranger Things clothes and accessories inspired by the series? There are a whole host of reasons to love the Netflix newcomer, from Winona Ryder’s amazing comeback as a mother pushed to the edge while searching for her missing son, to Eleven’s badass attitude and telekinetic powers. But for those of us who gorged on all the episodes in an almost-embarrassingly short amount of time, there is a way to fill the Stranger Things-shaped hole in our lives while we wait for Season 2 to drop: shopping.

Thankfully, the web is full of Stranger Things-inspired merchandise to evoke the characters and plot lines of the TV show. Not only has the internet provided us with T-shirts, badges, pins, and tote bags pulling direct references from the series, but the ‘80s throwback has inspired many of us to root around the back of our closets (or at our local thrift stores) for nostalgic items with which to recreate the characters' signature styles.

Whether you believe in justice for Barb, have a nagging craving for waffles, or are still campaigning to Free Winona, below are 11 items to add fire to the flames of your Stranger Things obsession.

There's no denying it: Barb has great style. She may be somewhat nerdy, but her taste in clothes is totally reminiscent of Gucci's current season. While full-on '80s might not be a look you're ready to commit to (I know I'm not), a subtle, shimmery mint green eyeshadow might just be the perfect way to bring Barb's look back into the 21st century.

Whether you buy vintage or just borrow your grandma, oversized frames are making a comeback — and Barb is fully to blame.

3. Wear Eleven On Your Sleeve

Eleven is arguably the most badass character in Stranger Things, and the strong female lead we all deserve. Show your appreciation for her with this enamel pin depiction of the character, bloodied nose and all.

And release your inner nerd.

Vintagey What About Barb? T-Shirt, $28, etsy.com/PopPastiche

The internet has been quick to point out that Barb is arguably one of the most under-appreciated characters within the series. If, like many of us, you're upset by her lack of a proper send-off, this tee should ensure that everyone else knows it.

6. Throw It Back With A "Free Winona" Tee

Originally designed and popularized during Ryder's shoplifting conviction and controversy in 2002, the infamous "Free Winona" tees are making a comeback for 2016, just like Ryder herself.

7. Kit Out Your Keychain

This one's perfect for remembering a lil' nugget of Dustin's sound advice every time you open your front door.

8. Let Your Book Bag Reflect Your Taste In Television

The opening credits for Stranger Things have almost received as much love as the series itself, making this tote bag a safe sartorial choice.

This name tag-style necklace may go over the heads of those non-committal viewers of the show, but those who get it will get it. This copper neckpiece is the perfect way to show your appreciation for all things Stranger Things.

10. Or Show Some Love For Her Favorite Snack

I'll be shocked if Eleven doesn't become the official poster girl for frozen waffles. But while we wait for that to happen, this tee will have to do.

11. Spell It Out With This Enamel Pin

This one is for folks who, like me, are now left flinching at the smallest sign of a flickering bulb on their once-cute fairy lights. The pin may not warn off your nightmares, but it's definitely a cute addition to any jacket.

I may never trust sources of electricity again, but a re-watch of the series while I wait for the mailman to drop these goodies on my doorstep will certainly keep me occupied.